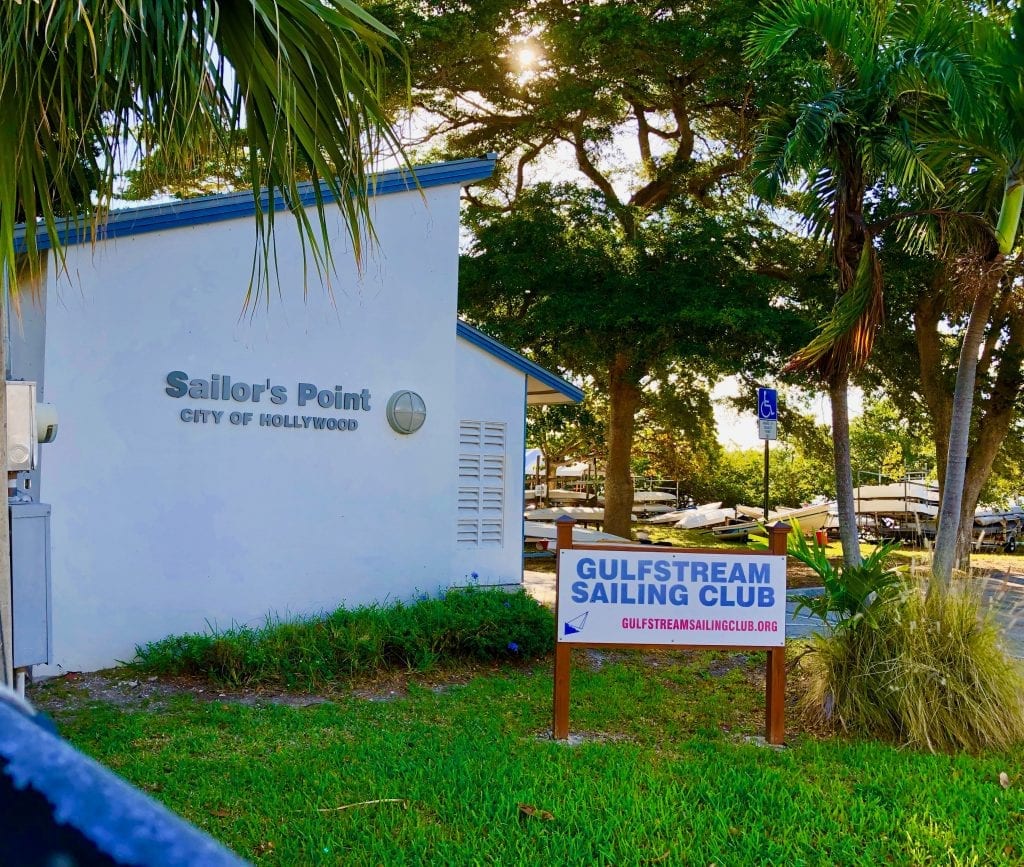 There’s a beautiful little spot on a corner jutting into North Lake in the Lakes area of Hollywood and everyone calls it Sailor’s Point.  It’s a lovely place for a picnic, and the home of the Gulfstream Sailing Club, which has been leasing the property from the city for a dollar a year since 1992, and uses the property to teach club youth as well as adults how to sail.

But that’s about all that is known about the land located at 921 N Northlake Drive, other than as far back as anyone can recall it has been known as Sailor’s Point. So I decided to play Real Estate Detective set out to discover why this prime piece of Hollywood real estate, with waterfront exposures that would keep a backyard cool in the summer and sunny in the winter, was never sold and built on.  What I found were a lot of very knowledgeable locals who were just as curious as I was as to how the city came to own this land, and when exactly it started to be known as Sailor’s Point.

No deed can be found at the county, and as far as they are concerned, the city has always been the owner. There is no recorded sale. But, digging further, I eventually found one local who told me that the land was donated to the city by a Hollywood physician named Elbert McLaury, for the sole purpose of teaching youths how to sail.

Interestingly, Dr. McLaury built a home at 903 North Southlake Drive one of the first large homes to be built on North Southlake at the time. This lot is the exact same lot as Sailor’s Point, only situated on Southlake instead of Northlake.  So the good Doctor did indeed get his fabulous waterfront yard with the perfect all year ‘round exposures. But I digress.

The city has no historical information on the Sailor’s Point property, other than a park brochure from the late ‘70s listing it as a passive park, one “which emphasizes the open-space aspect of a park and allows for the preservation of natural habitat” per Wikipedia.

Some of the native locals tell me they had sailing lessons there as far back as the late ‘50s as a summer recreation program. The Concrete ramps were there in the late ‘60s and perhaps even later.  Aerial photos from the 50’s clearly show Sailor’s Point with what appear to be boats on a big cleared lot.

While digging I also discovered that N. North Lake Drive was originally going to be the alleyway for homes facing North Lake. Pierce Street would have been in front of the homes along the seawall of North Lake, all the way to 9th Avenue. The homes were to be situated on the other side of the roadway, just like at the heads of both Lakes and the very east ends of all the Lake Drives.   This would have made for a very scenic drive for motorists, four miles around both lakes and the Intracoastal.

In a Hollywood Reporter dated from 1923: 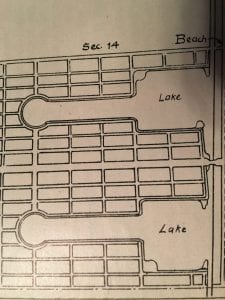 “Around the artificial lakes will be sweeping drives, approximately 4 miles in extent. Between the drives and the water will be beautiful parkways and walks bordering the lakes. One can imagine how attractive automobilists will find the lake drives, with a fascinating body of water before them and the refreshing greenery of varied vegetation to charm the eye along the roadway.

Wow, sign me up Mr. Young! No wonder people were clamoring down here in the ‘20s!

This street plan was intended for both North and South Lakes;  no houses were to be situated right on the Lakes. This explains why the avenues dead end into the Lakes.  The Avenues would have intersected with the streets that bordered the Lakes. This change in roadway plan also explains why we have some houses on Polk and Buchanan with no alleys and street frontage on both sides.  The same layout exists on South Lake with Van Buren and Jefferson Streets having no alleys. 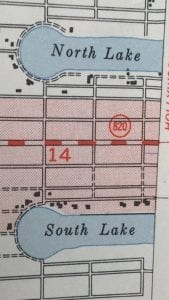 The city vacated its rights of way (the dead ends at the lakes) in 1936, but kept the avenues for utilities and drainage. I viewed plats from 1945 that show very few homes on the lakes but still showed some of the originally planned roadways along the border of the lake. Plats from the ‘20s do not show North Lake or South Lake Drives.

I don’t know about you, but I grew up in Hollywood and to this day I still pause every time I say one of the Lake Drive names — you have to think about what side of the lake you are on and which lake you are talking about when referring to an address one of the Lakes.

So, back to Sailor’s Point.  It stayed a city right of way and was turned into a park where Pierce Street would have dead-ended and turned North to 9th Avenue.

Well, we almost lost this valuable open space when the city considered selling off several city-owned properties. Thanks to the efforts of the Hollywood Lakes Civic Assn. and local residents the city heard loud and clear this property should not be sold. A 2002 survey showed a whopping 97% of residents were against selling Sailor’s Point. If the Dr. Elbert McLaury story is true I’m not sure the city should have even considered selling land a resident donated for the purpose of recreational sailing.

A search for information on Dr. McLaury turned up the information that he and his wife, Rosalind, were indeed known as great philanthropists known for their generosity in the city, so chances are that the story is indeed true.

Mrs. McLaury’s obituary from 1998, when she died at age 95, painted her as a generous, modest woman who had lived in Hollywood for most of her life. 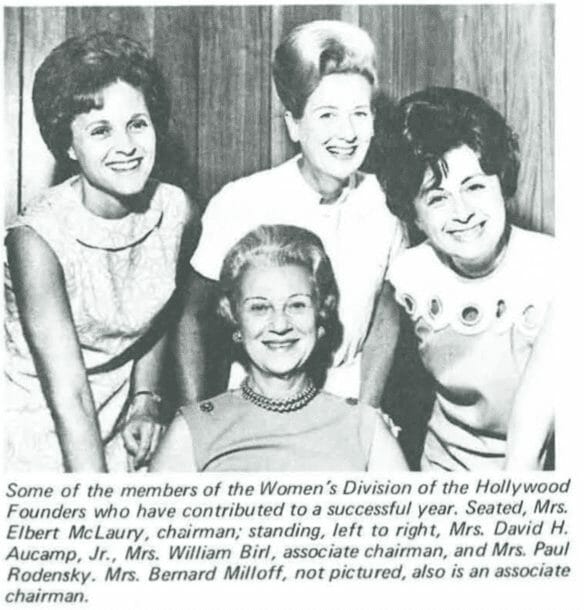 “In the late 1920s, Mrs. McLaury and her husband, Dr. Elbert McLaury, moved to Hollywood from New York. Together they established a clinic that is Hollywood’s oldest operating medical office.

During World War II, Mrs. McLaury helped her husband through a labor shortage by working at the clinic.

For almost 30 years, Mrs. McLaury was a fund-raiser for The American Cancer Society’s annual Our Race for Life luncheon and day at the races at Gulfstream Park in Hallandale.”

“She was the kind of woman you had a great deal of respect and admiration for, and you could depend on her year after year,” said Marilyn Myers, co-founder of Our Race for Life. “You wouldn’t even know that she’s gone because everything she’s done is still alive Dr. McLaury died in October 1983 at the age of 83.  He was a native of Waycross, GA and a graduate of Emory University Medical School.  here. She left her mark.”

Dr. McLaury died in October 1983 at the age of 83.  He was a native of Waycross, GA and a graduate of Emory University Medical School.

He was a co-founder of Hollywood Hospital and Hollywood Clinic. He had been president of the Broward County Medical Association and a Mason.  He established the Religio-Psychiatric Clinic of the First Presbyterian Church of Hollywood and worked with Dr. Norman Vincent Peale’s clinic in New York.

Prior to the city considering the sale, Sailor’s Point was not utilized much by local residents and there were no facilities or storage buildings on site.  But along with the decision not to sell, the city decided to build bathroom facilities as well as storage for boats.

So although we don’t have a sweeping, beautifully landscaped four-mile drive around North and South Lakes, we do have Sailor’s Point and the lovely curves at the heads of both lakes,  which is where you’ll find many people enjoying the views, exactly as Joe Young envisioned over 90 years ago!