HOLLYWOOD HISTORY : WHO WAS HERB TULK? 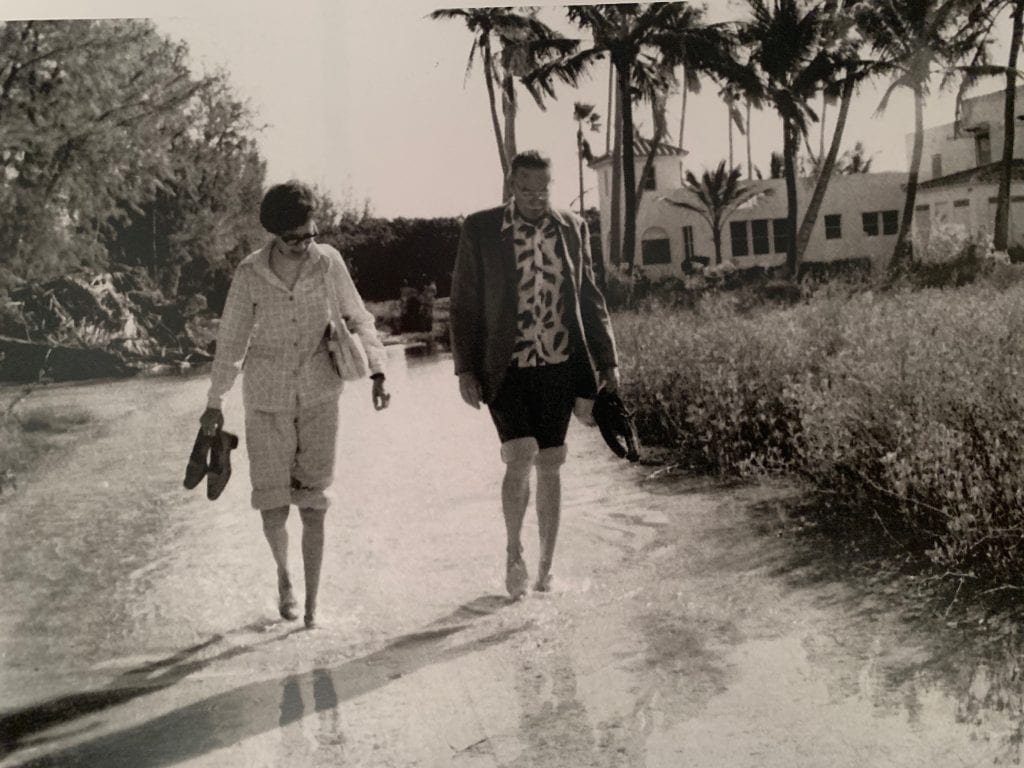 Unheralded Supporter of the Arts in Hollywood

Like so many of my stories for the Hollywood Gazette, I start off writing about one topic and end up finding out that the real story is hiding behind my original one.  This is one of those times.

The story begins with a beautiful home that once stood in the area now known as Holland Park, at the foot of Johnson Street at the Intracoastal.  If you’ve ever put a boat into the water in North Lake, or headed over for a picnic under the trees, you know the spot.

And if you’ve ever enjoyed the peace and serenity of Holland Park, you should know about Herb Tulk and his wife, Gert.

The home under discussion was built in 1925 and sat just west of the main entrance to the park, at the base of West Lake facing north.  The address was shown as Johnson Street, but the lot was actually at 935 Grant Street.

According to an article in the old Hollywood Sun-Tattler, the house was built by Herb Tulk’s aunt Julia Hitchcock in 1925, with an addition put in about ten years later. It was a handsome home in the typical Spanish Mediterranean style, complete with fireplace, arched windows and a beautiful porch facing West Lake.

Mr. Tulk inherited the home after Julia’s death sometime in the ‘60s.  Articles from the Sun-Tattler state that Julia Hitchcock drowned in West Lake.  No explanation was offered as to just how an individual could drown in a lake that is only waist deep at high tide, but that’s a story for another issue. 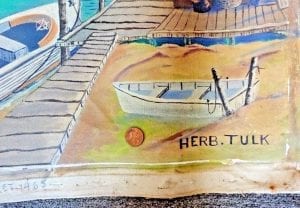 Although this area north of Johnson and east of 13th Avenue had been platted with individual lots and street names, it was never developed, so this beautiful house stood alone for decades in the wilderness that eventually became West Lake Park. This was the only house that was ever built north of Johnson Street and east of 15th Avenue. Had the proposed development come to this particular area, this would have been one of the finest lots to be had in West Lake.

Surrounded by nature, it is said that Mr. Tulk talked of seeing foxes, panthers, and raccoons on his property, and he enjoyed fishing from his front lawn. There is no mention of sand fleas or mosquitoes but you can just imagine.

Mr. Tulk and his wife were both also artists and it turns out, activists for the arts community.  According to an article by staff writer Marla Williams in the Sun-Sentinel in October 1987, Herb, a painter and art restorer, and Gert, a sculptor, moved to Hollywood from a small town in New Hampshire and settled into the home in Holland Park.

One night, the Tulks met a group of artists selling paintings from sidewalk stands on Hollywood Boulevard.  Surprised to learn that there was nowhere but the sidewalk for the artists to show and sell their work, they began a search for a permanent home for local artists.  Little did they know that this search would develop into a lifelong passion.

Activists at heart, the Tulks organized protests outside local grocery stores where mass-produced art was being sold, ran for public office, and rallied for a formal countywide Council on the Arts.

“Art is the basis of civilization,” Gert is quoted as saying. “It’s incredible, no, it’s irresponsible more isn’t being done to promote the arts here.”

Over the next few decades, the Tulks continued campaigning for an arts council, and were involved in setting up a non-profit corporation dedicated to building a museum and carving out a place for local artists, by organizing shows and a small gallery, dubbed the Hollywood Art Museum.

The Tulks operated the private, non-profit, always moving and changing Hollywood Art Museum from 1962 through at least 1987, when the Sun-Sentinel article was written. They put on shows throughout Broward, financed by private donations and bringing in artists from around the world. Working with a volunteer staff, they leased a small building on Hollywood Boulevard from Sun Bank for $1 a year, until the bank renovated the property at the end of 1987.  They then moved temporarily to 1843 Hollywood Blvd, a building owned by Home Savings president Tommy Wohl, at the same rent, until the building was demolished. 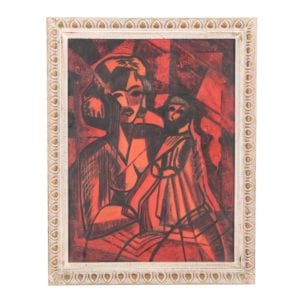 Dave Racaluto, a friend of the couple and vice president of the Museum, was quoted in the article as saying “If you searched for the next 50 years of your life, I don’t think you’d find two more dedicated people. I don’t think Hollywood would even know how to spell art if it weren’t for the Tulks.”

All this time, the house in Holland Park was a gathering place of bohemian minds and talented artists of the time.  Herb and Gert enjoyed this piece of paradise until the late ‘70s when the city decided to expand Holland Park, and the Tulks’ house stood in the way.

In 1977, after a lengthy court battle, the city used its power of eminent domain against the Tulks and took the house for the sum of $140,000.

Many people in the community were outraged that the city would take this beautiful house from its wonderful owners and were hoping that the city would at least incorporate this historic structure into the park. Unfortunately, however, after the city acquired the property, it did not maintain it and it was repeatedly vandalized.

The city eventually declared the building unsafe and gave it to the Fire Department to use for training.  To add insult to injury, the house was so well built that when it was intentionally set on fire, it would not burn, and they had to send out for more fuel to get the fire going.

And the most ironic thing of all about this story is that the area where the house stood is not used at all, or accessible by the public in any way.

So the next time you find yourself in Holland Park,  make a left at the entrance and walk down the little-used path about halfway to the end and face north, and say a quick thank you to Herb and Gert Tulk for their support of the arts in Hollywood.   If you could remove the trees, you would have an unobstructed view of the lake all the way to Sheridan Street and you can see where their house once stood, where bohemians and artists gathered and Herb would fish from the front yard.