The Cops, the Homeless Family, the Kind Hotel Manager and a Fresh Start in Hollywood 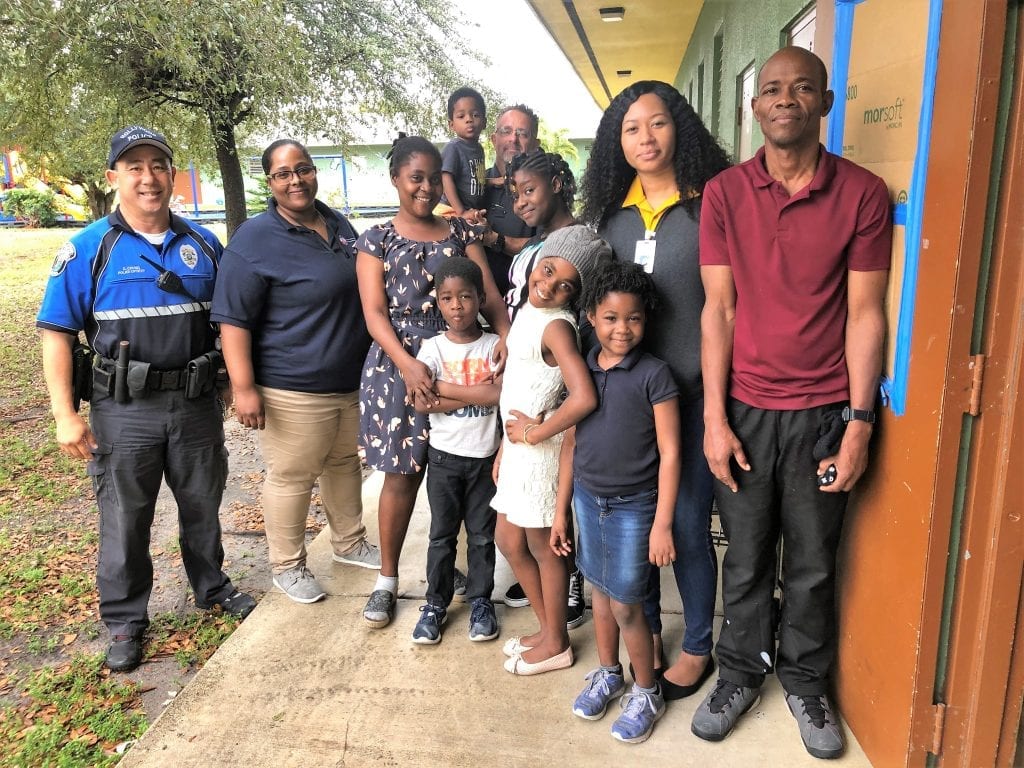 These three generous Hollywood citizens met a local family in need and, rather than looking away, they went out of their ways to help.  The Hollywood Gazette sat down with them to learn more about how it all happened.

Hollywood Gazette:  So how did you meet this family?

Anthony Truntz:  About a month ago, I was working security at Attucks Middle School, in Liberia, and I was talking with the security lady that monitors the front gate when she pointed out Mr. Jean walking with three young kids and she told me that they were a family of seven and that they were homeless.  I had a translator come out because he only spoke Creole.  We started asking questions, and we found out that they were currently living in the back of a church on Dixie Highway.  They’d only been in the country for a short time.

Dwayne Chung:  Since about October.  And before that, they had been waiting for a long time for their sponsorship papers to come through.

AT: They had been staying with Mr. Jacques’s sister and somehow they all got kicked out of the apartment, and then at a motel for a few days, then they got kicked out of there — they probably didn’t have enough money — somehow they went to the church which was being renovated. They were staying in a back room, they had only bathrooms and sinks in the back, no showers, and they had some supplies but they didn’t have that much, and they didn’t know how much longer they would be able to stay at the church.  So we started rallying the troops.

DC:  We are both Downtown NTLs (Neighborhood Team Leaders) and we work a lot with the Broward Outreach Center shelter and the Jubilee Food Kitchen.

AT: And we are both on the Hollywood Police Department Homeless Task Force, part of the multi-agency Homeless Task Force, run by the Broward Sheriff’s Office. We go to meetings once a month and talk about new ways to help, and how to get resources, and we share all the info.

DC: Ms.Kara was very helpful, and the Jubilee Center was very helpful.  First, we took them to meet the Homeless Task Force, to see about finding them some housing, and then to Hispanic Unity of South Florida, who helped them sign up for Medicaid and some SNAP food benefits through the state.

AT: After that, I took them for lunch a couple of times, me and Officer Chung, and then Miss Kara got involved again and she put out the word for help for the family and she got them a bunch of supplies.

DC: And we got them clothes from Jubilee, and food from the food pantry — once every seven days they are allowed to pick up a box of food for the family.

And we let them know that if they wanted to, they could eat every day for free — but that’s not the greatest environment for the kids…

AT: At the place, they are now, they’re lucky —  if they’re not at school, they get fed three times a day, so they don’t have to worry about that for now.

DC: They will not go hungry.

AT: So they started getting different things, and Officer Chung has a friend that donated a bunch of Publix gift cards that we gave them for food and stuff, and we ended up getting them all kinds of things — even the Executive director of Jubilee, LeAnna Vasquez, got involved.   She went out to Walmart and got them some stuff on her own.

Anyway, we just got to work and kept tabs on the family, and they have my cell phone and when they have a question I would try to get somebody to translate.  And lately they’ve been communicating by phone and they have some app that translates and lately, the main thing we’ve got going on is that Ms. Kara was able to give them both employment!

Kara Lundgren:  Yes, well, these guys, who I’ve been working with a lot, called me one afternoon and started asking about housing, well, that was the first immediate need, but more than that, what I have is the ability to find them work.  I have jobs.

Jacques started about three weeks ago, he’s stewarding, he’s doing great!   And his wife, Ghislaine, she’s a school teacher by trade — she has the nicest penmanship I’ve ever seen! — is actually starting today.   So he’s been here three weeks, he has full-time work, with benefits after 60 days like all associates, and she’ll be working in front of the house as a server assistant.

He speaks to me every single day in English now,  we work with him every day.  They are the most polite, kindest people you’ve ever met, and he works really really hard. And they have five really cute kids.

KL: They have a good, solid family unit.  So starting tonight she’s here, part-time because they have small children at home so they have to work opposite schedules — which is fine, we have plenty of things that can be done at all hours here —  and what I would really like would be for us to help her get back to school, so that she can be a teacher here in the US, for which we have a lot of need.

Hollywood Gazette: So where are they now?

DC: They’re living at a temporary shelter at the Homeless Assessment Center, the North HAC, in Pompano. And they’re now in line to get permanent housing.

AT: Now we have to wait and see how the system plays out.

HG: How does someone get into the system?

AT: We started by having them meet with the task force, getting them interviewed to see what their needs are. Then they’re put on the list for housing according to their situation.

DC: We think the Jeans will get a little priority because they have young children; the state doesn’t want children on the street.

AT: So as soon as they got the temporary housing, we picked up a truck from the HPD motor pool, took it to the church, loaded it up, drove them to Pompano and moved them in.  They were assigned a social worker to set them up, help them adjust, change the kids’ schools and get working on getting them in to a permanent home.

DC: Very much so.

But, we really haven’t spoken much about Ms. Kara, and I do have to let you know about this, but Ms. Kara did provide a lot of assistance for this family.  I mean, she has a huge network of people who supplied food and clothes and school supplies.

And then the jobs.  That is so very, very important.

AT: The kids even got toys,  too, from Ms. Kara.   If you saw the family now, they’re so very happy to be there, there’s nothing but smiles. Really.

They actually text me every day, sometimes the kids get ahold of the phone and text me weird stuff!

HG: How can anyone help, this family, or the situation in general?

For the Jeans, it was important for them to be a family. They believe in the family unit, they wanted to stay together and our goal was to figure out a way to make that happen. That’s their core value system, that’s the core value systems of the officers, that’s who they are, all we can do is help develop and grow that, and keep spreading those things.

It’s paying it forward. These people, I am sure because I know them now, they will do the same thing, they will help somebody else.

DC:  One person at a time.  Every little bit helps.

KL: It’s just about everybody taking the next step.  There is a whole task force, through the city. These officers, being on the task force, they’ve been out there, gathering data, working with the BSO and the whole team, they knew the steps.  We’ve already done it and we can do it again. And it changed our community.

Really, everybody has to be kind.  It’s about doing what you can in your own community. In your own environment, These officers saw a need; somebody reached out to them and they were able to place the pieces together.

There are a lot of people that need help, be it the homeless, or the working poor. but there are a lot of opportunities to give back.  We live in a very giving community, so it’s just about reaching out for what you believe in. Whether it’s your church’s resource center or a domestic abuse center or outreach center or your children’s schools. Each of the schools in the public school system knows which families might have needs and they will share it if you ask them.

The county has a huge Homeless Rehousing program going on right now.  They were able to move all of the homeless out of the tent city in downtown Fort Lauderdale. Hollywood and Pompano are next.

It’s just about reaching out and taking the next step.

If you’re experiencing homelessness or in danger of becoming homeless, call the Homeless Helpline at 954 563 HELP (4357), or you can email Officer Dwayne Chung at dchung@hollywoodfl.org.

If you have a property that you would like to rent to the city to house the homeless, or you would like to make a donation, or if you have any other questions or ideas about how you can help, please contact Barbara Lawson, the Social Services Coordinator for the City of Hollywood.  She can be reached at 954-924-2952 or via email at blawason@hollywoodfl.org.  If you have a unit to rent, you will receive compensation.