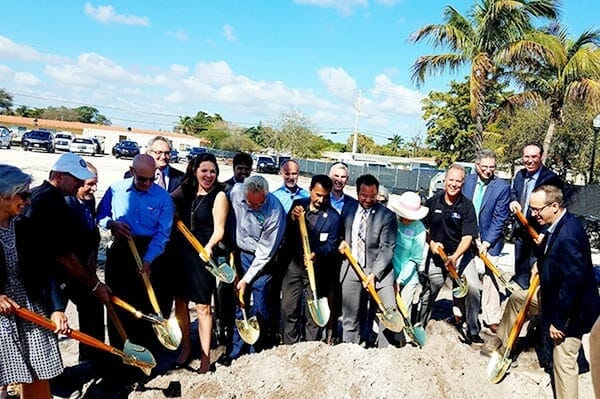 Pinnacle at Peacefield, a unique public/private partnership 20 years in the making, is celebrating its groundbreaking.

The project is a partnership between the Pinnacle Housing Group and the City of Hollywood.

When complete, Pinnacle at Peacefield will offer 120 units — 72 one-bedroom units and 48 two-bedroom units spread over three low-rise buildings — of housing for those age 62 and up on land assembled by the City of Hollywood and the Hollywood Community Redevelopment Agency.

The community, which is less than a mile from Hollywood’s downtown area and Young Circle, will offer the latest in quality affordable design. Each building will have its own dedicated common facilities including a lounge and meeting space, computer center, outdoor patio, fitness facility and medical evaluation room.

Timothy Wheat, regional vice president of Pinnacle Housing Group, said that this project marks Pinnacle’s third development in the City of Hollywood. “We are reaching a crisis-level shortage of housing for seniors in Florida,” Wheat said.  “[W]e are elated to provide 120 units along with much needed services and support that will make elderly lives easier.”

Mayor Josh Levy has said that he is impressed with the partnership the City of Hollywood has had with Pinnacle Housing Group. “With quality construction and thoughtful amenities, Pinnacle at Peacefield will ensure our valued residents have the support and resources they need to live and thrive,” Levy said. “I look forward to returning to welcome them to their new homes.”

Construction of the senior affordable housing development at 2122 Adams St. in Hollywood is projected to be completed in early 2020.

“When I first began as a City Commissioner in Hollywood back in 2000, this section of land was overrun by drugs, broken homes, and poor conditions. One of my very first priorities was to replace the substandard housing at this location and improve this area so our residents could live in a safer, better place,” he said.

“Many options were considered, and the substandard apartments were finally razed, leading to an 88 percent drop in crime. But a permanent solution that would provide more housing was still needed,” continued Furr.

“It has been a very long time coming, but that solution is finally here with the Pinnacle at Peacefield.”