Tales of the Real Beauty Queens of Old Hollywood Beach

“They’re not only attractive, but they can cook, sew and keep house too!” proclaims a Hollywood Sun-Tattler headline from 1953.

We’ve sure come a long way since the early days of the Miss Hollywood and Mrs. Hollywood pageants.  The competitions have been held here from the 1920s until 2017, with a 40-year hiatus from 1965 till 2004.

Probably most revealing about the early competitions, and the times, are the captions on the newspaper photos of the beauty queens.  When the papers actually deigned to write the lady’s first name instead of her husband’s (i.e. Mrs. Walter Smith), they put in print her height, weight and measurements!  And her address! Boy, how times have changed.

Fern Peck, later McMann, was the first Miss Hollywood, sometime in the ‘20s, according to “The History of Hollywood (1920 to 1950)” by Virginia Elliott TenEick.

In the heyday of Hollywood’s beauty pageants, in 1949, Wilma Mae Tucker won the title of Miss Hollywood.

“It was quite an exciting year,” remembered Tucker, now Wilma Carvel, who will turn 90 this month.

“My sister was the one that got me involved, and the Jaycees sponsored me. And I remember that there were two gentlemen — Augie Paoli and Ralph Lawson — who were very kind, and took me to a lot of the places that I had to go to represent Hollywood.  And they were all so good to me.”

Bert Parks, the long-time host of the Miss America pageant, lived in Hollywood Lakes in the fifties and sixties. And it’s been rumored Eleanor Hansberry, head of the Hollywood Bread company, made him “sing for his supper” at a birthday party she held for him, but did he host the Miss Hollywood contest as well?  Actually, no.  We had Augie Paoli.

“He was like the Bert Parks of the Miss Hollywood Pageant,” said his son, Hollywood attorney Alan Paoli.

“He was the city attorney back then, and he was quite involved with the city and various civic organizations. And when the pageant came up he was asked to be the MC. He loved being involved in the city and the community, and that was one of the most fun things he did to give back. We still have old Super 8 movies of it.”

Wilma Carvel recalled some of the pomp and circumstance of the events.

“I remember one of the regattas, it was a big, beautiful boat parade through the canals of Fort Lauderdale.  It must have been around Christmas, the houses were all decorated and lighted up and it was just a beautiful thing to see.  A gentleman from Hollywood, I only knew him as Captain Spencer, he had a boat and he built a dolphin statue on the front of the boat so I could stand on it — I had a fear of heights but thank goodness I didn’t get dizzy or fall off or anything!  It was so beautiful.”

Part of the prize package for the winners was a scholarship at the Coronet Modeling School in Miami, where Carvel, who was also Mrs. Hollywood in 1951, went several times a week with the runner-up from her contest.  They modeled for a variety of local publications — unpaid, she reported, getting “modeling experience” — and she still has many of the magazines, some with her picture as the cover girl!  Her favorite, she said, is the April ‘51 edition of a Hollywood monthly called “The Visitor,” where she shared the front page with “a real cute little chimpanzee.”

She went on to do some local modeling after the competition.

Taking out the old photos and talking about the pageants brings back great recollections of those days past, said Carvel.

“I have a picture of me with Mr. Paoli, and one of me when I won. I was truthfully in shock, I really couldn’t believe that I won! I was ready to pass out! I look at my pictures and think back on it very often. It was a thrill, a lot of fun and I enjoyed every minute of it.”

“It’s all just a wonderful memory.”

According to an article published in the Fort Lauderdale Daily News on Saturday, June 17, 1950, a record crowd was expected that night at the Hollywood Beach Casino Pool for the Pageant, which was sponsored by the Junior Chamber.

The Pageant opened with a swimsuit competition, followed by one in evening gowns. The third portion of the evening was a talent show which included singing, dancing, modeling of clothing that the girls made themselves, and a water ballet in the famous casino pool.

In addition to all this, the show featured a comedy show, and not one but two parades of former winners. The public was then invited to attend the Coronation Ball, following the crowning of the new Miss Hollywood.  Considering that the event started, said the article, at 9 pm, those Hollywood residents were sure a bunch of late partiers!

In 2004, the Hollywood Junior Chamber (Jaycees) revived the Miss Hollywood USA Pageant, according to Hollywood Jaycees Executive Director Debra Gronvold.   After running the pageant for over 10 years, their franchisee Tel Air Interests moved on to other ventures.

Grant Gravitt agreed.  He and his parents actually ran the state competition from 1978 till 2017, bringing the Miss Hollywood pageant to the newly-reopened Diplomat Hotel in the year 2000.

“Hollywood was always the grandest preliminary pageant in the system, from Pensacola to the Keys,” he noted.  “We had several great prize packages, the girls were always very involved in the community, it was the most active title in the state. A lot of the strong girls wanted that title.  We did Miss Florida a lot here. It was a live TV pageant every year, and we were the host city. Everyone would of course root for the Hollywood girl, the winner would get a key to the city; it was a big deal in the freaky little fiefdom that is the world of pageantry.”

Gravitt, a self-described “defender of the industry”, explained that the Florida pageants were not the type of beauty pageants depicted on the reality TV shows of today.”

“I never got those type of girls, the little girls who were burned out by 12 or 13. I never liked that stereotype,”  he said. “We were at the top of the game, you had to be really top to get in.

“I was about progressive women trying to get ahead in their careers,” he continued. “The girls in our contests were normally career driven and saw this as an advantage to what they wanted to do.  I always taught my girls to get business cards and write thank you cards.”

“I still follow a lot of the kids on Facebook.  A lot of my girls turned out to be very involved and very successful.”

The Gravitt family retired the Miss Hollywood Pageant in 2000, soon after the Jaycees left.

“It was such a fun thing,” he continued. “It was wholesome, clean, and family-oriented. The community rallied, little girls wanted to be in photos with the beauty queens. Lots of the fathers, too,” he quipped.

Our cover girl this issue, Judy Kent Sessa, was one of the youngest girls to ever win the Mrs. Hollywood title.  The competition that year was sponsored by the Hollywood Beach Business Association.

“It was so much fun,”  recalled Sessa. “Hollywood didn’t really have a lot going on back then, and my family and I had a lot of friends here, so I got talked into getting into it.  And with all the clapping and carrying on, it was just a fun thing.”

At the time of the contest, in 1953, she was 20 years old and the mother of a five-month-old infant.   She went on to compete in the Mrs. Florida pageant. “I was a runner-up in the state pageant; everyone said I was just too young,” she explained. 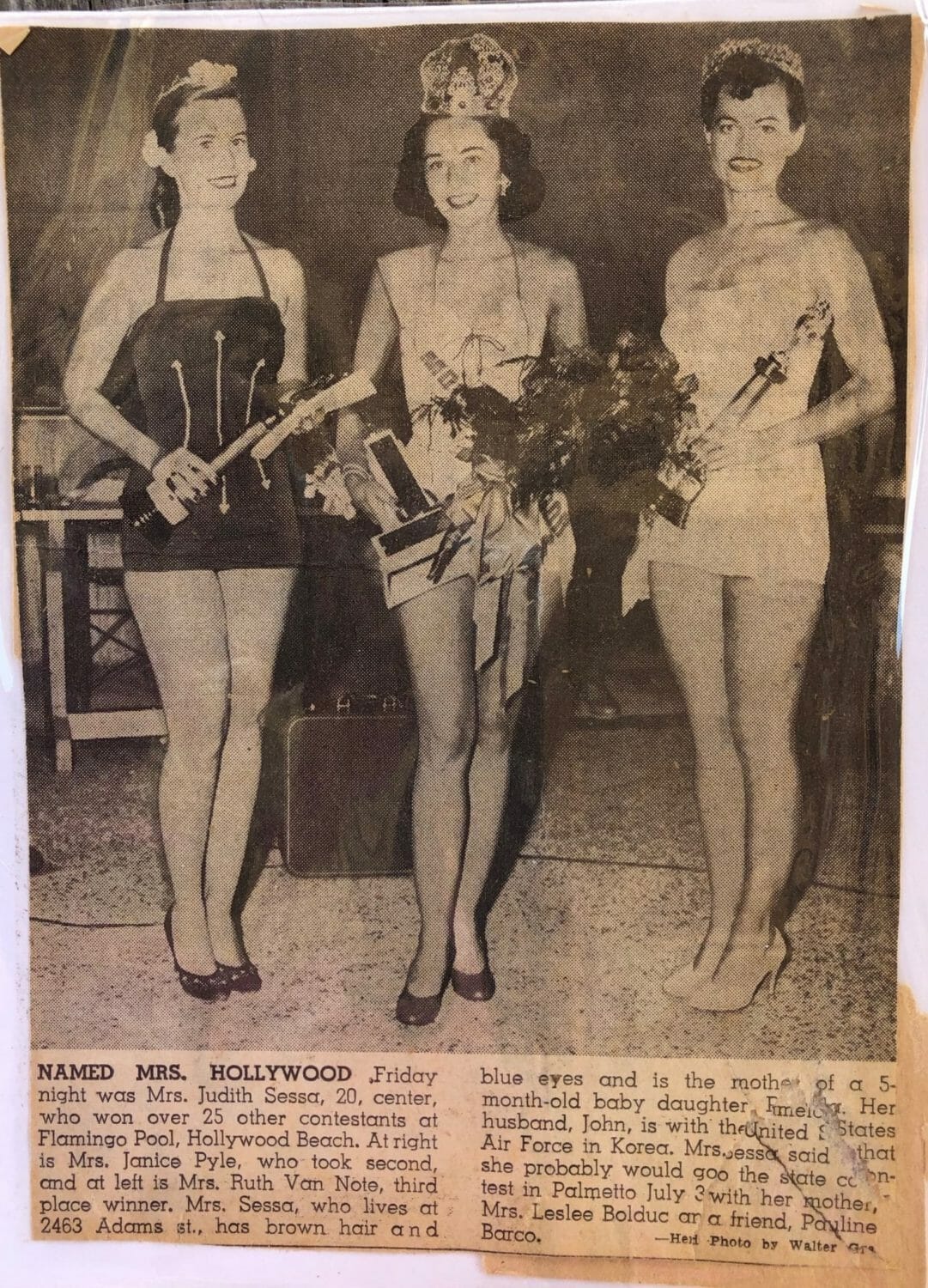 In the year that she was Mrs. Hollywood, Sessa’s husband John was defending the USA in the Korean War. Sessa competed in the pageant for only that one year.

“I ended up having five more children as soon as my husband came back, and my pageant days were over,” she laughed.

In the sunshine today on the Hollywood Broadwalk, Mrs. Hollywood 1953, who will turn 86 this July, is still quite the beauty.

“I wasn’t so beautiful then,  just attractive,” Sessa said modestly.  “And I’m holding my own at 86.  But you can’t be a beauty queen forever.”

We beg to differ.

Special thanks to Joan Mickelson and the Hollywood Historical Society for their endless help in fact-finding and fact-checking and illustrating our History articles.