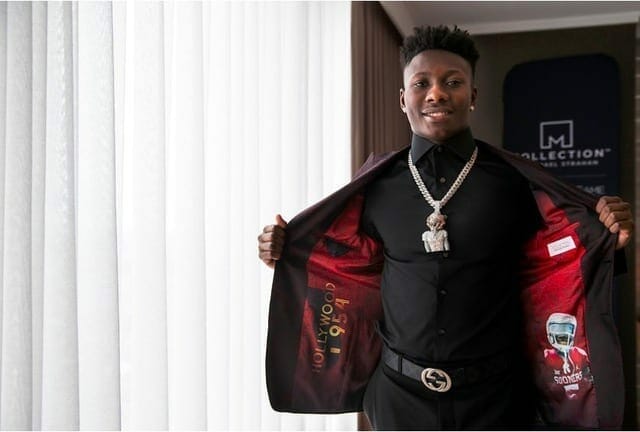 He’s not the first football player from Hollywood to get drafted into the NFL. Nor is he the first one in his family — that honor belongs to his cousin Antonio. He’s not even the first from his Hollywood High School, Chaminade-Madonna.

But Marquise Brown will be the first to carry the name of our city to the heights of fame and fortune when he debuts this season as “Hollywood” Brown, who as of last month was just the fourth wide receiver in Baltimore Ravens history to be drafted into the franchise during the first round of draft picks.

Brown never had pro football in mind when he was a student at Chaminade Madonna. A natural athlete, he played football in just about every position, while also running track and playing basketball.

“I always loved football, and especially college football,” he said in a recent telephone interview, between practices. “All I wanted was to play college football. College was what it was about for me, something I knew I could achieve it if I worked hard. This opportunity to play in the NFL was a new thing!”

“Marquise Brown is a wonderful kid. He was very humble during his time at Chaminade-Madonna and a spectacular football player on the field,’ said Dameon Jones, Football Head Coach at Chaminade-Madonna.  “We’re excited to see Marquise achieve his goals and it’s through his journey and story of unrelenting perseverance, continuous hard work, and persistent dedication, both on and off the field, that makes us proud to witness him play football at the professional level.”

Although he’s currently gaining traction as a big-time play maker on the field, Brown spent his freshman year at a junior college in California, when none of the better known football colleges offered him scholarships after high school.  Now it’s predicted that he’ll become one of the better wide receivers in the NFL.

However, per Wikipedia, “After a year at College of the Canyons, Brown received several Division 1 scholarship offers, committing to Oklahoma. During his first year at Oklahoma, Brown played all thirteen games, starting eight, and had a team high 1,095 receiving yards, becoming the 8th all time receiver in single season yards. He also posted 265 yards against Oklahoma State, an Oklahoma record for receiving yards in a single game.  On January 2, 2019, Brown announced that he would forgo his final year of eligibility to declare for the 2019 NFL Draft.”

On April 25 of this year, NFL Draft Day in Nashville, Brown was officially drafted into the Baltimore Ravens, strutting his Hollywood stuff on the Red Carpet in a custom-designed one-of-a-kind suit from the Michael Strahan COLLECTION for JCPenney (which has dressed NFL Draftees for the draft for the past five years).

His outfit featured a lining showing his nickname and hometown, “Hollywood,” the 954 area code, and his alma mater.

“It was a lot of fun, very exciting,” Brown said of the evening. “My whole family was there, and it was very emotional. I didn’t get a lot of sleep the night before.”

After the celebration, there were some meetings and conferences, a few days off, and then he went straight to training with the Ravens. Now, he reported, his days are filled with learning the plays, working with the other rookies, meeting with the coaches, learning what is expected of him, and a whole lot more.

“Football is football,” he said, “but now I get to be more professional.”

“It’s not really different, but now I will get paid!” he added.

Having been away for four years now, he said that what he misses most is the weather. However, he’s excited about “the opportunity to play with the guys I have always looked up to.

“The only way to be the best is to play against the best,” he believes.

He already started a heavy training schedule of playing pretty much all day every day.

“I don’t know what to expect, but I just know that I have to be prepared for anything,” he stated.

His advice to kids who have dreams of pro sports?

“Continue to work hard and do well in school, ’cause that’s what comes first.”