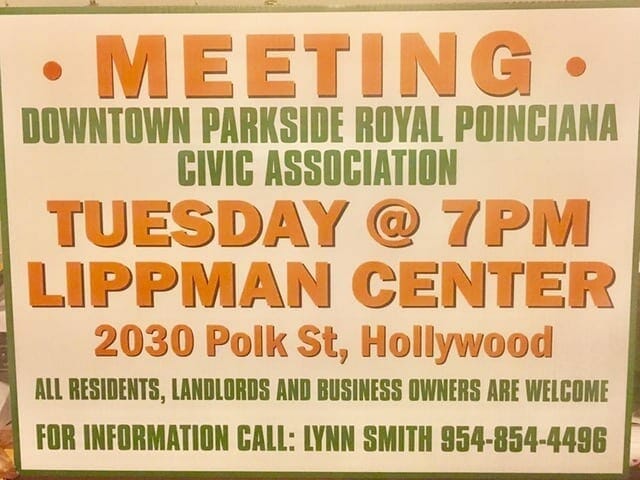 President Lynn Smith said she saw a void since the downtown area had an association for businesses, but lacked an association for residents.  Furthermore, the Parkside Association had dis-associated and while the Royal Poinciana Association existed at one time, it never gained traction.  By joining the three neighborhoods, bounded by Sheridan, US1, Pembroke Road, and 21st Avenue (Dixie Highway), the residents in the heart of the city now have an opportunity to voice matters that are important to them.

“As we’ve discussed before,” said Smith,” that’s not the way it used to be. Now I have seen a very decided difference.  Now, we really have a say. And sometimes, for so many of the big things, the city has actually been listening.“

These days, the most important issue in this community revolves around parking. 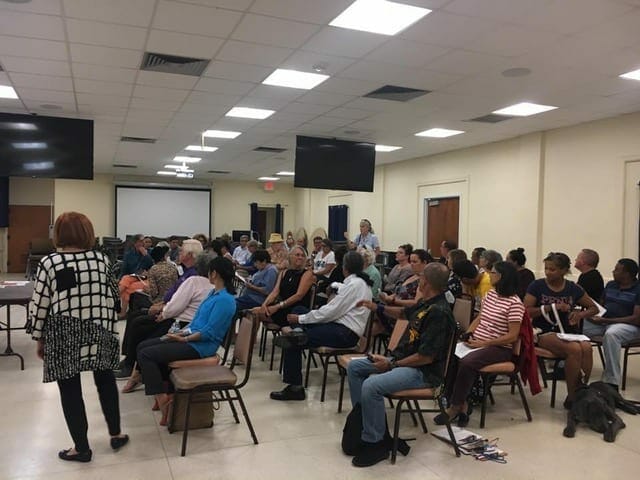 The first item on the agenda pertained to the parking of commercial vehicles in the residential neighborhoods of Downtown, Parkside, and Royal Poinciana.  Flyers of the Commercial Parking Regulations were distributed, and Hollywood Police Department’s local NTL Officer, Rolando Cabezas, fielded questions on code enforcement.  He also gave a report on local crime statistics (low), reminded everyone to lock their cars (since almost every reported auto break-in happens to unlocked cars), and gave his direct contact info to the constituents.

Next, and perhaps more pressing, was a discussion on the current RAC (Regional Activity Center) Regulatory framework for development, particularly as it pertains to parking.  The RAC allows developers to build between one and two and a half parking spaces per unit, no matter the size of the unit.  In an effort to maximize profits, many developers opt for just one parking spot to the distress of residents.

“They just approved a development on Federal and Fillmore, right behind my house, with 27 units and just one space per unit, although some of the units are two-bedroom,” noted Pierce Street homeowner Elaiser Kooser.  “There’s another building going in on Jackson Street with 200 units and only one spot per unit.

“This is an old area, built in the ‘20s, with historic houses and narrow streets, where most of the parking is already on-street, and we just don’t think they’re considering the impact.

“We understand that they’re thinking with an eye towards the future, and we’re by no means against development and progress.  But the Brightline doesn’t stop here, and even the millennials still need to have cars to get in and out. They’re going to have to park somewhere, and there will be overflow parking.  And this, combined with the increased density, is our biggest concern.”

Also on the agenda was a discussion on the homeless situation in the area.

The information that Broward County is targeting Hollywood and Pompano as the current areas of focus for rehousing local homeless seemed to ease the worries of many in attendance.

Steve Toth, a member of the Hollywood’s Historic Preservation Board, gave a short update on the board’s work and made a request for owners of historic buildings to register their homes with the board.

Finally, guest speaker Jorge Camejo, Executive Director of the Downtown and Beach CRA, gave a comprehensive presentation on the proposed Young Circle Roadway Project, the revamping of the Circle to a two-way, and a signal-free traffic circle, sparking a lively debate among the engaged citizens.

“This is really the heart of Hollywood,” said Smith of the Downtown, Parkside, and Royal Poinciana area. “It’s a big important area that had no Associations till now — that’s crazy!  I know this is a big responsibility but it’s so large and so important that it really had to be done.”

Smith spent months researching how to start a community Civic Association, researching and getting lots of support from her “mentors” Cliff Germano and Terry Cantrell, before launching in August 2018.   She is pleased with the progress so far.

“It’s really important to choose topics that the community cares about and people they want to hear from,” she said.

“Before now, when there was a problem, there was no one to complain to.  Now they have a direct line to code enforcement and the NTL and the CRA.  The Code Enforcement people and the Police Officers are just awesome. They’re responsive and active and I couldn’t be happier with all of them,” she added.

Seems the members feel the same way about Smith.

“Lynn Smith is amazing.  She’s a little fireball of a woman. She’s so passionate that I want to assist her in anything she does,” said board member Tara Aniano, who joined the Association and immediately went on the board.