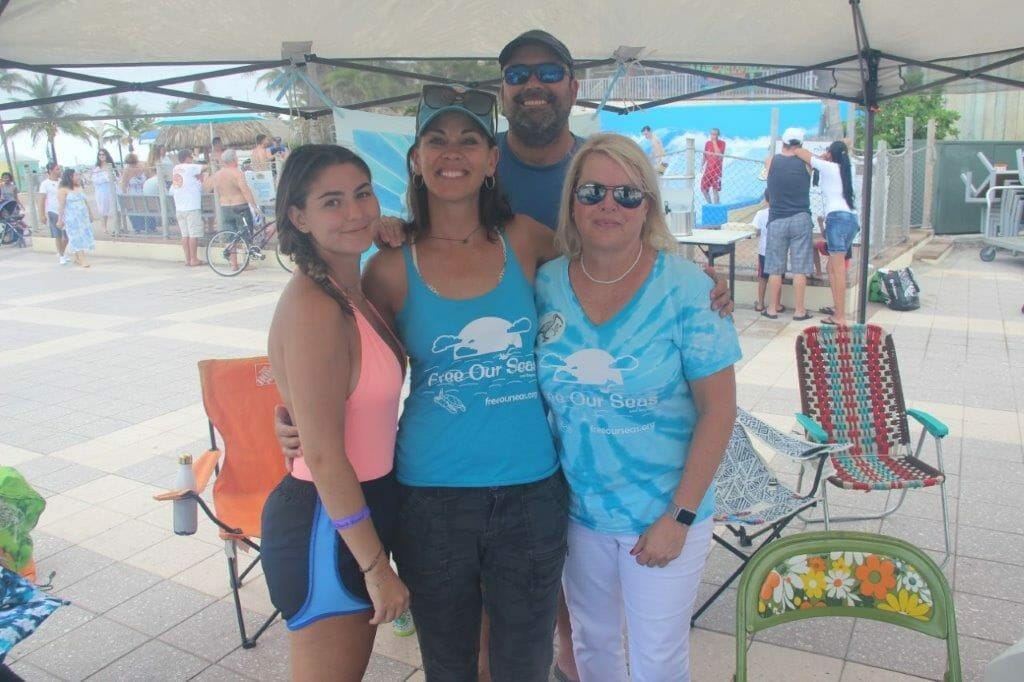 People with a concern for the environment and a saving ocean life got together at the Free Our Seas and Beyond, Environmental Art Festival around the Carpenter House on Hollywood Beach.

It began with a beach clean up activity as people worked to clean trash from the beach. This was followed by an art festival which included a large number of art and craft vendors and groups involved with preserving the environment. People could see art that had been created from trash collected at the beach. They could also enjoy lunch from food trucks. There was live musical entertainment.

Manon Wiese, executive director of Free Our Seas was pleased with the event. “This is a celebration of Earth Day. We brought the community together. We are bringing an awareness of the problem of plastic pollution in the ocean. We are using art to create environmental awareness,” she said.

Much of the artwork that people involved with Free our Seas create is made from trash collected from the ocean. Wiese said it important to see how much trash is on the beach and in the ocean. The plastic garbage is often ingested by ocean wildlife. It also takes a very long time to degrade.

Members of the South Broward High School Coral Club participated in the Festival. They were educating people on coral polyps. “We want people to know about the importance of saving the coral reefs,” said Jackie Noval, president and co-founder of the Coral Club. “We were doing educational activities to show people what coral polyps are and what coral reefs are.”

Cat Uden, a leader with Oceana also participated. She was educating people on the problems of shark finning and off shore drilling. “We want to prevent the sale of shark fins. People are cutting the fins off sharks to be used for shark fin soup and throwing the sharks back in the ocean and they can’t survive. We are also concerned about the problem of off shore drilling,” said Uden.

The Surfrider Foundation led an effort to clean the northern section of Hollywood Beach. Desiree Diclemente-Disalvo, chairwoman of the Surfrider Foundation Broward County Chapter said the group collected about 1,100 pounds of trash from the beach. “We found five bicycle frames and hundreds of plastic water bottles. We found plastic utensils and other trash. We want to protect the environment,” she said.

Alissa Alfonso, was one of the artists in the Festival. She creates art from repurposed items. “I educate people through art,” she said.