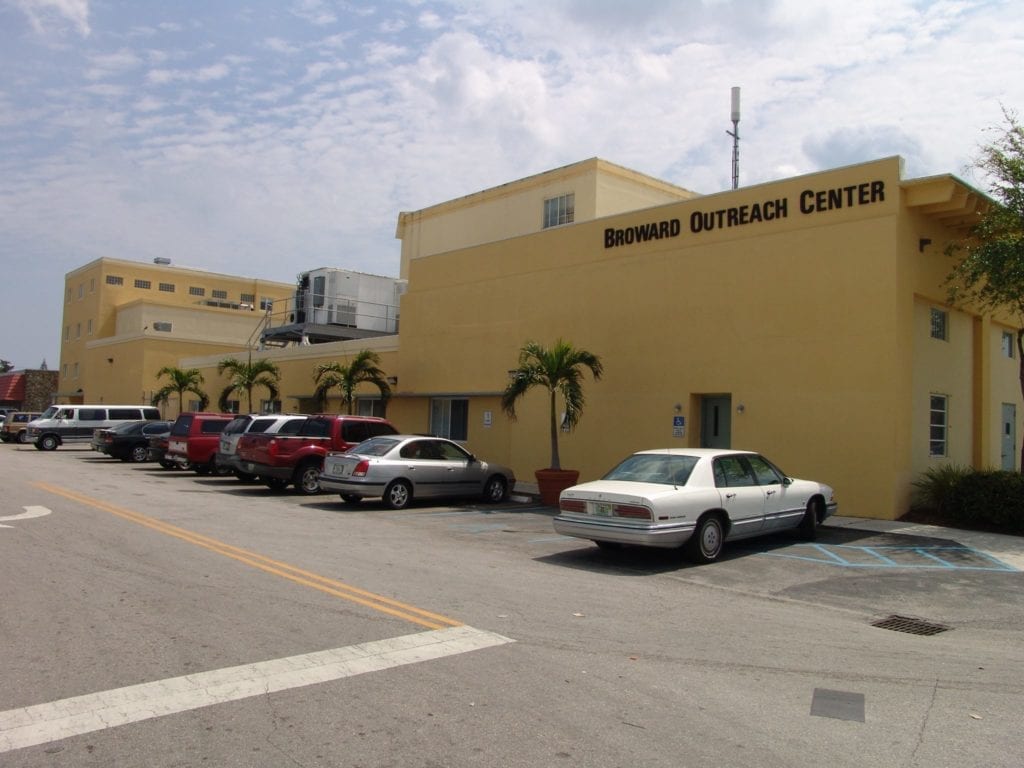 After almost 100 years of rescuing the hopeless and sheltering the homeless, there’s truly a warm, welcoming, and loving feeling that greets a visitor when they walk through the door of the Broward Outreach Center, on Dixie Highway at Scott Street.  It’s not fancy or high tech. (In fact, according to VP of Development Marilyn Brummitt, a lot of the fundraising and community contact is maintained through personal phone calls and handwritten notes!)

It must be a miraculous place for the needy, the hungry, the victims of domestic violence, and any of the more than 1,300 people that are served each day by the Center, along with its partner, the Miami Rescue Mission (MRM), together known as The Caring Place.  Since 1922, the MRM has served the homeless and needy of South Florida to fulfill its vision that no one should ever be homeless, and its mission: “to transform the lives of homeless men, women and children through comprehensive programs, to effect lasting change, and to empower them to be productive members of society.”

Through donations that mostly come from individual donors, the faith-based organization provides food, shelter, healthcare and substance abuse treatment, education, computer literacy, job training and placement, spiritual development, and housing assistance, with Christian love, compassion, and encouragement, said Brummitt. Her husband, Rev. Ronald Brummitt, is the organization’s President/CEO, and has been for 26 years.

“I’m a Florida girl, an entrepreneur, who came from the for-profit world,” said the licensed financial planner.  “I lost my first husband in 1990, and I lost my way for awhile. Then I gave my life to the Lord and said do with me what you will, but don’t expect much!”

“I met Ron when I was working at another faith-based agency helping people, married him and started working here as the volunteer coordinator 17 years ago. I thought it was a silly job — now I know that it was the best job in the mission!  I now have about 20 people on the team, and more than half my job is working with volunteers and donors.”

Brummitt says she is blessed with a vast volunteer army, over 9,000 volunteers every year, donating over 80,000 hours on a consistent annual basis.

“And it’s more than just serving food to the homeless on the holidays,” she emphasized.  “All year, every day, members of the community are here, making a difference.”

Miami Rescue Mission began in 1922 under the name “City Mission”, serving meals to the needy. The hurricane of 1926, the stock market crash of 1929, and the Great Depression caused an increased need of City Mission’s services.

In 1935, the name was changed to Miami Rescue Mission. In 1992, seeing the critical need for similar services in Broward county, then-mayor Mara Giulianti and the City Commissioners joined forces with the MRM, and began using churches, storefronts, and any  other place they could find to distribute food and clothing to Broward’s needy.

By 1997, the need for a physical shelter became obvious, and the Scott Street building was purchase by the Mission, and it officially became the Broward Outreach Center, a division of the Miami Rescue Mission, a 501 (c)(3) non-profit organization. That building now houses the men’s center and the program and development offices. In 2005, the four-story women’s and family center was built.

Helping the Helpless, Rehousing the Homeless

Today, the Caring Place operates in Miami and Broward County and also owns eleven multi-plex permanent, safe, and affordable houses to which graduate families are sometimes transitioned.  It touches up to 20,000 people each year through its residential and outreach programs.  At the heart of these programs are the core values of compassion, hope, restoration, and transformation. In reality, what it takes is passion, people, effort, love and money. Every day, Brummit and her crew supply all of the above in abundance.

“Our goal is to keep families together and get them back into the community, successful and independent,” explained Shuntel Livingston, who is a vital part of the development team, according to Brummitt.

Livingston, who has a background and degree in engineering, was introduced to the BOC when she drove a young man she met at church to the center, and saw a woman and her kids who were also residents there. Her heart was touched, she said, she visited the Caring Place website, clicked on employment opportunities and, on a whim, applied for a job.

“Before I even closed my laptop, my phone was ringing,” she laughingly recalled.  “And three years later, here I am.”

Among her many responsibilities at BOC, Livingston runs what they call the Focus Groups, including the Cover Girls mentorship programs, designed to support women transitioning to permanent housing and keeping them there, and the Home Run Team, a mentorship program for men.

The BOC reports an estimated 40 to 60 percent success rate in getting people from the shelter into permanent or supported housing.

Cover Girls was the brainchild of Nina Corbe, who recently retired from BOC after 16 years and was well-known and highly respected in the non-profit world and the Hollywood community.  “Nina also was instrumental in building our gift-in-kind program (donations of clothing, hygiene supplies and the like),” said Brummitt. “She was the receptionist in our Pompano office when I started here, and I went to her with all my questions, because she had all the answers!  I saw her potential and urged her to apply for a job in development, and the rest is history.

“She is probably the reason we’re so well known.”

Corbe has now relocated to Nevada to be closer to her family, but her contributions and programs continue.

“I’m so excited about so many women becoming a part of Cover Girls. It’s a dream come true. Come to one of our meetings and meet the Girls who are doing so much for hurting women and their children.”

“I try to help them focus on their own heart’s desires, find what are really their passions, and share them with the women,” she said.

Livingston also works with other faith-based organizations and does bed prayer patrols.

William Byrd is the Program Administrator at the Broward Outreach Center.  Byrd came to the US from Nicaragua as a child in the late 1980s, and holds a Bachelor’s degree in psychology and a Masters in human resource development.  His job is to make sure that the residents of the BOCs are following the rules and being taken care of.

“Women in the dorms,” he calls, as he opens the door to the clean and well-kept room filled with bunk-beds, where men stay when they first arrive at the center.

While approximately 85 percent of the women and children who come to the Centers are victims of domestic violence, the majority of the men are coming out of homelessness with some type of mental illness or substance abuse problem.

Men and women are kept mostly separate in the facility, and there are a host of services in house designed to help them all get healthy and back on their feet.

As the men advance through recovery and re-establishment into a more social environment, Byrd explained, they are moved to more private “transitional” accommodations.  In addition to housing, they receive free medical and mental health care, GED support, job training, and help finding work.

Leaving the men’s area, we pass through a brightly painted playground, a long-ago Leadership Hollywood project, as we enter the four-story family building.   Here, the goal is to keep families together, usually in one-room apartments with private bathrooms.  This time, the call is “male coming through!”

Byrd works closely with the Hollywood Police Department, the HPD Homeless Task Force, city, county and state caseworkers, and Broward 211, to guide people through welcome and intake, get kids into schools or daycare, and refer adults to training, jobs, and housing opportunities.

“Our job is to get them out of the shelter and into more permanent housing,” he explained.

Is BOC a typical shelter?  It’s not what this writer expected, especially in these cheery areas, recently redecorated by the Hollywood Women’s Club and employees of Lufthansa Airlines in their first American charity project.

“William has a stellar reputation at meeting, and exceeding, all the goals that Broward County gives to him,” beamed Brummitt.

Byrd said that his goal going forward is to continue expanding, to get more neighbors involved, and to gain more community recognition and support.

And support, especially financial support, is of course what keeps a place like this going.

Getting Help to Give Help

Brummitt says that probably 80 percent of Broward Outreach’s donations come from personal rather than corporate donations.

“Of course I would like to up the other;  it is something we work at,” she said. But her heart seems to lie with the people.

“When I first came on board, the vast majority of our donors were giving $100 dollars or less a year, but it was consistent. Now it’s up to 500!

“I just love to talk to our giving partners,” she continued.  “I use email, telephone, texts, personal notes and updates — different than just a regular ‘ask’.  I keep a lot of special lists, for when I know that someone wants to know more about a special topic…

“Our missions are vast.  We look out for homeless men, homeless families, at risk children — those in households with incomes of 15k or less, we want to stem that before they become homeless.

“We want to keep people informed, send them notes and reports on our programs, because when they put their money into a particular program and they see the outcome, when they know where their money is going, many will sign up as monthly givers as well.  I believe that this is the future of volunteering and giving partnerships.  Millenials want to be part of the solution, and now I see that many older people are thinking like that as well.”

While the in-kind donation programs grown by Corbe have become so successful at BOC that they are now sometimes supplying other agencies, said Brummitt, “hygiene items do not buy more beds, do not pay the electric bills.  What we need is more dollars. We need now is monthly donors.

“I want people that commit to $10 or $20 or $50 a month so I don’t have to spend as much in direct mail or fundraising, and I can communicate with them much more easily, and I know that it’s coming in on an ongoing basis.

So, about that prayer thing.   The Caring Place is a faith-based organization, clearly run by people of faith.  Does a person have to “get God” to be a part of it?

“We are faith-based in the judeo-christian ethic,” explained Brummitt. “We work with so many religious organizations, work with a lot of temples, and we honor all faiths.  We recently celebrated Passover, Easter, and Ramadan in a block party here.

“Whatever you believe, though, we’re gonna love on you.  We’re gonna teach you biblical principles, so you’re going to be exposed, and we’re going to pray that they do find God. But it’s up to the individual, and everyone makes their own choice.”

For more information on the Broward Outreach Center, to become a donor, or to volunteer, visit www.caringplace.org, or contact Brummitt at [email protected] or by phone at 305 571 2200.