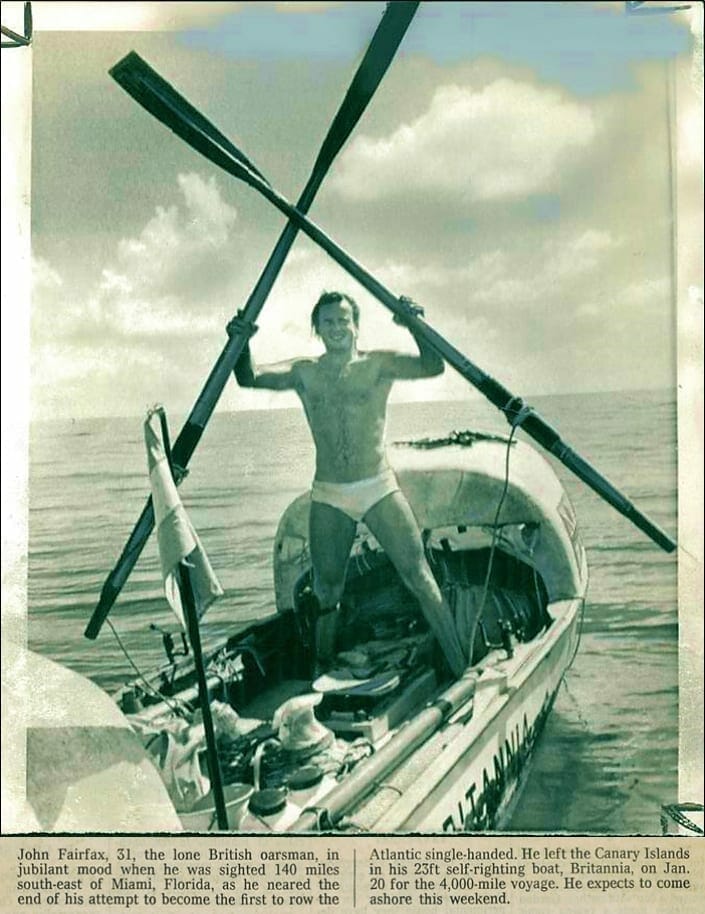 In 1969, a young Brit named John Fairfax pushed off from the Canary Islands toward Miami in a rowboat called the Brittania, determined to be the first lone oarsman in history to traverse any ocean. 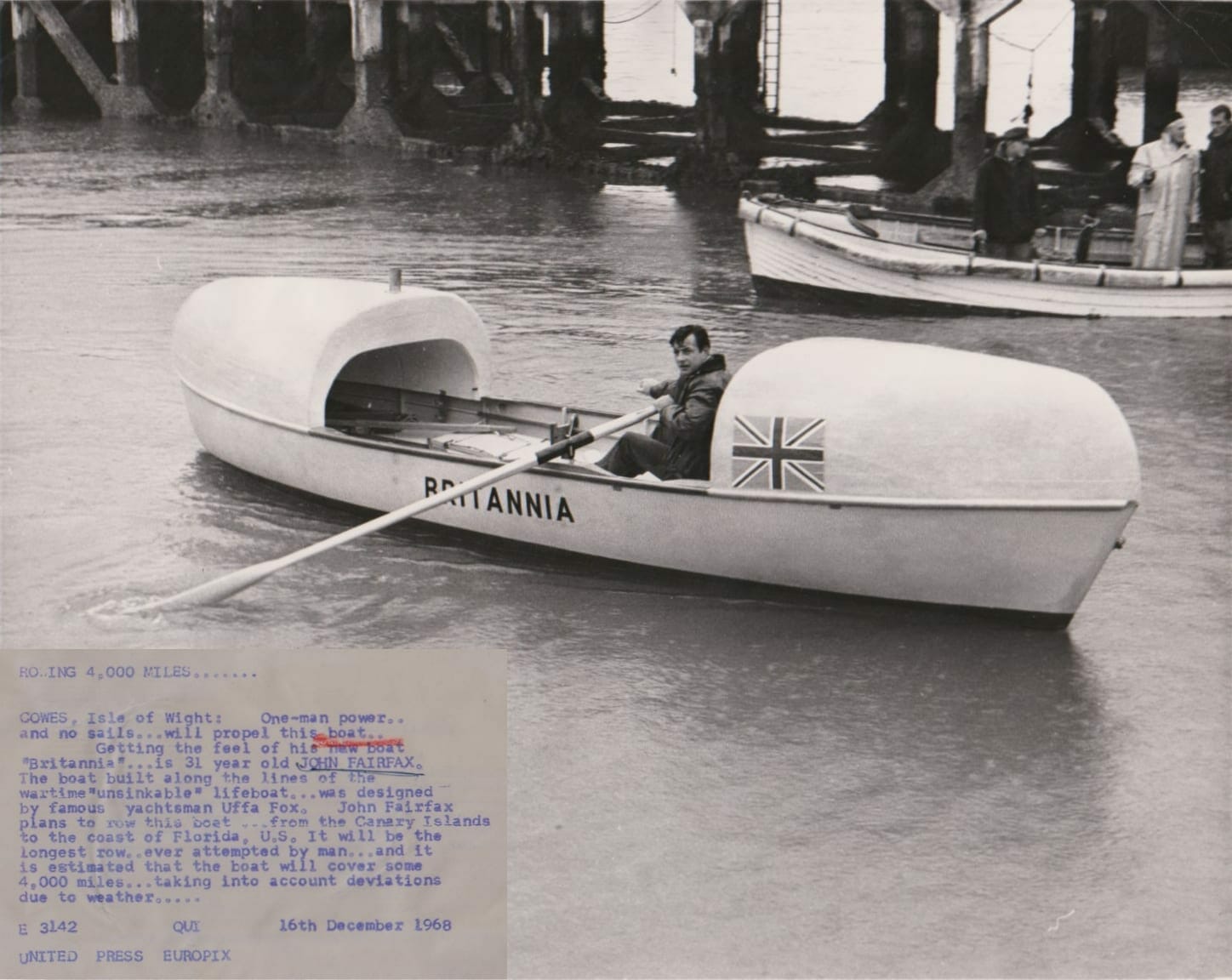 In recognition of the 50th anniversary of this great trek, the Hollywood Historical Society will host a celebratory gathering on Hollywood Beach right off of Garfield Street this July 20th, at 9 am.

On hand will be Fairfax’s widow, Tiffany Fairfax of Henderson, NV, who will receive a key to the City from Mayor Josh Levy.  The CRA will also dedicate a commemorative plaque to Fairfax at the Garfield Street Community Center, and our local lifeguards will re-enact the beach landing in row boats at the shore!

“It’s so wonderful that your community is honoring the 50th anniversary of my husband’s historic achievement, and I know he will be there with us in spirit,” said Mrs. Fairfax.

“After six months of rowing the Atlantic alone, he came ashore and was thrilled to be greeted on the beach by the good people of Hollywood!  Perhaps some of them who remember that day still live locally.  So impressed was John with this reception, that when I met him years later, after he rowed the Pacific, we married and chose to live there in Florida, where we made many friends.”

John Fairfax, who described himself as a professional adventurer, planned to celebrate once he arrived in Miami with “a nice steak, a bottle of Scotch and two aspirin.”  When he hit dry land, tanned, tired and about 20 pounds lighter than when he had left, he uttered these historic first words:

“This was bloody stupid.”

Fairfax, however, was one of only a few that considered his endeavor so unimportant. Indeed, even the astronauts of the Apollo 11 paid their respects to the lone sailor, in a telegram sent as they were preparing to make history themselves.

Wow!  Who was this crazy guy?

“He was a man of unbelievable strength and courage and confidence in everything he did,” his wife told the Associated Press. “He thought nature was a worthy challenge, and he loved nature.”

When he was six, his mother enrolled him in the Italian Boy Scouts. It was there, he said, that he acquired his love of nature and his desire to conquer it.  Fairfax, who died in 2012 at the age of 74, was born in Rome on May 21, 1937, the only child of an English father and a Bulgarian mother, according to obituaries in the New York Times and the LA Times, and excerpts from “The Oceanrowers,” by Kenneth Crutchlow and Steve Boga. 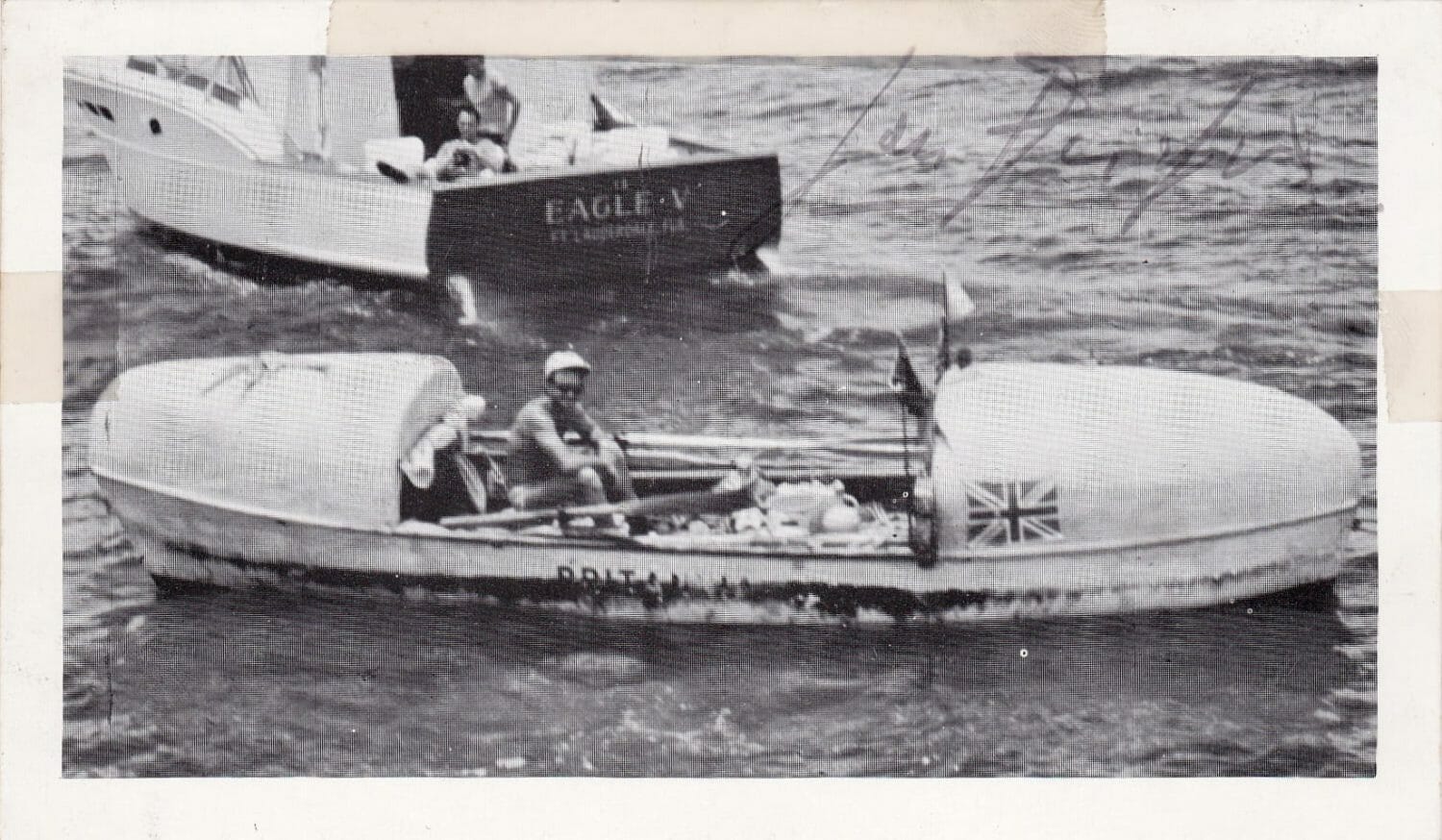 As one may have guessed, Fairfax was not an easy, well-behaved kid.  At age nine, on a camping trip, he shot the scoutmaster’s pistol into the air to end a fight.  At 13, he ran away to live in the jungle, “like Tarzan”, surviving there as a trapper with the aid of local peasants, returning to town periodically to sell the jaguar and ocelot skins he had collected.

At age 20, despondent over a failed love affair, Fairfax resolved to kill himself by letting a jaguar attack him. (He changed his mind and wisely, decided not to let the jaguar win.)

Moving with his mother to Buenos Aires, Fairfax later studied literature and philosophy. After reading an account of the voyage of Frank Samuelsen and George Harbo, Norwegians who in 1896 were the first to row across the Atlantic, he vowed that he would one day make the crossing alone.

Later on in Panama, he became a pirate’s apprentice and spent three years smuggling guns, liquor, and cigarettes around the world. He would become the captain of one of his boss’s boats, work that gave him the superb navigational skills that he would require to take on the task.

He later said he couldn’t have done it without the help of this “great teacher,” the pirate.

His pirating skills did not include rowing, however, so in 1968, he began training by treating fitness as a full-time job. He ran two miles every morning, then completed two hours of swimming and weight lifting, followed by three or four hours of rowing on the Serpentine, a small lake, five-eighths of a mile long, in London’s Hyde Park.  It was about one eight-thousandth the width of the Atlantic, but it would do.  “Rowing back and forth on the Serpentine was boring, but it gave me an inkling of what it would be like out there, with nothing but sky and water to stare at for months on end,” he said.

At the same time, he began advertising for financial support by placing a personal ad in the London Times that stated his intention to row solo across the Atlantic. Was anyone interested in helping?

One of the only six replies came from the Lynch family of Potter’s Bar, England, who offered encouragement and a check for one British pound. Fairfax, who was targeting large corporations for financing, was so touched by this gesture that he had the Lynch’s check framed.

He kept this letter among his few treasured possessions throughout his life.

Another response was from a secretary, Sylvia Cook, who said she thought rowing across the Atlantic was a truly magnificent thing to do, and that she wanted to help out in her free time.

Cook became his girlfriend and longtime companion, and two years later his sailing partner when they rowed from San Francisco to Hayman Island, Australia, becoming  the first people to ever row across the Pacific.

She was here in Hollywood to greet him when he landed on our shore on July 19, 1969.

On Jan. 20th of that year, John Fairfax pushed off from the Canary Islands, bound for Florida. His 22-foot craft, the Britannia, was described as the Rolls Royce of sailboats.  Built of mahogany, it had been created specifically for the voyage by the eminent English boat designer Uffa Fox. It was self-righting, self-bailing, and partly covered.

He packed Spam, oatmeal, brandy, water, and a radio. There was no support boat and no chase plane. He caught fish and sometimes boarded passing ships to refill food and water, and perhaps have a shower and a nap. 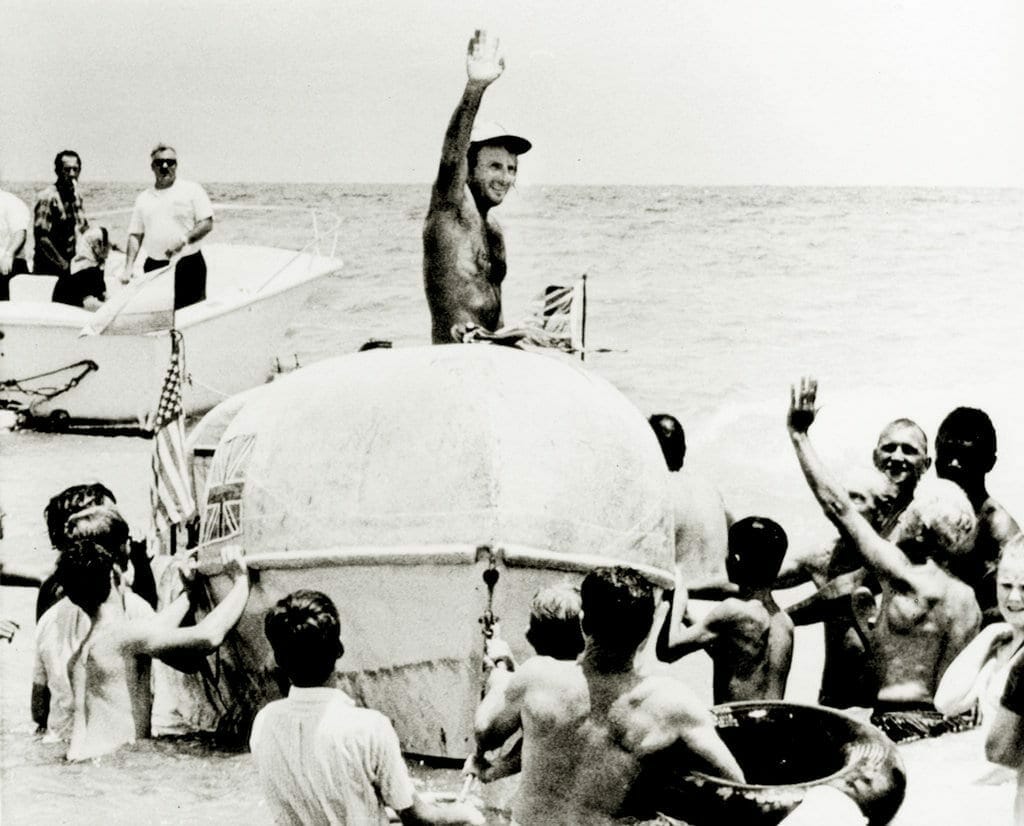 The long, empty days caused perhaps a little short term madness, he reported.  Desperate for company, he talked ardently to the planet Venus.

It was a long and lonely six months.  Miami is approximately 3,600 nautical miles from the Canaries.  But since he could not hope to row a straight course, this meant as much as five thousand miles of rowing, maybe more.

Here, though, we jump to the end:

July 6: 167th day
“A plane with a lot of photographers flew over me for about twenty minutes during the afternoon, so although I have heard no news on the radio, I guess they know by now that I’m about to arrive.”

Unfortunately, he was not about to arrive. A series of mishaps ensued. He misread his position, and then the boat that was bringing people to meet him broke down . There was an inexplicable drift that carried him forty miles south. All of this and more conspired to keep him bobbing and fuming at sea for thirteen more days.

At 1:45 P.M. local time, Britannia touched the beach, and Sylvia was in my arms, and they blew the whistle for us, and I almost cried. Hail Britannia, we have conquered, and Florida is, at last, ours.

Our reception was magnificent, and–oh, I love America, love everybody today, but mere words cannot express my feeling, and I will not try. Only one thing I can say, and this to you, my lovely little Britannia: “I salute you.” 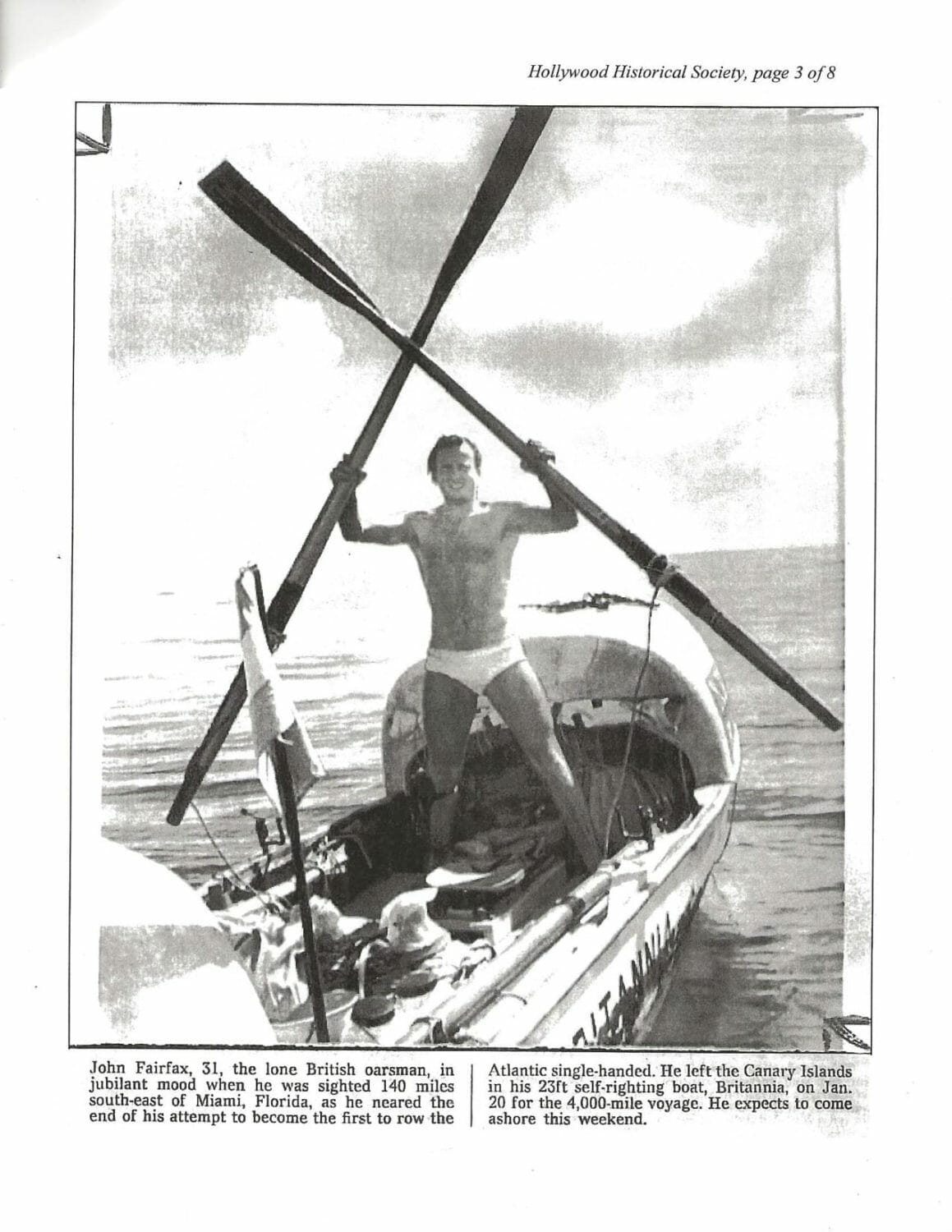 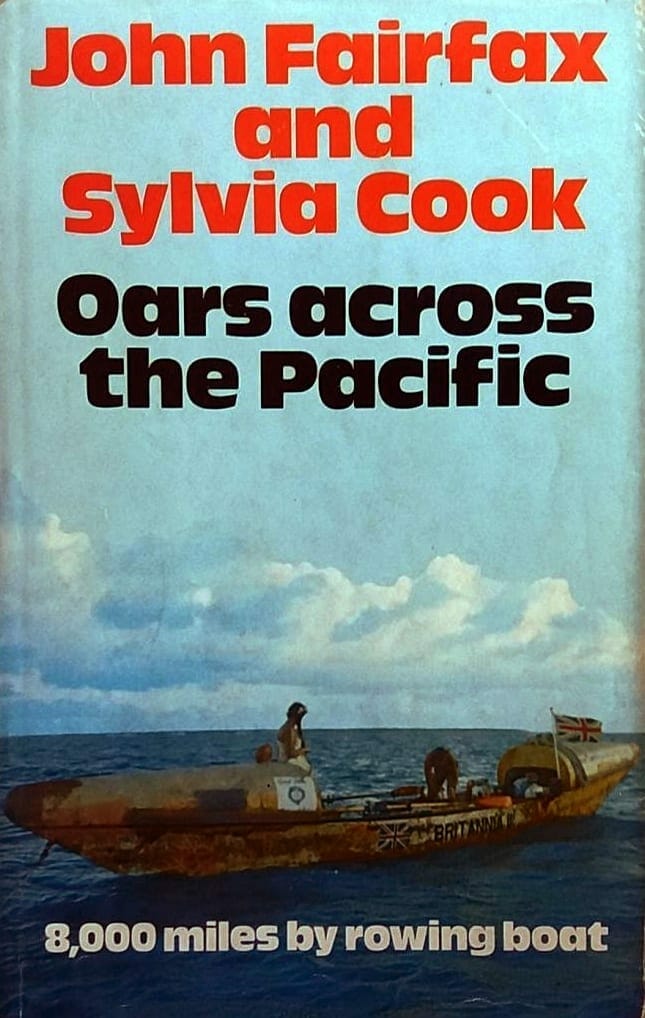 In the early 1970s, Fairfax wrote two memoirs, “Britannia: Rowing Alone Across the Atlantic” and, with Cook, “Oars Across the Pacific.” Copies of both books will be available for sale at the July 20th event at the beach.

After his second historic voyage, John Fairfax declared: “It was a miserable journey. I don’t care if I never touch another oar.” 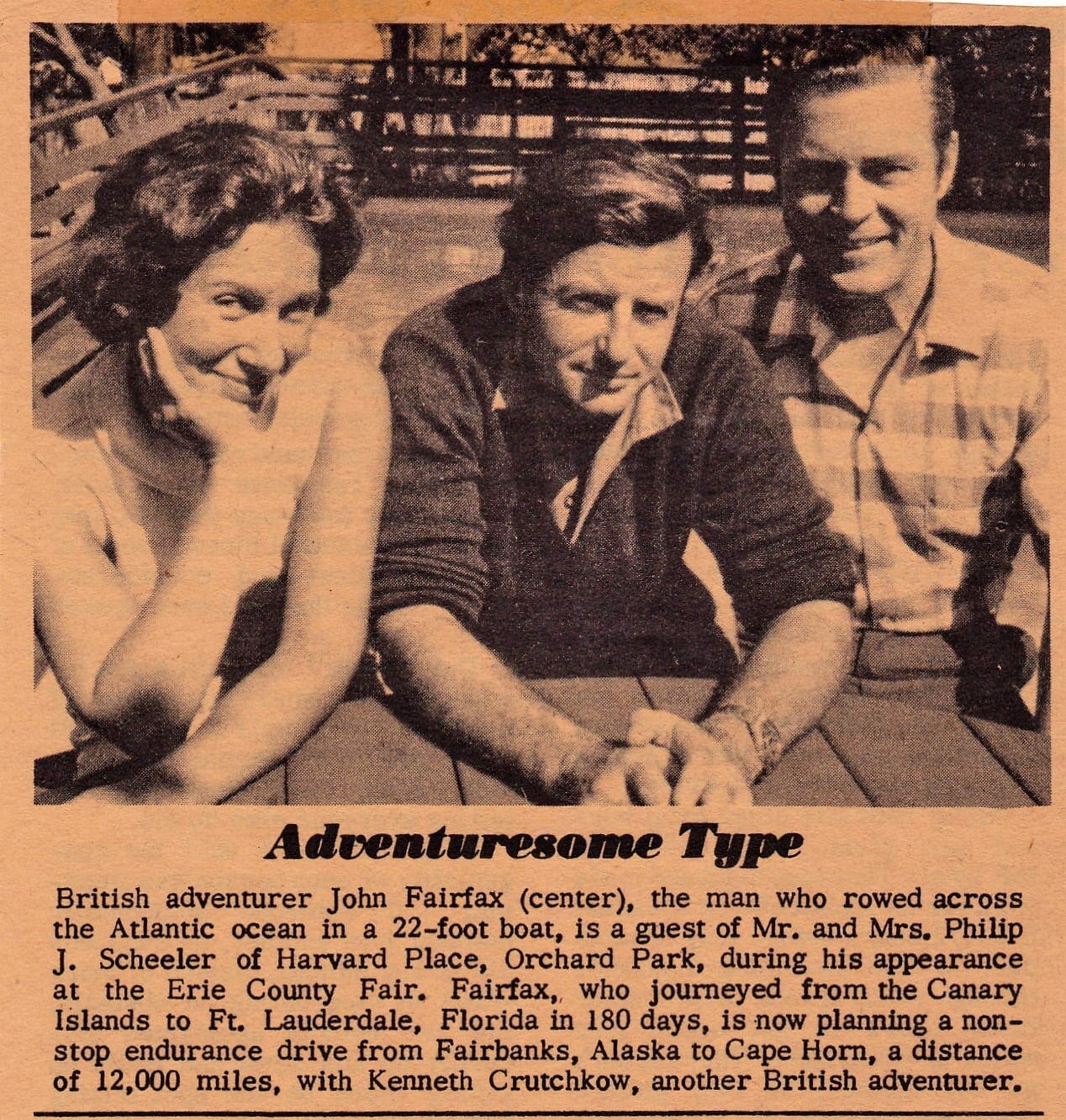 Fairfax was often asked why he chose a rowboat to cross the two roiling oceans.  “Almost anybody with a little bit of know-how can sail,” he said in a profile on the site of the Ocean Rowing Society International, which adjudicates ocean rowing records.  “I’m after a battle with nature, primitive and raw.”

For more information on the event, contact the Hollywood Historical Society at (954) 923-5590 or by email at HollywoodFLHistory@att.net. 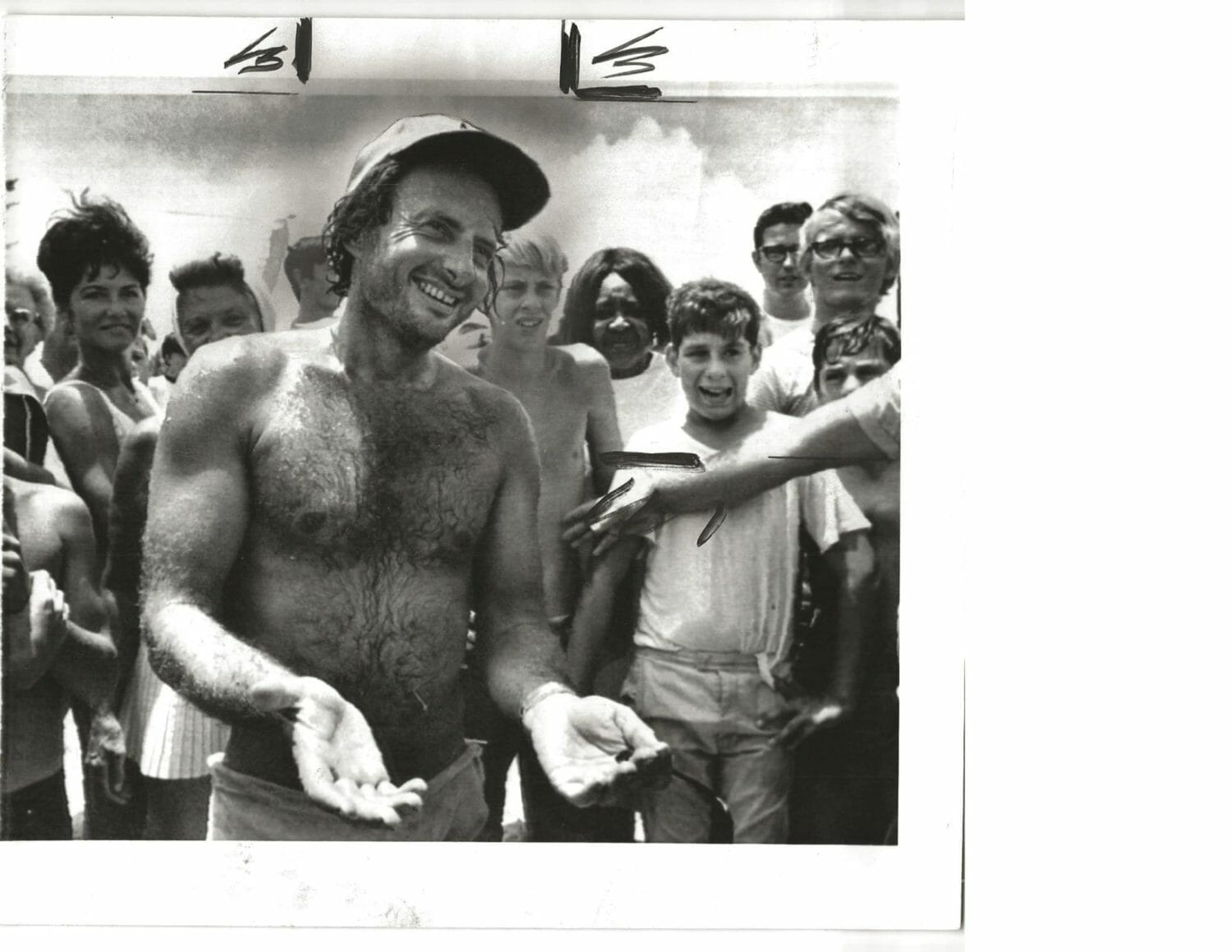