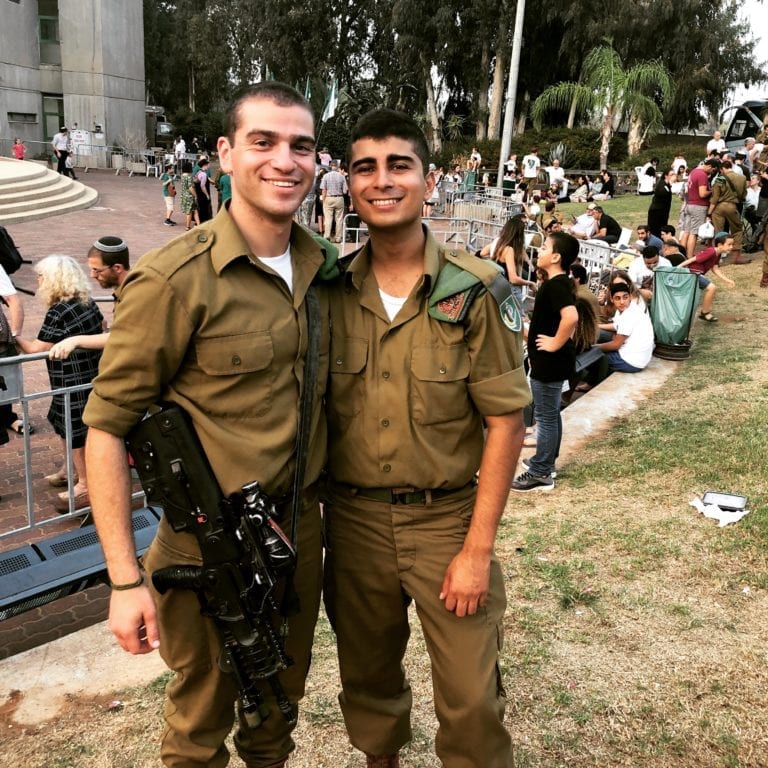 In Europe, it’s customary for kids to take a gap year (a year off between high school and college). In Israel, boys and girls alike give two years of service to the military.  However, in the US, most kids go straight from high school to college or the armed forces and from there directly into the workforce and adulthood.

Hollywood resident Leon Sultan was pretty much on the same path, graduating from high school and going on to graduate from Florida State University with a degree in psychology.

Sultan previously visited Israel with the North Miami JCC in high school, and he said that he really liked it, and felt very connected there.

“I knew that I wanted to do service for the state of Israel, and I wanted to learn Hebrew. And I wanted a break before I continued to my next step,” he said.  “A friend from high school had told me about the Lone Soldier program, so I looked into it and I decided I wanted to do it.

The Lone Soldiers of Israel

Israel’s Lone Soldiers are young men and women who leave their families and countries to serve in the Israel Defense Forces (IDF), serving in combat units in the military in one of the world’s most dangerous war zones.

It’s actually a growing national trend here in the US, with more than 800 young Americans enlisting in the IDF annually.

While most IDF soldiers are Israeli natives who can lean on the support of their loved ones nearby, Lone Soldiers generally have no immediate family in Israel to provide financial assistance, emotional support, or a warm home during this challenging period in their lives.

Enter the Friends of the Israel Defense Forces

The Friends of the Israel Defense Forces (FIDF) was established in 1981 by a group of Holocaust survivors as a not-for-profit 501(c)(3) American humanitarian organization, with the mission of offering educational, cultural, recreational, and social programs and facilities for Israel’s soldiers.

The FIDF stands by the IDF soldiers wherever they are, and is committed to supporting them during times of increased tension as well as times of stability.

The FIDF not only supports the soldiers of the IDF, but also builds deep bonds and lasting connections between communities in North America and in Israel – the homeland for all the Jewish people.  In 2018, FIDF raised over $139M for the well-being of Israeli soldiers, through more than 150,000 supporters in 20 chapters throughout the U.S. and Panama. In 2018, FIDF supported over 105,000 IDF soldiers and veterans.

“I’ve met so many of them, actually one of my daughters was one!” said FIDF Florida Executive Director Dina Ben Ari.  “Lone Soldiers come from all over the world to volunteer and enlist and serve the state of Israel. It’s not a simple program where people can go and work on a base near their homes. When an Israeli teen serves, their family is there to help out, but for the Lone Soldier, they often only have us.”

FIDF is the go-to support organization for both the Lone Soldiers and their families, noted Ben Ari. This year, they have worked with over 3,500 soldiers from more than 70 countries around the world, giving guidance and support in many ways, from flights home to holidays with host families to days at theme parks, where, when you see them without their uniforms, you realize, she said, that they’re really just kids.

“It’s not easy for them, or for the worried parents they leave behind. It’s a sacrifice and the people of Israel really appreciate that sacrifice. They don’t take it for granted that someone will come and fight for them.”

This spring, Sultan was able to come home for a few weeks to visit his family and friends, courtesy of the FIDF.  After almost two years in the Israeli army, working side by side with Israelis, Americans and fellow Lone Soldiers from all around the world, doing what he said is “routine army work,” he’s not the kid he was when he left.

Now worldly, and bilingual, he’s a dual citizen of the US and Israel, 20 pounds lighter — “in the best shape of my life,” he said,– and he’s learned that “the bar is only as high as you want it to be, and if you want to overcome anything, if you want to really take on anything, it will bear fruit.”

Sultan says he’s grateful that he hasn’t had go into combat during his time in Israel, since there hasn’t really been any conflict in the time he’s been there.

“I wouldn’t have liked to fight,” he admitted.  “I hope it never comes to that.”

And as he comes to the end of his two-year commitment, he reflected on his decision to leave his home and family to join the Lone Soldier program.

“I wanted to take an active role to serve the state of Israel,” he said. “I wanted to connect with and interact with new people and learn a new language and I did that.”

“It made me realize how capable we are as people if we put our minds to things,” he continued. “And I really just thought that I would regret it for the rest of my life if I didn’t do it.”

For more information on the FIDF or the Lone Soldiers program, visit https://www.fidf.org or contact Dina Ben Ari at dina.benari@fidf.org.