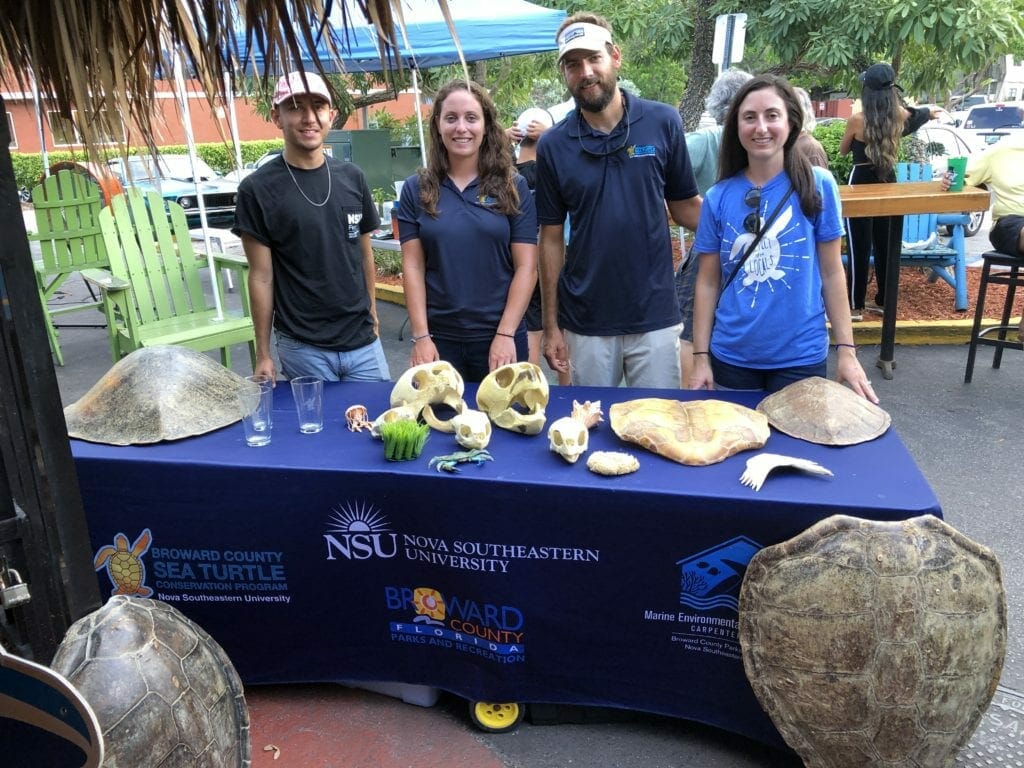 When Shenanigans East needed to spruce up the wall next to its drive-thru window, owners Patrick and Christine Utter knew that a typical painting and landscaping job would not be keeping with the spirit — or the name — of the lively and fun pub and restaurant on Federal Highway just off Sheridan.

So they called on Patrick’s old friend, Italian-born and Brooklyn-raised artist Roberto “Pasta” Pantaleo, and together they planned a weekend-long event that would support a cause that they care about while getting the job done.

Running with the theme of the ubiquitous murals seen throughout downtown Hollywood, Pasta painted the wall throughout the weekend, creating a big and beautiful undersea image of a huge loggerhead turtle surrounded by seaweed, fish, dolphins and other sea creatures swimming nearby.    Representatives of The Marine Environmental Education Center (MEEC) at Carpenter House in Hollywood Beach manned a table throughout the weekend, to educate diners about the Broward County Sea Turtle Conservation programs run there in cooperation with the Nova Southeastern University Oceanographic Center.

Pasta displayed and sold a selection of his original and signed marine art, and other pieces were raffled off, with all proceeds going to Carpenter House.  Shenanigans provided ongoing entertainment with solo guitarist Jimi Ruccolo performing live while Pasta painted.

Utter says he fell in love with the gentle giant sea turtles as a young man on a fishing trip in Bimini.

“I was dining at a small local BBQ, a little hole-in-the-wall  where we used to go to eat cracked conch and all sorts of seafood delicacies, when I heard a blood curdling scream,” he recalled.  “The Bahamian guys we used to fish with had caught a big loggerhead, and there it was, on a plywood slab, and they were butchering it for food. There, they eat them. And in that moment, I realized that they are special creatures, and they do have souls. They look strong and indestructible,  but they’re not. 50% of their nests don’t even hatch, and now they’re endangered.

Utter became involved with the turtle conservation movement when he met Derek Burkholder, the director of the MEEC program, through the Memorial Milers running club, a coach-led training group sponsored by the Memorial Regional Hospital fitness center.  There was an instant synergy.

“Many of the staff at Shenanigans share my passion for conversation,” noted Utter.  “His staff at Carpenter House embraces Shenanigans’ and my conservation mindfulness.

“I’ve been involved with the great folks from Carpenter House for awhile, and with this event, I wanted to not only provide their volunteers with a good time, but to help them raise awareness for their cause.”

Utter and Pasta have been friends for over 25 years, bonding over their love of sports, cars and the ocean. Pasta was a world-class airbrush artist, well known in South Florida since the ‘70s for airbrushing cars and boats for some of Miami’s most eccentric characters, while Utter became a chef and purveyor of fine seafood.

Both are avid fisherman, and both men became involved in professional fishing tournaments for a variety of charity causes, particularly those concerning children, sea life and ocean conservation.

“Pasta was a great area painter,” proclaimed Utter. “He airbrushed boats and all the fishermen were amazed at his skill. He has done so many countless paintings and marine drawings for charitable foundations. Pasta paints and donates pictures, artwork, ceramics, art for trophies at fishing tournaments. He’s done fish art for PAL, and for a tournament to raise funds for mentoring underprivileged kids from the Miami Dolphins organization, and more.

“And he has donated pictures and art to any marine life conservation project I’ve ever been associated with.

“He really is in a league of his own and we’re really fortunate to have him here.”

“They have a real love for the ocean and also respect for marine life.”

Unfortunately, the turtle population is a food source in other parts of the world. Their eggs, plus their flesh, is highly desired, and this has endangered the survival of some parts of the species.

“I love that South Florida is a melting pot of society, and people from many other cultures eat things that we don’t. But when others eat our sea life…well, we can’t kill everything in the ocean. When I was a lifeguard at Haulover in the ‘70s, we had sea turtles all over the place, kids would chase them around with sticks, no one knew then that they would become endangered.

“The responsibility of outdoorsman is to protect the environment, plus to only take sustainable sea life,” he believes, explaining that the fishing industry has not only strict quotas on the amount of fish that is allowed to be caught, but also the season the fish can be caught, so as not to affect reproduction, plus the size of fish harvested.

“We always have local fresh fish at Shenanigans — fresh Mahi, fresh smoked wahoo dip and summer Ahi tuna. But they are all local, sustainable fish.  Never anything that’s endangered.”

Pasta now lives and works full time in Islamorada in the Florida Keys, capturing in art the beauty of the sea.  Utter plans to build a new deck adorned with driftwood and seaweed to showcase the new mural, creating a spot where patrons can photograph themselves in front of the depiction of the beautiful sea creatures.

Fishing and diving are one of the most effective ways to make the public aware of pollution and the problem of plastic waste, Utter noted, adding that one of the biggest problems in our area waters are water treatment wastewater and the run-off that we pump back into the ocean. Garbage and sewer water are both the main culprits in killing the reefs and ecosystems, he said, and he hopes that this event will help Carpenter house spread the word.

“Shenanigans is known as a place for fishermen and conservationists,” he said, “ and this was a great opportunity to not only show marine life in an art form, but to also support the effort for conservation.”