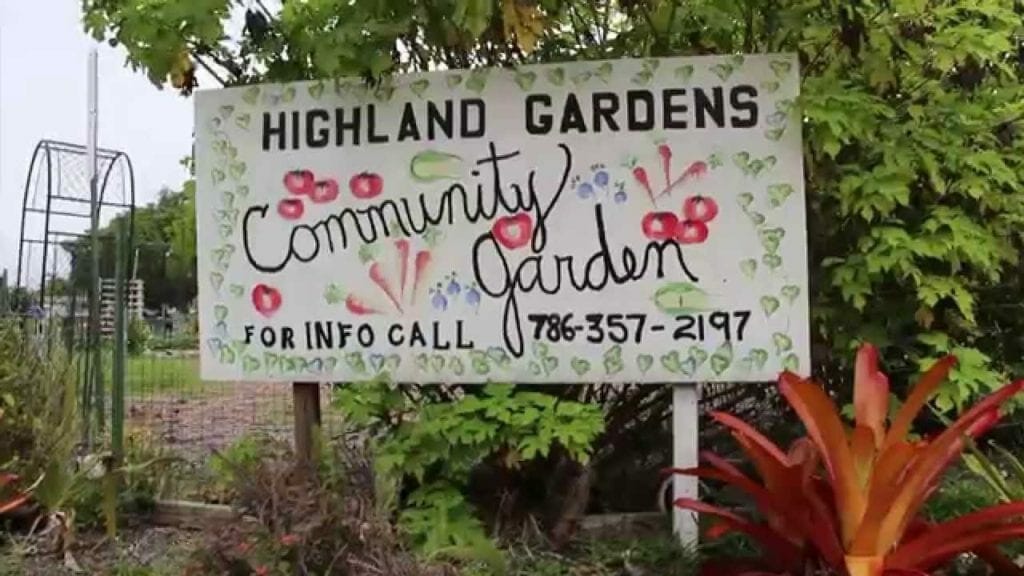 Highland Gardens is a mostly residential subdivision of Hollywood, bounded by I-95 and Dixie Highway, from Pembroke Road to Hollywood Blvd. And judging from June’s Civic Association meeting, life’s pretty good in their neck of the woods.

“There’s been a lot of turnover in real estate lately in Highland Gardens”, said attorney David L. Kout, current president of the association.  Several of the members in attendance agreed, noting that it’s partially due to the rise in AirBnB usage of homes in the area, which, they say, is both good and bad. Good for property values and curb appeal, and not so great because of the influx of strangers into the neighborhood.

Community members at the meeting, like in most south Florida communities, expressed concern over the ongoing legislative battle in Tallahassee to invalidate all local laws governing short term rentals, preferring to keep them in the individual cities.

Debates continue as of this writing.

First up at the meeting was code compliance officer Tasheema Lewis, who said there were only 63 violations in the past month in Highland Gardens, about half the usual amount, with most of them centered around property standards such as overgrown grass, painting, swale maintenance, parking, and sidewalks.  She recognized the proactive initiative that the residents have been taking, the “Beautification of Highland Gardens” and was acknowledged by Association Secretary/Treasurer, Shirley Stealey for her help in having overgrown brush cleared away from the “Welcome to Highland Gardens” monument sign on Washington Street and 24th Avenue.

What followed was a brief discussion on who is now responsible for upkeep of the sign and avoidance of regrowth of the brush, with Stealey noting that she had been told by another compliance officer that it was indeed the responsibility of the city.

“I was happy that it was cleaned up and that you can read it now; it had been neglected,” said Sealey, “Officer Lewis has always been really nice and anything I’ve asked for, she’s gotten it done.”

Officer Lewis explained that her job was not only to give out violations but to help offenders comply, often with referrals to programs that can assist when financial or other hardships exist.

Next up was Hollywood Police Department Sergeant Pablo Vanegas, west side supervisor, standing in for Neighborhood Team Leader Robert Joseph, who was out sick. Sergeant Vanegas recalled that he was actually the NTL for the community 24 years ago!

Sergeant Vanegas’s report was pretty much the same as what we’ve been hearing in other civic association meetings around the cities: petty crimes, kids with time on their hands, auto break-ins, almost exclusively on unlocked vehicles.

“It’s easier for them, there’s less noise,” he noted. He advised residents to lock their cars, keep outdoor lights and alarms on, and keep valuables out of cars, or at least out of sight.  Among the most burgled items, he reported, were loose changes, eyeglasses and sunglasses and, surprisingly, dentures!

The next and most lengthy presentation didn’t even have to do with the immediate area of Highland Gardens.  It was delivered by representatives of PPG Development, who are gauging community interest in the revamping of the Emerald Hills Golf Course into a private, country club-style golf resort.

The redeveloped club, which would also include new rental apartments to be owned and managed by PPG, would feature a Jack Nicklaus designed 170-acre golf course, the longest in the state of Florida, a state-of-the-art gym, tennis courts, pools, catering hall and club house, and would offer deep discounts on memberships for Hollywood residents.

District Commissioner Peter Hernandez was next up to the podium. He reported that construction on Hollywood Boulevard was to be completed by the end of the year, and fielded questions about the conversion of Stratford’s Bar to a medical marijuana dispensary, speeding cars and speed bumps, sidewalk restoration, which has already begun in the area, and some proposed uses for the General Obligation Bond money.

Association members Alice Cooper and Jackie Grant came to the front of the room to discuss what they’ve been learning at the city-funded Mission Possible “Train Hard or Go Home” Boot Camp Workshop Series; Secretary Stealey gave a Treasury report and a call for membership support — a steal at $1 per month — and the group dissolved into individual conversations about a few issues affecting the area.

“Right now, there are three areas of concern that we would like the city to address,” said Maria Jackson, a 20-year resident, volunteer, community activist, realtor, and mother of four kids raised in the neighborhood.

“First, there are a few long-neglected projects, like the sign which has finally had the brush cleared away but has not been re-landscaped or repainted and the boundary wall on Fletcher Street from 22nd to 25th Avenues, which crumbled after Hurricane Irma.  It took 18 months for the city to pick up the up the rubble, now it’s boarded up but it hasn’t been rebuilt and it looks horrible, and it’s the buffer between the commercial and the residential areas.

“I’ve met with real estate clients who are investing in this city now, and they said it looks like the hood when you come in off I-95, and that is one of the main entries into our city. The city government needs to do something about it, because that brings down the impression of our whole city as well as our neighborhood. We need to take care of our boundaries.”

“Finally,” she said, “we have a serious lack of public space in Highland Gardens.  We have no real park and no real community center.”

But the biggest shame, everyone agreed, is the loss of the Community Garden. For 10 years, Highland Gardens had one on 24th and Adams, and it was recognized by the City of Hollywood, the Florida Gardening Association, The Community Foundation of Broward, The National Wildlife Federation as a Certified Wildlife Habitat, by Michelle Obama as a successful community garden and by HUD as good use of a HUD property in a low-to-moderate income area.

The resident gardeners always knew that it was temporary and last year, the plot was taken back by the city to make way for the senior affordable housing development to be known as Pinnacle at Peacefield.

“Our community is very diverse and we have a large gardening movement here,” said Jackson. A new garden has been opened at 56th avenue, but, sadly, it is too far for many of the residents to use.

“But the area remains a beautiful place to live,” she continued. “We have so many great neighbors, a healthy lifestyle; we have community.”

“We have National Night Out, an annual Holiday party, weekly Free Community Cafe every Tuesday at McNicol, monthly meetings including food and fellowship. We have affordable housing, lots of old fruit trees, and many older residents who add support and stability to the neighborhood.”

“We so enjoy living here; I’ve been here for 20 years. It’s close to everything, uber-affordable, not stressful, but those are the things that I think could make it even better.”