Hollywood Historical Society — Keeper of the Tales of All Old Hollywood 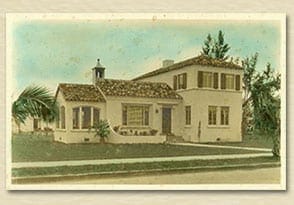 At 1520 Polk Street, across from the historic Hollywood Beach Golf Course, sits another of Hollywood’s historic treasures:  it’s the Hammerstein House & Research Center, the former home of Clarence P. “Hamm” and Vera Hammerstein, who dwelled in the beautiful home from the 1930s until Clarence’s death in 1986, when he left it to the city of Hollywood to become the home of the Hollywood Historical Society.

Actually, according to Hollywood attorney Victor deBianchi, Hamm made this arrangement while he was still alive, allowing the Historical Society (HHS) to hold meetings and begin collecting Hollywood photos and documents in the Al Vessella Assembly Room, a former garage on the back of the property, while he lived out the rest of his life in the main house rent-free.

Since then, the city has honored this agreement, leasing the entire property to the HHS for $1 a year. In exchange, the HHS, a completely member-supported 501(c)(3) non-profit cultural and educational organization, keeps it pretty much as it was when Hamm and Vera lived there, welcomes vistors for tours throughout the year, and is the keeper of the memories and the history of our city, and the go-to resource for information on all things in Hollywood’s past.

“As a law clerk and associate of Ellis Spencer and Butler, the second oldest law firm in the city of Hollywood, in the ‘70s,” said DeBianchi, “I was very honored and lucky to be given the task to work with the Hollywood Historical Society.  Clarence Hammerstein was also a client of the company, and I became his guardian and personal representative. When he died at 92, the house became the property of the city and the Hollywood Historical Society.”

DeBianchi then revealed a “well-known secret” among Hollywood old-timers:

“The Hammersteins, though well-to-do, were also both kleptomanics, and were banned from many Hollywood restaurants!  After Hamm’s death, while cleaning out the house, we found tons of old silverware, dinnerware, napkins, and all kinds of stuff from various Hollywood restaurants and clubs.

“A lot of people will laugh when they read that,” he chuckled.

DeBianchi remains on the board of the HHS and is still considered the pro bono attorney.  He has also served as secretary of the now-defunct Broward County Historical Board.

What does the Historical Society do?

The HSS is the collector, preserver and sharer of all history and memorabilia of Hollywood, said Karen Albertson, president. According to the official mission statement, its goal is also to educate and encourage public awareness of Hollywood’s heritage, and to pass on an enduring community to succeeding generations.

The society now owns over 25,000 Hollywood historical items, mostly held in the Assembly Room, which serves as its office and archive.  There, a small band of volunteers ongoingly catalog, organize, archive and update their database of everything that has been, and continues to be, collected.

“Let me take you through it,” said Dr. Joan Mickelson, PhD, historian, volunteer archivist and frequent lecturer and researcher for the HSS.  She indicates the first of many file cabinets lining the walls.

“These are sorted by category.  Next, those are the people, and then those are the buildings. Over there, we have a group of oral histories taken from 26 people back in 1976, by a reporter from the Miami Herald.

“Over there,” she continued, “that cabinet is the Sun-Tattler morgue, all articles cut and filed alphabetically.  And we have fire department logs, those were being thrown out.”

“Did you see our Hollywood Sun-Tattlers?” interjected Patti Clempson, the HHS In-House Historian.   “They were about to throw them away too. We have every issue they ever printed, bound in hardcover, and they were on the way out, and Pat Smith got them.”

Long-time Hollywood resident Patricia M. Smith was one of the first members and the second president of the HHS, and many people credit her unstinting efforts for the success of the original collection. She collected, organized, and cataloged items since the beginning, in 1974.

“She did it all,” Mickelson said.  “That’s why we call her the Curator Emeritus.”

“We started with three or four ladies, we had a suitcase with some things that some people had donated and that was the beginning of the collection,” recalled Smith.  “And then some of us started getting together and having meetings, then we got Hammerstein House for our meeting place, and we started collecting stuff and people gave us all kinds of things and we started putting it all together and we had a Historical Society!

The Life of a Donation

When an item is donated to the Society, the donor fills out a form with all the information that they have about it, and confirming that they have the right to donate it.

The archivists then enter the information into the archiving program, scan in the photos, and cross-reference all the data by name, location, description and keywords. In between new items, they work on things already in house.

When the Hollywood Gazette does its Hollywood History stories, it often goes to the Hollywood Historical Society for information or fact checks.  Usually, our writer or editor sends a note with a quick question, and Dr. Mickelson sends a quick answer, and the editor proceeds with the story. Then, a day or two later, comes a beautiful, detailed answer that usually causes the editor to go back to the computer and update whatever has already been written.

Here we would like to pay homage to the unsung heroes of the HHS, the research team.

At the heart of the team are volunteer researchers and cataloguers Lesley Lee Yuen and Mary Beth Busutil, often aided by board members Marion Fording and Jean Morford. These women give tirelessly of their time, digging through the society’s multiple resources to get to the facts.

First, they go to their database of accessioned items, searchable by names, topics, keywords, and more. Then they search the newspapers:  Hollywood Sun-Tattlers, which ran from 1943 to 1995; Hollywood Reporters, the magazine which Joseph Young published from 1922 to 1924; and the Hollywood Herald, which was published in the mid ‘30s.  Next, they go to the Florida Historic Site Files, which catalog primarily buildings from the 1920s and 1930s, the Sun-Tattler morgue, which are clippings filed alphabetically; and city directories.

Next they check every book written about Hollywood, which they have in house, and of course, the multiple file cabinets.  In a day or two, comes that beautiful detailed answer.

Every non-profit has a wish list.  What’s on the top of the list for the Hollywood Historical Society?

“A new place,” echoed all the board members, the researchers, the fundraisers, the historians.

More space, they explained, would allow them to collect and display more things, have more lectures, more exhibitions.  Space for more people, more desks and more computers to speed up the archiving, said the head archivist.

Meanwhile, the HHS continues running tours of the house where Hamm and Vera lived (and collected their silverware and napkins from all the local eateries), and traveling exhibitions.

It continues its series of fascinating lectures throughout the year, held at other sites around town, and partnering with other Hollywood non-profits for fun and interesting events.

Founding member Patricia Smith would love to hear from her old friends at 865 315 4274.