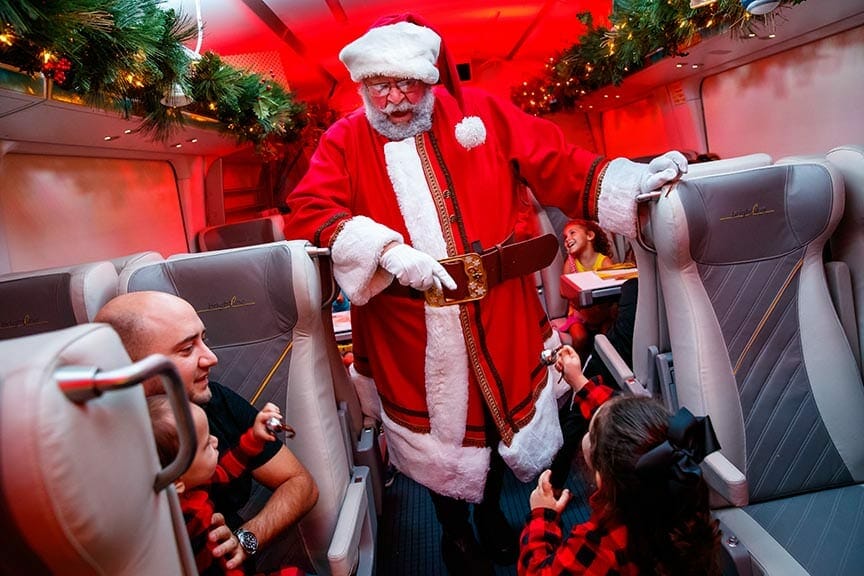 It’s officially Christmas in July! Brightline, soon to be Virgin Trains, and Rail Events Productions, is announcing that tickets to the THE POLAR EXPRESS™ Train Ride are now on sale. Based on popular demand, Brightline has opened a second departure location to the North Pole from South Florida with train offerings from Virgin MiamiCentral in Downtown Miami on select weekdays beginning Nov. 19.

Departures from the Fort Lauderdale Brightline Station will return weekends and select holiday dates beginning Nov. 16. Tickets are on sale now and available at www.miamithepolarexpressride.com and www.ftlthepolarexpresride.com. Guests are encouraged to book early as popular dates and times will sell out.

In partnership with Warner Bros. Consumer Products, the magical story comes to life when the train departs South Florida for a round-trip journey led by a cast of professional actors.

Set to the sounds of the motion picture soundtrack, passengers will relive the magic of the classic story as they are whisked away on THE POLAR EXPRESS™ for a magical one-hour trip to meet Santa.

Once on board, car hosts will work their way through the coach and punch golden tickets before hot chocolate and a delicious cookie are served by dancing chefs.

Passengers then read along with the classic children’s book, The Polar Express, by Chris Van Allsburg. Santa and his helpers board the train to greet passengers and each guest is given the first gift of Christmas.

During the trip, characters on each car lead fantastic on-board entertainment – just like in the film! Each guest will take home a keepsake sleigh bell and souvenir golden ticket in addition to the wonderful memories made on this magical trip. Families are encouraged to wear their pajamas for the ride.

Ticket prices range from $50 to $75, depending on the date, time, and location.

Launched in 2018, Virgin Trains is backed by Fortress Investment Group LLC and it is the only privately owned and operated intercity passenger rail service in the United States. Providing fast, efficient, hospitality driven transportation featuring the latest in customer-friendly amenities, Virgin Trains currently operates in Florida between Miami, Fort Lauderdale and West Palm Beach, with plans to expand into Orlando and Tampa. The Company recently announced that it will construct and operate a new express service connecting Las Vegas and Southern California.

About THE POLAR EXPRESS™ Train Ride

About THE POLAR EXPRESS Book

THE POLAR EXPRESS film is based on Chris Van Allsburg’s classic Christmas picture book, which tells the story of a boy who takes a magical Christmas Eve train ride to the North Pole to receive a special gift from Santa. First published by the Houghton Mifflin Company in 1985, The Polar Express became an instant family favorite and has sold more than 12 million copies worldwide. In 1986 it won the prestigious Caldecott Medal for Illustration.

Warner Bros. Consumer Products (WBCP), a Warner Bros. Entertainment Company, extends the Studio’s powerful portfolio of entertainment brands and franchises into the lives of fans around the world. WBCP partners with best-in-class licensees globally on an award-winning range of toys, fashion, home décor, and publishing inspired by franchises and properties such as DC, the Wizarding World, Looney Tunes, and Hanna-Barbera.

The division’s successful global themed entertainment business includes groundbreaking experiences such as The Wizarding World of Harry Potter and Warner Bros. World Abu Dhabi. With innovative global licensing and merchandising programs, retail initiatives, promotional partnerships and themed experiences, WBCP is one of the leading licensing and retail merchandising organizations in the world.