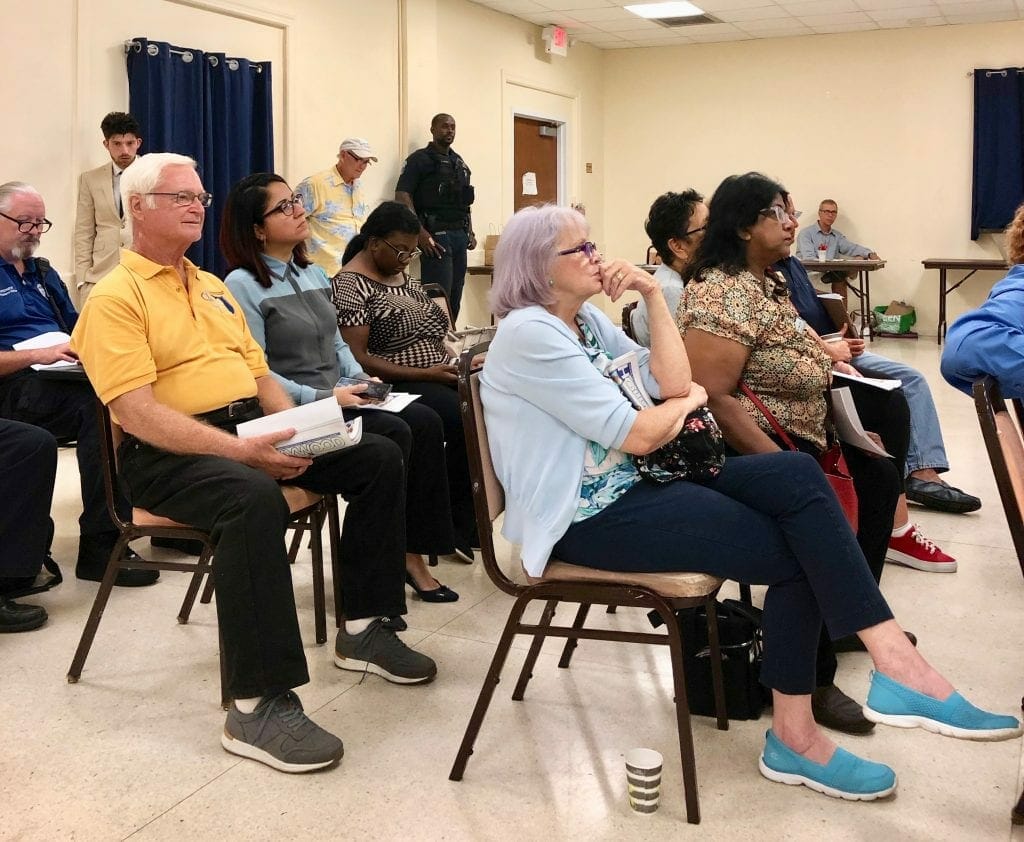 In addition to his post at North Central, Germano served as president of the Hollywood Council of Civic Associations. He served on the city’s Planning and Development Board, the Community Development board, the Marine board, and many other organizations. He was an active voice in the community and contributed wholeheartedly to the city and its people. His contributions will be greatly missed.

North Central’s July meeting was also the debut of new association president, Patricia Antircan. No newbie to the association or leadership, Antircan is the acting treasurer, vice president, and interim president of the Council.

Though Germano is a tough act to follow, Antrican had this to say:

“I’m not going to try to follow him,” exclaimed Antrican, grinning.  “I’m gonna do it my way. It’s, you know, girl power!”

And with that statement, she took her place at the podium and called the July meeting to order.

The North Central Hollywood Civic Association spans the area from Hollywood Boulevard to Sheridan Street and from I-95 to Dixie Highway/21st Avenue. The vast area means the association has not one, but two city Commissioners, Peter Hernandez and Traci Collari. While Hernandez was in attendance at the meeting, Collari was out of town. Special guests also included Commissioner Kevin Beiderman and President of the Park East Civic Association, Tom Lander.

“Everyone is welcome,” said Antrican.  “We are one city.”

So, what was on the agenda at the North Central Hollywood Civic Association meeting this month?

First up was Hollywood Police Department NTL for the area, Officer Joe Archer. Burglaries are up a little, he noted, with eight this month, most of them due to unlocked vehicles.  Some attendees stated that they think it’s better than having their windshield broken, but the officer suggested that perhaps not leaving valuables in the car would be even better.

Officer Archer then discussed a new scam in the area. He explained that thieves are wearing reflective construction vests, knocking on doors while pretending to be at work, and then breaking into homes when no one answers.  He reported that the HPD responded with additional patrol and surveillance vehicles and reminded people to be extra vigilant and call when they see anything suspicious. He also made himself available for questions and discussion during the meeting.

Next was Code Compliance Officer “and neighbor,” he emphasized, Irish Gardner. Gardner explained that the bulk of violations given out were for overgrown grass and weeds, repairs being done without permits, and unmet “property standards” (when community members do not keep their homes well painted and well attended).  “July is a great time to paint,” he noted, adding that he too, would be happy to take any questions.

Antrican then went through the written meeting agenda.  Highlights included:

“We are still fighting and the city is listening,” added Antrican. “We must stay in touch and work together. We are not anti-development.  We want to have a vibrant, moving city, but we have to be careful.”

A long discussion on the new electric shuttle followed before a short chat on the neighborhood Butterfly Garden, a small patch on 26th Avenue between Arthur and Cleveland and a must-see when visiting the area, ensued.

Following was more talk about financing and grant programs for LMI areas and notes regarding sidewalk construction around the city, which Commissioner Hernandez said were partially being funded by money from FDOT.

And then there was what the group called the “scary 3P Projects,” or the Public/Private Partnerships being considered for the Armory and Dowdy Field, the possibility of a train station at the Lippman Center location, and the Orangebrook Golf course.

President Antrican said she was hopeful that everyone could work together to make the city even better.

Guest Don Weimer gave a comprehensive presentation about the newly-revamped Downtown Hollywood Business Association and Commissioner Hernandez wrapped up the evening with his presentation that mostly focused on, you guessed it, parking.

Hernandez and many of the attendees discussed ideas to deal with the problem, and he urged the residents to be proactive.

“We have been working for a few years towards bringing solutions to these problems, but the city moves slowly,” he admitted.

He told the residents of the area that they needed to show up at commission meetings, be vocal, and be persistent.

“We are all here because we all want to be here,” she added.

Under the previous presidency, this particular Civic Association was known to be vocal.

“We were a very vocal group,” Antrican admitted. “We used to be a little rowdy, but we’ve pulled back; we need the civility.  Out there in the world these days it’s a little too rowdy, here we need to be friends and neighbors and all work together.”