The Real Mobsters of Old Hollywood 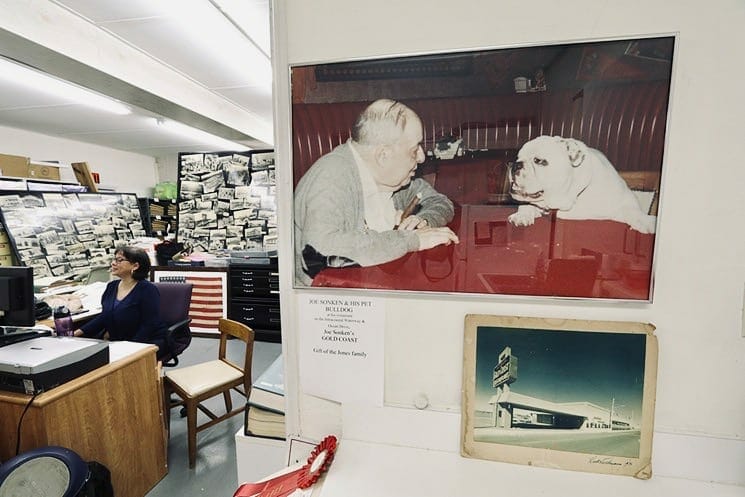 If Al Capone was actually in as many places in old South Florida as the legends say — and for as many years — he would have slept in more places than George Washington!

Nope, sorry.  Capone was actually not Hollywood’s favorite hoodlum, after all.  His biggest claim to fame here, according to Dr. Joan Mickelson, local historian and volunteer archivist for the Hollywood Historical Society, is that in 1929, the city of Hollywood, which was having a hard time financially, leased the Hollywood Beach Golf and Country Club to his people.  It didn’t last long, since patronage was limited to the group’s invited guests, and the city rescinded the lease in 1931.

“We had an ocean right here, after all,” she pointed out.

But it was the time of Prohibition, said Dr. Mickelson, and rum-running was rampant all over South Florida.

And it was all about the drinking.  Everybody wanted it, everybody did it, she said, and you could get it anywhere.

“My mother said that back in her flapper days, she’d go to Italian restaurants and drink red wine out of coffee cups,” Dr. Mickelson laughed. “Prohibition was totally ignored by the population.”

But alcohol was big business for the mob, and when Prohibition ended in 1933, the next big thing was gambling.

Meyer Lansky, known as the “Mob’s Accountant”, became important in the gambling scene in Miami, while his brother Jake lived and worked in Hollywood. But it wasn’t really Hollywood which became the center of Broward County’s illegal activity going into the ‘30s.  It was Hallandale Beach, a farming city, which soon had speakeasies, drinking establishments and gambling casinos up and down its eponymous Boulevard.

Hallandale was indeed the “hotbed of sin” of Broward County in the ‘30s.  The local farmers often made good profits selling their products to the casinos,  and other local residents were happy to take advantage of the employment opportunities provided by the illegal establishments.

These businesses flourished, helped along by Broward Sheriff Walter Clark, who allowed slots and casinos to thrive in the county in the 1930s and ’40s and even held a share in one, according to an article in the Sun-Sentinel on May 09, 2005.

In fact, in the ‘30s and ‘40s, Hallandale had legal slot machines everywhere — in drugstores, gas stations, stores and even fishing camps.

Hallandale was a gambler’s paradise and soon became known as the “Wall Street of South Florida”, due to the many banks and other financial companies that had opened there to support the illegal gambling trade.

But while all that gambling was taking place in Hallandale, the guys in charge kept their families safe in the adjacent and beautiful city of Hollywood.  Who were these wise guys?

Meyer and Jake Lansky, Julian “Potatoes” Kaufman, and Vincent “Jimmy Blue Eyes” Alo were the most famous of Hollywood’s big criminal names in the ‘20s and ‘30s. Upon their arrivals, all began to give generously to Hollywood’s churches, synagogues, fraternal organizations, hospitals, and more.

Following their lead, other locals who supported them and their businesses also became big contributors to the city’s organizations, and generally, most city leaders and residents looked the other way and didn’t make a fuss over what was going on.

Meyer Lansky was undoubtedly one of the most famous mobsters of all time.  While he was a resident of Miami, his brother Jake made his home at 1146 Harrison Street.

Jake kept a low profile compared to his brother, but was known to be at his side and also a money-counter both in Florida and later in the family’s Las Vegas operations.

His neighbor at 711 Tyler Street,  Benjamin Eisen, was the head Financial Officer for Gulfstream Racetrack, and was also the bookkeeper for the Lansky family.

After nearly 50 years of involvement with organized crime, Meyer Lansky was never found guilty of anything more serious than illegal gambling. At one time, he was said to be worth an estimated $20 million (equivalent to almost $200 million today) or more.

He died of lung cancer in 1983 at age 80, leaving behind a widow and three children. On paper, he was worth almost nothing.

He is buried at Mount Nebo Cemetery in Miami Beach.

The son of a millionaire commodities commission agent, Kaufman supposedly didn’t have to work but did, trading in the potato market — hence the nickname — then in criminal underwriting and deal making, and then in gambling. He was important in the Chicago underworld, running one of the ritziest casinos in the city.

Julian Kaufman was a Chicagoan who was on the run from Al Capone.

Eventually though, he made it onto Al Capone’s hit list of people that have to be murdered, and was supposedly sent to Florida to be “protected” by the Lanskys and their cronies.

He settled in at 1321 Tyler Street and opened up a casino in a former tomato packing barn in Hallandale.  Called the Plantation, it became one of the era’s most famous casinos.

It was, in fact, Kaufman who alerted the Lanskys to the potential of Hallandale.

Hallandale soon was home to all types of gambling establishments.  Kaufman and the Lanskys soon teamed up with another well-known mobster, Vincent “Jimmy Blue-eyes” Alo, and opened another casino in Hallandale, the Colonial Inn, which was a “carpet joint” — a fancier, upscale gambling establishment — with bookmaking, roulette and craps tables.

Kaufman died of a heart attack at age 40,  avoiding prosecution for his crimes. He is buried in Chicago.

Alo had been the overseer of clubs, speakeasies and illegal gambling in Brooklyn according to Wikipedia. After Kaufman took on the Plantation, Alo and Lansky opened several more gambling establishments including the Barn and the Colonial Inn in Hallandale.

They also opened the “It Club” on US1 between the port and the airport (a strip joint, now gone), and had a bookie operation in the Hollywood Yacht Club. They ran the upscale Club Boheme, and the Club Greenacres, according to Dr. Mickelson’s blog.

Alo lived at 1248 Monroe Street, on South Lake. The character Johnny Ola, portrayed by Dominic Chianese, in the film The Godfather Part II (1974) is based on Alo.

Alo outlived most of his pals — he died of natural causes in 2001 in Florida at age 96. His remains were interred in Woodlawn Cemetery in the Bronx.

The Most Famous Places

While Hallandale was home to most of the gaming establishments in the ‘20s and ‘30s, Hollywood was also pretty busy. There was the Rainbo Grill, and a few others on Hollywood Boulevard, and more on the Beach, well before the Hollywood commission gave gambling the official okay in 1948.   Casino owners were occasionally put in jail but the gaming continued.

By far, the best-known hangout for the mobsters and gangsters wasn’t a casino at all but a bar and restaurant that occupied the space on the Intracoastal that is now GG’s Waterfront Bar and Grill.

Joe Sonken’s Gold Coast Restaurant had been named one of South Florida’s best restaurants by the Miami News.  It was a hangout for movie stars like Frank Sinatra and Sammy Davis Jr. and it was also a popular haunt for the Lanskys and their pals.

Another Chicago native, Sonken was said to be close to many of that city’s organized crime figures.  Sonken opened the Gold Coast Restaurant in late 1953 and quickly began attracting a celebrity clientele. He was tough, protective of his customers and their privacy, and a master at publicity.

Quietly, Joe Sonken’s Gold Coast Restaurant became known as a place where rival mob factions could meet and get along. Meals were eaten and deals were made.

Despite lots of attention from the law, The Gold Coast remained open for 45 years. The few criminal charges brought against Sonken never stuck, and in May 1994, the restaurant was sold and turned into a Miami Subs Grill.

He had amassed a multi-million dollar fortune, and left the bulk of it to local charities, most notably Nova University.

Joseph Sonken died at age 83 in 1990 with no wife or children, in Plantation, Florida.  Sonken is buried in Mount Sinai Cemetery in Miami.

The End of an Era

On May 3, 1950, the Senate established a five-member Special Committee to Investigate Organized Crime in Interstate Commerce, to be headed up by Tennessee senator Estes Kefauver.

The committee quickly shut down illegal gambling in South Florida.  Lansky and his people went to Cuba, where they flourished in Havana until the Castros came into power, and from there to Las Vegas.

“Everything we did back then is legal now,”  Jimmy Blue Eyes was said to lament soon afterwards.

Years later, Meyer Lansky, it is said, was asked why, being the brilliant businessman that he was, he never went legit.