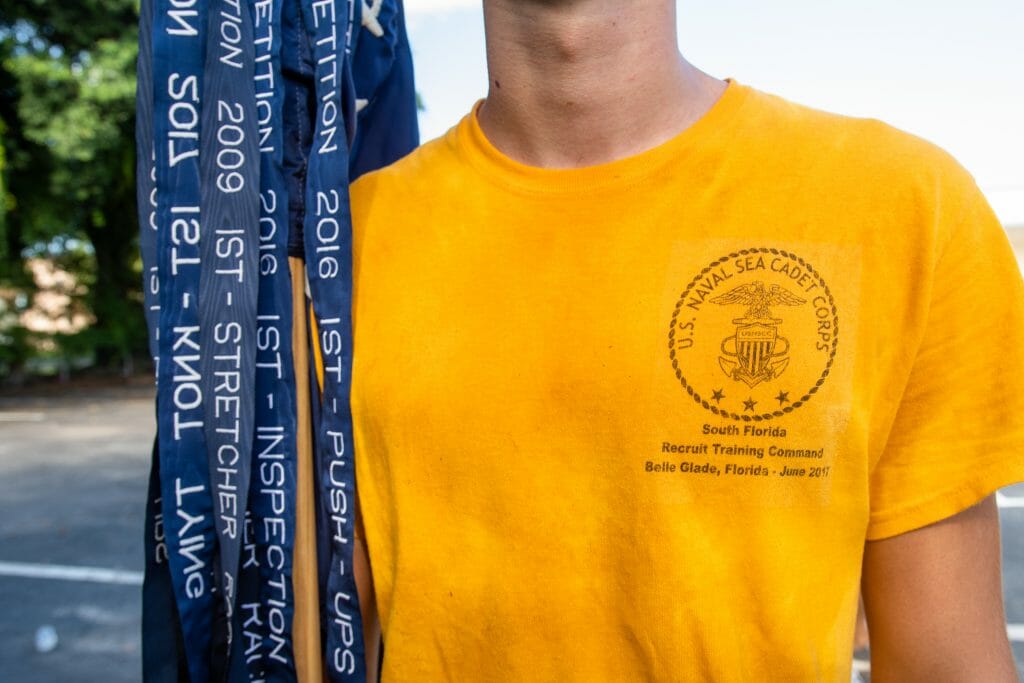 On October 12, about 500 runners — hopefully more — will greet the sunrise at Charnow Park on the Broadwalk for the Pursuit of Honor, Courage and Commitment 5K Run/Walk to benefit the Wounded Warrior Project and the Fort Lauderdale Sea Cadets.

The name comes from the Navy’s core values, according to Race Director Lynn Atkinson.

This is the ninth edition of the event, which is sponsored by the Fort Lauderdale Council of the Navy League of the United States, the nonprofit, civilian, educational and advocacy organization, founded in 1902 with the support of President Theodore Roosevelt.

The Navy League supports America’s Sea Services: the Navy, the Marine Corps, the Coast Guard and the U.S.- flag Merchant Marines. They lobby Congress and educate the public about the importance of the Sea Services, and support the new generations of students entering them.

The League’s signature youth group, and the beneficiary of half of the event’s proceeds, is the U.S. Naval Sea Cadet Corps, said Atkinson, who runs the League’s parents’ group as well as the run/walk event.

“The Sea Cadets are our main focus in terms of building the leaders of tomorrow,” she said proudly.

The Sea Cadet program is a national youth leadership development organization that promotes interest and teaches skills in naval disciplines.  It aims to instill strong moral character and life skills through leadership and technical programs modeled after the Navy’s professional development system. The Naval Sea Cadet Corps is for high school students age 13 – 17, while the Navy League Cadet Corps is the Junior program, for middle school students ages 10 to 13.

Atkinson’s involvement with the Navy League and the Sea Cadets was almost a direct outcome of the events of 9/11.  Her son, Adam Drucker, was 11 years old at the time, with a young boy’s fascination in all things military. A planned trip to Washington DC, postponed due to the attack, fueled his desire to protect his country and fight terrorism, and in middle school he announced his plans to join the US Naval Sea Cadet Corps.

Soon after, Atkinson, a neurosurgeon practicing at Memorial Regional, left her practice to become a full-time mother and eventually took on a leadership role at the League, working with the other parents and instructing the students in First Aid and other medical subjects.  Another League mother had started a 5k race for a different non-profit, and the idea for this one was born.

Almost 13,000 kids participated in the US Naval Sea Cadet Corps in 2017, with 317 units in 46 states plus Puerto Rico and Guam.  Cadets take part in local Navy, Marine and Coast Guard events, compete in drill teams against other Sea Cadet units, (there are five in the tri-county area) and receive ongoing training aimed at careers in the sea services or the marine industries.

Summer trainings take place all over the country and even internationally.  They can, said Atkinson, be anything from culinary classes to firefighting to air traffic control to scuba diving.

“Anything and everything you can use in a career in the Navy,” she said.

Throughout their training, Cadets take the same courses as enlisted people would take to advance in rank, and as they advance, they teach the new recruits.

“We try to give them as much leadership training and autonomy as possible,” explained Atkinson.

The Fort Lauderdale unit meets every Saturday during the school year at their headquarters building near Port Everglades, and on one Saturday a month they go to the Coast Guard station in Dania to train in nautical skills.  All the instructors and adults who support the cadets are volunteers, and while the group receives some funding from the Navy for summer training, expenses for everything during the school year must be covered by private donations.

The benefits for the kids that join the Cadets are plentiful.  Over half go on to college and may receive scholarships and enter military service as officers. Others go directly into the military.

“Now they have all kinds of interesting things you can go into,” she stressed.  “My son, for example, went to the US Naval Academy and studied computer science and he got a great education — he even had instructors from the NSA (National Security Agency) teaching computer science!  They can get a free education and even a small salary and hardly any expenses during school, and when they go into the military they can go in as officers.

“A lot of kids don’t necessarily go into the military but they still have the skills they’ve learned,” she continued. “For the most part those who finished the program are focused, have career plans, and know what they want to do.  It gives them a lot of opportunities they wouldn’t necessarily even know anything about otherwise. We’re building leaders and making these kids into good, productive citizens.”

The  Pursuit of Honor, Courage and Commitment 5K Run/Walk is always held at the beginning of October to coincide with the birthday of the Navy on October 13, said Atkinson.  This year it will be held on Saturday, October 12, and it should be a grand event.

The first 500 registrants receive “cool tech shirts”, and the first 500 finishers will receive “awesome finishing medals”. There will be a color guard, (military of course), a pre-race pasta dinner the night before,  a post-race breakfast provided by Whole Foods Market, a Kids Fun Run and Awards Ceremony,  raffle prizes, and more.

Entry fee is $25, $15 for students and $5 for military and first-responders.  About 500 participants are expected, and the Navy League is hoping to raise between 25 and 30 thousand dollars.  Teams are welcome and encouraged.

“Every year, it grows,” reported Atkinson.

She said that the group plans to split the proceeds between the Wounded Warrior Project and the Fort Lauderdale Sea Cadet operations.

“It started as a fundraiser,” Atkinson explained, “and as a motivating goal for the kids. But mainly, the money we raise is for operations, to make sure our kids don’t need to pay a lot towards their activities during the year.”

Race Morning
Saturday, October 12  — 6 am
Race Starts 7:30 a.m.
Packets and bibs may also be picked up on Race Morning starting at 6 am