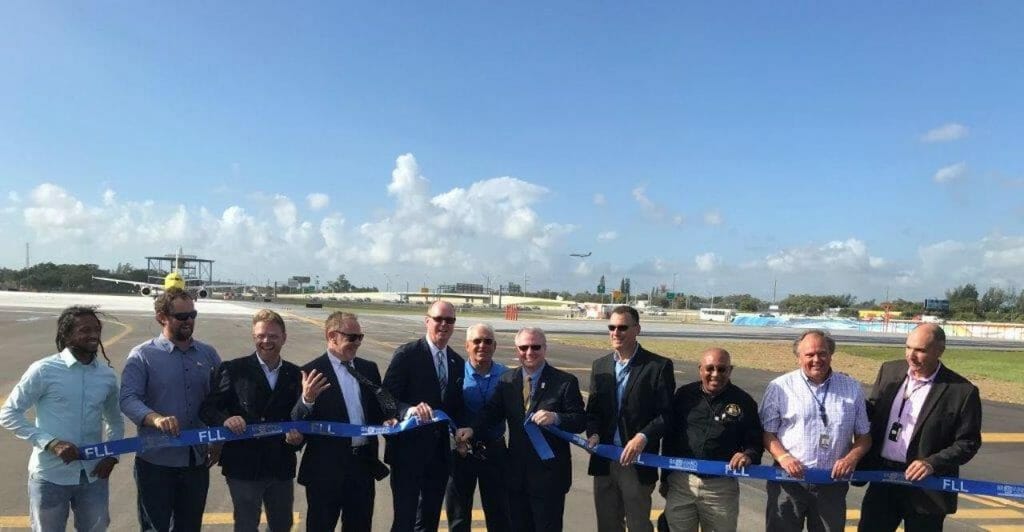 The North Runway at Fort Lauderdale – Hollywood International Airport officially reopened on the morning of October 1. This follows an intensive 120-day rehabilitation.

In the week before the reopening, multiple construction crews worked 24/7 to prepare the runway for resumption of flights, according to Arlene Satchell, spokesperson for the airport.

This followed a four month closure for major rehabilitation of the runway. The estimated $95 million reconstruction project began with preliminary taxiway work in late March followed by the runway’s closure on June 3 for reconstruction.

The Broward County Aviation Department hosted the “relaunch” event. Spirit Airlines Flight #404 to Atlanta was the first passenger fight to depart from the rebuilt runway. As the flight taxied for departure, many of the guests cheered and waved toward the airplane as it prepared for takeoff.

The runway’s return to service will allow the Federal Aviation Administration to more evenly disperse flight activity over the airport’s runways. Having two operational runways will reduce the potential for delays and improve the efficiency for the airlines. Reduced taxiing time means less burning of fuel and fewer aircraft emissions.

During Phase Four of the project, the runway will close each evening from midnight until 6:00 a.m. for 30 to 45 days to complete ancillary work. The remaining project activity, which includes rebuilding about 2,000 feet of Taxiway B, will continue through March 2020, according to Satchell.

The runway project included a public art component that was unveiled during the opening ceremony. The Broward Cultural Division worked in partnership with the Aviation Department to create “In-Flight,” which embodies the artist’s vision of nature and flight.

The mural now decorates the jet blast deflector at the west approach end of the runway. The deflector protects the public and airport employees from the exhaust blast as jets prepare to takeoff, according to Satchell.