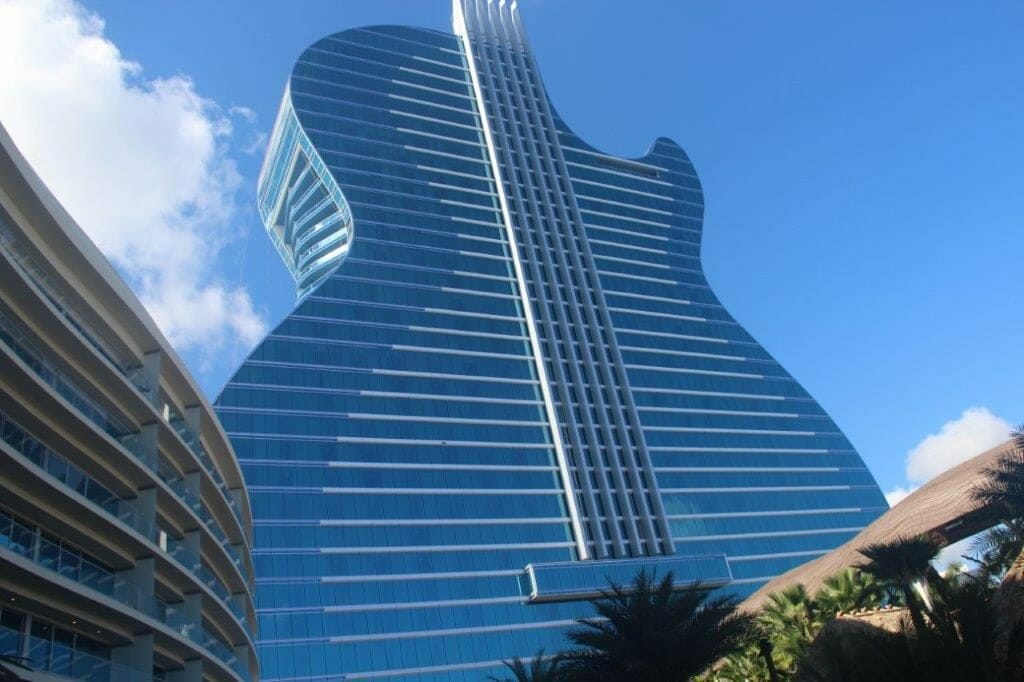 “This will put us in a solid position here for the next 50 years,” said James Allen, chairman of Hard Rock International and CEO of Seminole Gaming “We’ve created about 4,000 permanent jobs in our hotel and casino operation and around 3,000 construction jobs.”

The $1.5 billion expansion includes the opening of two new hotels. There is the iconic 450-foot tall Guitar Hotel with 638 luxury guest rooms and suites. The rooms have floor to ceiling glass panels. And there is the seven story Oasis Tower featuring 168 rooms, complete with swim up suites.

Seminole Hard Rock Hollywood will tout a total of 19 unique concept restaurants and 20 bars. They include the DAER Dayclub/Nightclub over looking the resort’s pool lagoon. The expansive 44,000 square foot indoor/outdoor complex known as DAER South Florida will feature performances.

Bars such as Entice, an upscale venue featuring three full liquor bars, Oculus, located centrally in the hotel lobby  and the place to see and be seen,  L Bar, the resort’s intimate cocktail bar, Center Bar, which features 125 seats, video poker machines, a DJ on weekends, a comedy club and more. There will be restaurants including a contemporary Italian restaurant, a solid fuel grilling concept, new 24 hour restaurant offering time honored classics and more, offering many dining options.

Guests who arrive via a new grand entrance porte cochere, The Oculus is a sight and sound extravaganza combining elements of water, fire and technology in a series of floor to ceiling shows choreographed to music.

The expansion will feature a 42,000 square foot Rock Spa and Salon Oasis with 21 luxury treatment rooms and a 26,000 square foot retail promenade with boutique retail storefronts and more.

Also, there is a 13.5 acre pool lagoon with three waterfront areas for a variety of activity. Options include a beach style experience, created with locally sourced Florida sand and including comfortable beach chairs. There will be a tropical lagoon style setting including waterfalls and palms. There will be a large water expanse, nearly as long as three football field, that will offer water activities such as canoeing and paddle-boarding.

The expansion of the casino gaming floor will bring nearly 200 table games and house more than 3,000 slot machines and 45-table poker room. Guests will have a variety of gaming options with a new High Limit Slots room as well as non-smoking gaming rooms for both slots and high limit slots.

The grand opening on October 24 was a big event. There was a star-studded red carpet, a large Guitar Smash, a VIP pool party and a first ever light show emanating from the Guitar Hotel façade.