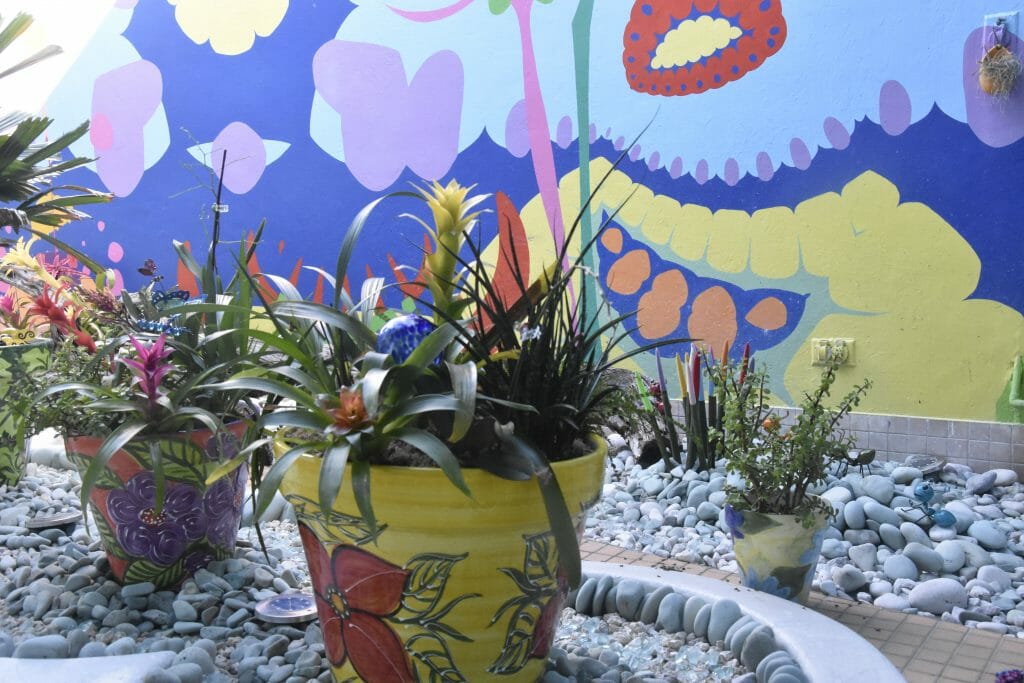 The area where the fountain is had been painted in 2012 with a beautiful mural by local artist Jose Alvarez.  But still, the space was not being utilized to its fullest capacity. And now there was this leak.

So the staff at the Center reached out to Ridge and Sherry Crewss, who are longtime members and supporters and also the owners of Ridge’s Landscaping & Lawn Service Inc., to get a quote and some ideas to turn the fountain into some kind of a planter, said Leo Sarmiento, Communications and Partnerships Director.

“Well, not only were they more than willing to help, they actually built us this beautiful container garden, and they donated everything!” Sarmiento told the Gazette.  “So I thought it would be a nice thing, to let the community know the story of two of our members who decided to step up and create this wonderful garden for us at no cost to the Center.  A community business and resident helping out a local non-profit!”

And what a job the Crewsses did!  Ridge, a full-time landscape artist and lawn care specialist, and Sherry Lyn, his wife and business partner and owner of Interiors by Sherry Lyn, really got creative.

“They contracted Ridge to put some landscaping in,” said Sherry Lyn. “But when I saw the mural, I said we had to take it one step further, we had to create a whimsical garden to brings that mural to life.

“I envisioned something lively and fun, using the colors in the mural. So if you look closely, you’ll see there are fun little things hidden all around — fairies and mushrooms and ants and a lizard, butterflies and flowers. There are lots of little hidden surprises.”

While many of the items were purchased expressly for the garden, some were reclaimed and repurposed, such as the the driftwood which came from Hollywood Beach, and the shiny red bicycle, rescued from a Hollywood neighbor’s trash, which Ridge sanded and painted for use in the colorful container garden.

The couple used a variety of native and other plants, including bromeliads, orchids, air plants, and cactus painted with organic velvet-textured paints that don’t hurt the plants, plus four different types of rocks painted to look like sea glass.

The Crewsses are long-time residents (almost natives!) of Hollywood, and have four children and eight grandchildren.

We could say more, but in this case, it’s best to let the garden speak for itself.  And next time you’re downtown, be sure to stop by the Art and Culture Center/Hollywood and take a moment to relax and admire, and take your own inspiration from, the beautiful new garden that Sherry Lyn and Ridge Crewss built.

“It was really so very generous of them,” added Joy A. Satterlee, Executive Director of the Art and Culture Center/Hollywood.  “It is really beyond what we expected.

“It’s such happy place. It superseded my dreams.”

The Art and Culture Center/Hollywood is located at 1650 Harrison Street.