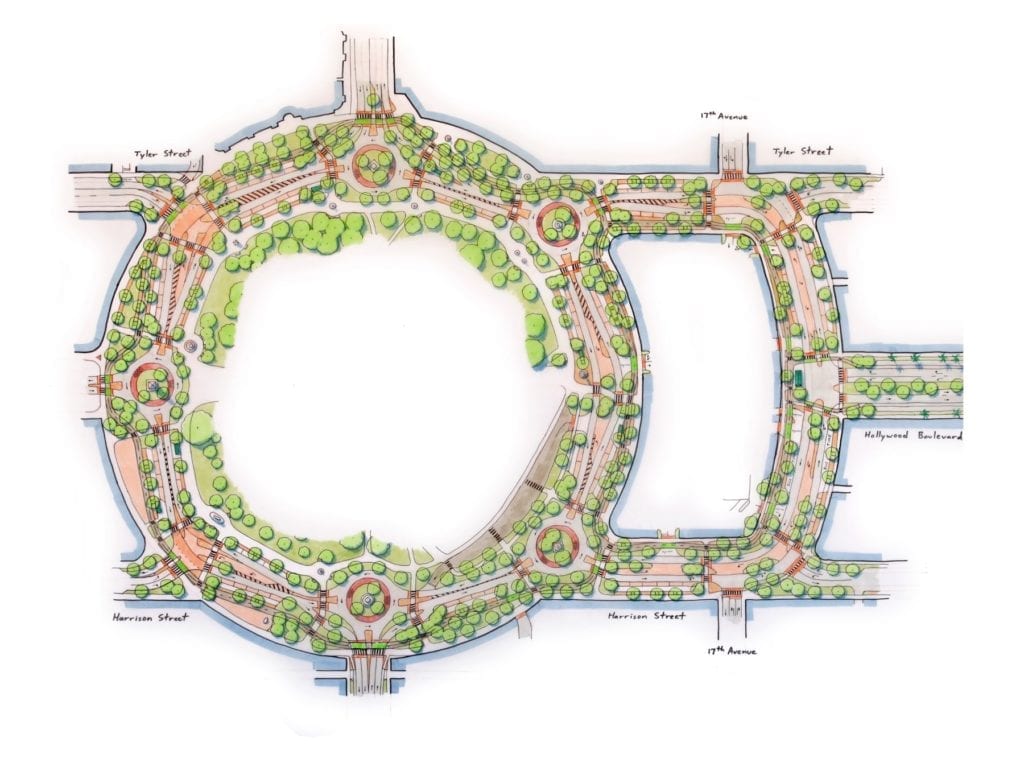 Approximately 50,000 drivers a day traverse Young Circle encountering congestion, confusion and frequent accidents. To meet the demands of an increasing population, the Circle may go from having seven stop lights to none with five roundabouts and two-way traffic by 2025.

The cost of the redevelopment is projected to be as much as $20 million upon completion as preliminary analysis of the redesign continues.

Some residents are opposed to the redesign. Hollywood resident and activist Patricia Antrican responds to criticism by encouraging involvement. “I have been involved since this concept was introduced,” she said. “Every time they show the conceptual ideas they evolved, always adapting to input. The only way to effect change is to get involved with your local government.”

Hollywood has invested $300,000 for expertise in roadway design, traffic engineering, visioning and oversight by Marlin Engineering and Toole Design. And the Commission recently approved an additional $500,000 to optimize plans needed to meet approval by the Florida Department of Transportation.

Vice Mayor Traci Callari is strongly in favor of the project and changes.

Commissioner Peter Hernandez said, “I can tell you residents feel it is difficult to traverse the Circle. I’ve spoken to people who are skeptical and don’t want it. I think the Circle doesn’t work. I would like to see changes and a proposal that works,” he said.

Commissioner Caryl Shuham said she believes that a workable plan will ultimately be developed.

Mayor Josh Levy added, “I think what’s been presented is not going to be the most feasible solution. I look forward to a practical and achievable solution.”

Challenges of improving walkability, connectivity, accessibility, aesthetics, safety and operational aspects are being addressed in the redesign. “The end product will be a concept design, which will include better circulation around the circle, a two-way separated bike lane, and a pedestrian realm which creates a sense of place,” according to the Hollywood Community Redevelopment Agency.