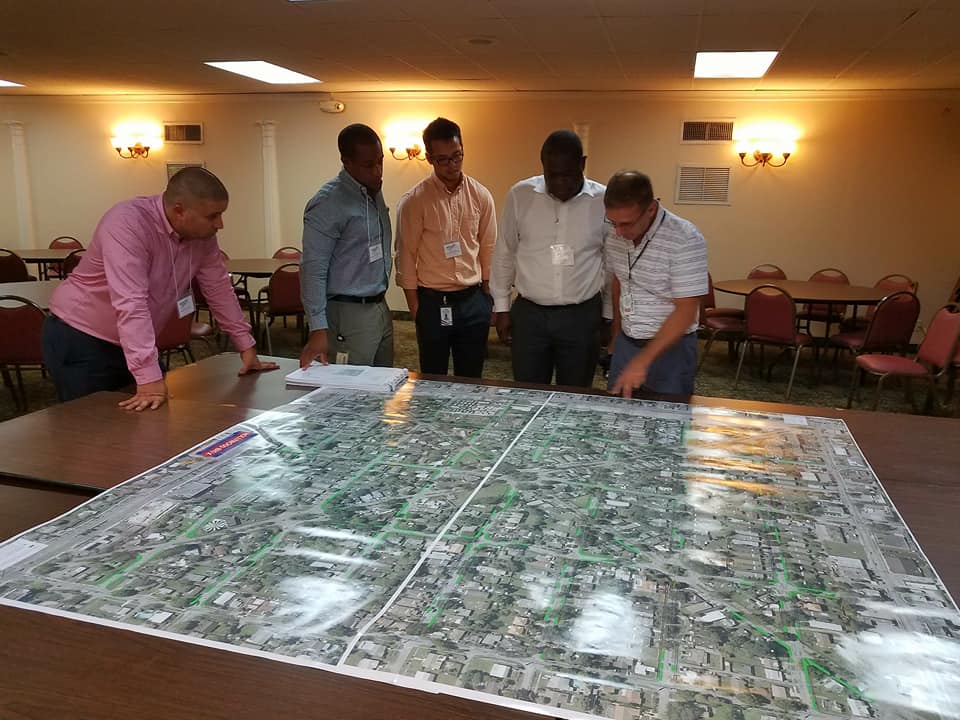 After attending a half dozen or so civic association meetings around Hollywood, this write was starting to feel like they were all more alike than different. But immediately upon entering the room for the Hollywood Gardens West Civic Association meeting, she could feel the difference.  Of all the associations, this one, which covers only the area from 56th Avenue to US Route 441/State Road 7, and from Hollywood Blvd. to Taft Street, has perhaps the most of a small town feeling.

“For a long time, the area didn’t even really have a name,” said Idelma Quintana, the founder and president. “The property appraiser called it Hollywood Beach Gardens, the Hollywood Police Department called it Roseland, many people just referred to it as the 441 corridor.  Then we started the the Civic Association in 2012, and we gave it a name!”

But the area, although small, has not one but two commissioners, Richard Blattner and Linda Sherwood, and Quintana and her husband, Robert Hayden, an acupuncturist and businessman in the local Johnson Street Business District, treat their area like any big city.

On a table lays a series of laminated sheets, showing the association’s Mission, Vision and Strategies.  Residents of the area since 2002, Quintana and Hayden started a neighborhood Business Owners Association a year after starting the Civic Association, upon moving their business closer to home.  Recently, the business association worked closely with the city through the installation of new sewer, water and drainage lines on Johnson Street. Although disruptive to the business district for way longer than anticipated, the changes opened the area for additional types of businesses, most notably restaurants. Thankfully, they say, business there is almost back to normal, and expected to thrive.

Quintana is well-suited for her position with the association, perhaps a bit because her day job is as the Chief of Staff to Broward County Commissioner (and last year’s Broward County Mayor) Beam Furr.  But more so, probably, because she really really cares about the place she calls home.

The neighborhood, she said, is probably about 40% renters, but, she pointed out, the renters are very often people who care about the neighborhood and even belong to and attend meetings of the association.

The agenda is written in both English and Spanish, to accommodate the resident base, and Quintana is happy to provide translation where necessary.

First, as with many meetings, are the announcements.  Then, like in all the associations, we heard first from Hollywood Police Dept. officer NTL Yaz Martinez, and then from the code enforcement officer, in this case, Katia Silva.

Officer Martinez did not, like many of the other police officers, give statistics from month to month.  Instead, he talked about year to year, and explained the different categories of crimes, and then he gave the good news — crime is down this year in all categories in the association’s general area, except for burglary, which he said is up 10% this year to date.  But upon probing, he explained that it was actually up only 2 incidents, from 20 to 22, which everyone agreed is not bad at all.

He talked about car break-ins, mentioned “crimes of opportunity”, and reminded people, once again:   Lock your cars. Don’t leave valuables on the seats.

He discussed, with Commissioner Blattner adding his kudos, how new technology and talent in the HPD has made our force more effective in finding and arresting criminals, and recovering stolen property, than ever before.

In answer to a question from the audience, he mentioned that he did not see a decrease in crime in the neighborhood now that the kids are back at school.  It appears that there are well-behaved kids in this area.

“You should mention that in the article,” said Quintana.

It was not a typical, dry listing of crime statistics, but like we said before, this was just not a typical meeting.

Officer Silva, although not the regular code officer in the area, was standing in tonight for Ernst St. Jour, and said that St. Jour writes over 100 violations a week. Her message from him: “If you see a problem, don’t hesitate; call us, any time. That’s why we’re here.”

After a discussion of some local code compliance issues — graffiti (already!) on new street poles on 441, trash and bulk pick-up, and the city’s new contract with WastePro — next up were the two commissioners, Linda Sherwood and Richard Blattner.

Sherwood started with an apology — the water bills, due out a few days later, she said, would be a little higher than before.

“For five years,” said Sherwood, “we’ve had no rate increases.  This is the first time since then, and it won’t be that bad,” she promised.

Sherwood announced that the city has a new Public Utilities Director, a new Public Works Director, and a Director of a new department, called Construction Management, which will oversee the projects of the GO Bond, the Penny Tax, and the ILA money.  In addition, she revealed that the city has been awarded money to provide grants to local businesses for external improvements. What a great thing to go along with the improvements on 441 and Johnson Streets!

Quintana then talked of several other neighborhood improvement programs that give money to homeowners for other residential upgrades, some of which could be available to qualified residents in the area.

“How do people find out about these things?   Who do we call?” asked the attendees.

“Come to the meetings, bring your neighbors,” replied Quintana, who almost single-handedly works to keep everyone in the loop.

Dick Blattner then took the floor, proudly reporting that the HPD had recently been accredited as a Class One department, the highest level of accreditation that a police department can achieve in the state of Florida.

“Congratulations to the HPD,” we say.

Blattner reported in on a large construction project on 56th Avenue, and discussed a proposed test project where the city would purchase and rehab a local multi-unit property that already has liens on it, and then either sell it or even better, rent it and develop a ‘model block’.

“We are very excited to make this kind of an impact in the community,” he said.  He will report back on the progress of the project.

At the end of the meeting, the discussion returned to getting the word out about the info on all the things available to residents of the community.

“Come to the meetings, and find out that you might be eligible to get money,” reiterated Quintana.

“We only know what’s really going on when you tell us,” said Sherwood.  And echoing what her colleague Commissioner Traci Callari said at another recent Civic Association meeting, “Be the squeaky wheel!”

The group discussed their excitement that all the work on 441 is finally drawing to a close.   Road construction is finishing and pedestrian seating and lighting fixtures are being installed.  New businesses besides car dealerships and pawn shops will hopefully soon be coming to the neighborhood.

At the next meeting of the Association, the landscaping plan for 441 will be a topic of discussion.  It is expected that the project, which will start in January, will take a year to be completed, said Quintana, and it will include the neighborhood’s first park.

Quintana says she loves the neighborhood for many reasons, but mostly, because when she wakes up in the morning, despite being so close to 441, she sees trees and hears birds, and it’s mostly pretty quiet.

“Those of us who have been here for a while have helped guide what happened, because face it, if the people don’t speak up, it’s going to happen anyway without us,” she said.

And after almost 20 years, and raising a teenage son here, the founder of the association has this to say:

“The neighborhood is changing.  And it’s changing for the better.”