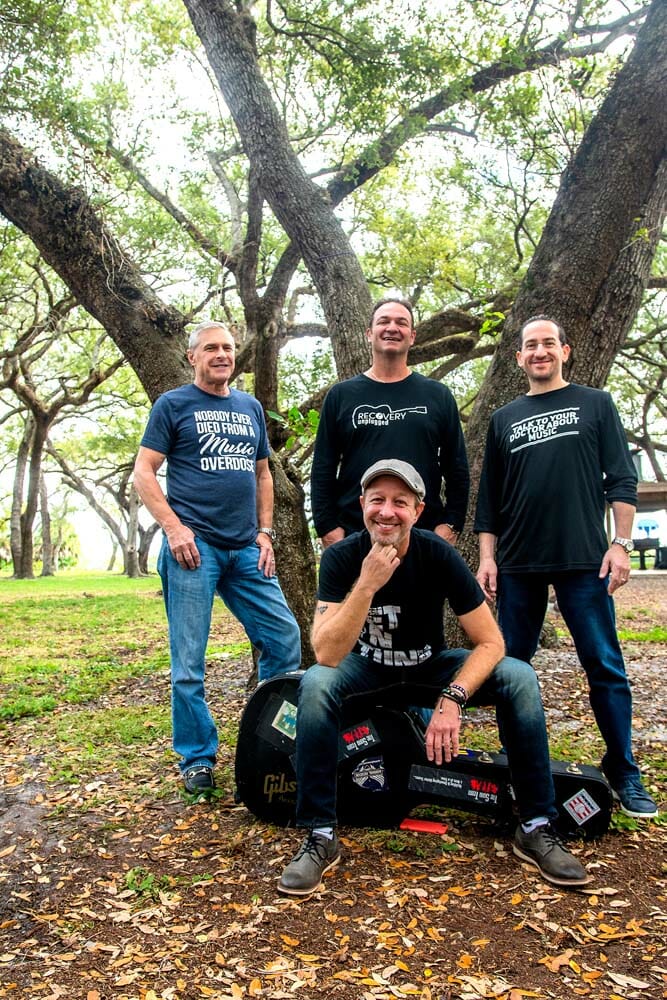 Like so many great ideas, Recovery Unplugged, and its sister non-profit organization, the Face The Music Foundation, came into being out of a conversation about a problem.

One of the many things that make this particular conversation special, at least to you and us, is that this meeting of the minds took place right here in Florida’s Hollywood.

The problem, which we hear about constantly, is the rise of addiction among not just kids and illegal drugs, but also working adults, and seniors, with alcohol and prescription drugs too.  And what’s worse, the existing methods for treating these addictions are just not working very well.  Only ten percent of people completing traditional rehab programs are able to stay clean and sober.

It’s difficult to measure the effectiveness of recovery services and all too common for individuals affected by addiction to cycle in and out of rehab several times throughout their recovery process.

Enter Recovery Unplugged, with a new approach using the power of music as a catalyst for positive and long-lasting change. And now, with its sister/partner non-profit, the Face The Music Foundation, what it’s out to do is to transform the entire addiction treatment industry, with a new, three-pronged, approach: treatment and relapse prevention for those afflicted,  working with kids to prevent the problem before it starts, and reducing the stigma associated with addiction.

Recovery Unplugged was an idea, says Paul Pellinger, Chief Strategy Officer and co-founder, born out of frustration.  After more than 20 years working in the recovery area, as a court liaison helping to put criminals with drug-related offenses into rehab rather than prison, and as a consultant helping open drug rehab centers, he was frustrated with the low success rates the rehabs were experiencing. He knew that there had to be a better way to get to the source of the issues causing addiction, and help the people suffering from it.

“There are,” Pellinger said, “some universal truths. One is that everyone loves music.  It communicates to the soul. In all my years in the recovery and treatment industry, one thing I’ve never heard anyone say is ‘I hate music.’

“So I had this idea to combine music and music therapy with different kinds of tried-and-true addiction treatment programs  to create positive and long-lasting change. We could use music to help clients maintain what they learn, actually sending them home from treatment with musical prescriptions specifically designed for them, aimed at their hearts, not their heads, to engage them to have more long-lasting effects.”

“Those dependent on illicit substances are responsible for a disproportionate number of crimes,” he stated. “Marshall will back me up on this. This is why he dedicated his life to this.”

In the courts, Pellinger had worked closely for many years with Marshall Geissler, a local criminal attorney who was also frustrated with the system. Geissler was instrumental in the formation of the Broward County Drug Court in the late ‘80s. And Geissler did indeed agree.

“As a criminal attorney with 32 years in this field,” he said, “I can tell you that it goes beyond the 80/20 rule. I would say that 95% of the people I represent are with me because of drugs or alcohol. And the vast majority of my clients are good people who just made some bad choices.”

Geissler was intrigued by Pellinger’s ideas, and introduced him to a client of his, Hollywood businessman Andrew Sossin.  For Sossin, the problem of addiction hit closer to home.

“Quite frankly,” said Sossin, “there were people in my family with drug and alcohol abuse problems, including my mother-in-law, and I was getting tired of paying for rehab programs that didn’t work.”

So the three got to talking, and in 2013, Recovery Unplugged was born.

Early on, Recovery Unplugged hooked into the natural connection with the music world and tapped well-known award-winning singer-songwriter Richie Supa of Aerosmith fame as the Director of Creative Recovery.

“It’s important to know, there’s a lot of science behind what we’re doing; this is not a gimmick,” explained Pellinger. “This is not something where you go home and listen to a song and that will combat addiction. We have medical professionals and licensed clinicians implementing proven techniques to reach the root problem, and using music to connect with the brain’s hardwired reward system.”

“Music will always find its way in: there’s no defense against it,” said Richie Supa.

And the bottom line is, it’s working. The Recovery Unplugged system is producing  statistics unheard of in the rehab community.

Where the norm is a staggering 90% failure rate, “Ours is four times better,” said Pellinger.  “Now, that’s still 60% relapsing, but I choose to look at it as that many more thousands of lives we’re saving. And, we have a 95% approval rating from clients, and the number of clients who leave us ‘against medical advice’ before their scheduled treatment is complete is less than ten percent — that’s over five times better than the average — which directly correlates to better outcomes.”

The Addict Next Door

Only about three percent of addicts are the classic “skid row alcoholics,” according to Pellinger.

“The other 97% are people like us, they have jobs, are functioning, don’t necessarily have track marks and a red nose and a brown paper bag; every single one of us has been directly or indirectly affected by addiction,” he averred.

“There have been two deaths in the last 24 months, right here in the religious community in Hollywood where I grew up,” Sossin noted. “Here we have an eclectic pool of people from different cultures, a wide range of populations. I would say that where we live is a microcosm of the country, because we have such diversity, and we have all kinds of people having these issues. I know, because I am approached almost on a weekly basis, right here in Hollywood, by people of all ages.  Last week I met someone who was 21, and a grandmother who was 66.

“That’s why we’re here.  And we’re just getting started. ”

Addressing the Stigma of Addiction

Along with curing the problem of addiction, both Recovery Unplugged and its partner, the Face The Music Foundation, are working to transform the stigma of the disease. It helps, said Pellinger, that the CDC recently reclassified addiction as a brain disease. And it also helps that so many of the famous people who made the drug culture so alluring are now on the sober bandwagon, making it hip to be straight.

“I was clear from the beginning, maybe more so than my partners, that the idea of using music to help cure addiction was a cool idea and it was going to work,” said Pellinger. “But even I had no idea that we would attract so many famous and legendary musicians who are now a part of what we do such as Dion, from Dion and the Belmonts, Steven Tyler from Aerosmith, Richie Supa who I already mentioned, rocker Candlebox, rappers Flo Rida and Ty Dolla $ign, Liberty DeVitto, who is the drummer from the Billy Joel Band, Morris Day from Morris Day and the Time…the bottom line is that as far as the stigma, these people are ‘out there’ that they’re in recovery, so we are using them as influencers to change the stigma, and to help people see that addiction is a serious disease.”

Wanting to help as many people as possible and never turn anyone away for lack of funds, the trio founded the Face The Music Foundation, the fund-raising and awareness-building partner of the organization.

The Face the Music Foundation, like Recovery Unplugged, says Pellinger, was also born out of frustration. Too many addicts were still ending up dead or in jail before they could get help because they didn’t have money or insurance.

“Not my clients,” quipped Geissler.

“So we came up with another cockamamie idea,” said Pellinger.  “What if we created our own 501(c)(3)? We already had a brilliant, Grammy award-winning songwriter on the board!”

“We could put on events, (like the one we did recently at the Circle in Hollywood, added Sossin), where the goal would be to raise awareness, solicit sponsors, build community partnerships and raise money for scholarships.”

In 2014, they started the Face the Music Foundation and began to build a schedule of music and outreach events and community programs.

The search for a new executive director for the foundation in 2018 brought the trio together with Hollywood musician, team-building and non-profit pro Jeff Jacob. Sossin and Jacob had been communicating via email and phone about Jacob joining the organization when they found themselves seated together at a Jewish holiday dinner. It was, as they say, Besheret (fate).

“I believe that everything I’ve done personally and professionally up to this point has led me to be with these guys now,” said Jacob, “helping to solve this problem, and like Andrew said before, we’re just getting started.”

While the primary goal of Recovery Unplugged is to help people get and stay sober, the leadership team of the two organizations are clear that their work doesn’t stop there.

This cutting-edge treatment is now available in five locations: Fort Lauderdale, Florida; Lake Worth, Florida; Nashville, Tennessee; Austin, Texas and Northern Virginia, with new facilities slated to open in the near future.

More importantly, Jacob believes, is to work  within the communities they serve, to prevent addictions before they start.

Face the Music runs a program called Get In Tune, established with grant money from the Broward County Sheriff’s Department.  Get in Tune is a prevention and awareness program which uses music to help underserved adolescents ages 12 -18 cope with situations such as bullying, abuse, divorce, and addiction.

“We are fortunate to partner with the Boys and Girls Clubs of Broward county and are in our second year, based on the success of the first year. The kids love us and we are overwhelmed to be able to help as many children as we possibly can,” says the Foundation’s website.

Another program, called Grace Notes, works with recovering musicians to bring music to underserved populations such as senior and special needs residences.

“Putting people into service and keeping them busy and purposeful helps them stay clean and sober,” said Jacob.

“We have now gotten requests to expand these programs into other organizations besides the Boys and Girls Clubs, and into other cities, and we should have some funding coming in to do so,” he said proudly. “In fact, at this moment we are preparing to launch programs in every major city in Tennessee in 2020.”

People have asked if Recovery Unplugged and Face The Music are faith-based organizations.

Not in the traditional sense, said Jacob.

“But we do have faith; Faith that music can do amazing things.”

After seven years of beating the odds and increasing successes, it looks like Recovery Unplugged is indeed doing that.

“Recovery Unplugged shows that music can be magic,” said supporter Steven Tyler of Aerosmith. “It can be a healing experience.”

To give help, get help or learn more, visit https://www.recoveryunplugged.com/ or https://facethemusic.org/ or contact Jeff Jacob at JeffJ@facethemusic.org.