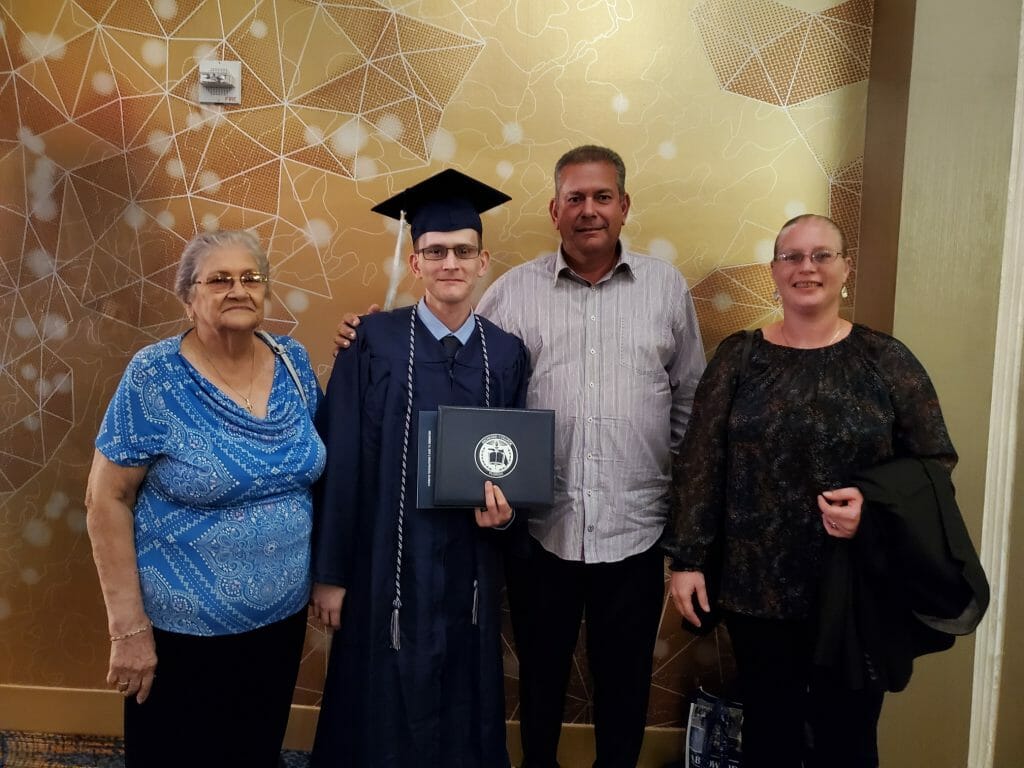 When an older person takes a bad fall, life is never the same.  But for Patrick Borges, the life-changing fall happened when he was just 25.

Sent home from work after the seemingly innocuous 2010 workplace accident, Borges began to experience worsening pain instead of healing, and was launched into a six-year roller coaster of doctors, surgeries, hospital stays, rehabs, painkillers, IVs, infections that wouldn’t heal, pain that wouldn’t end, two hip implants, and at one point, a prognosis that he may never be able to walk again.

It’s hard to imagine how such devastating news might affect a person, especially one so young. For Borges, who was born in Cuba and raised in the Czech Republic by his Cuban father and Czech mother, it caused a major deviation from his plans to pursue a career in medicine.

“I knew it was bad when a whole group of them walked into the room — the doctors, nurses, therapists, all together,”  he recalled. “Usually it was just one. When they told me that I might never be able to walk again, I thought, that’s it. My life is over. I’ll be stuck at home for the rest of my life.”

But Borges has always had a thirst for knowledge, education, and independence.  At age 14, when he moved to Miami with his father, he learned English and Spanish simultaneously. His professors were quick to notice his good academic standing, and placed him in honors classes.

“I realized very early on in my life that education was very important to succeed,” he said.   “In high school, I did not only put all my focus on learning and getting perfect grades, but I started to volunteer, do part-time work, and join student clubs.”

With an eye on a career in medicine, he became the president of the Future Physicians of America club, a member of the Principal’s Advisory Committee, and did over 500 hours of volunteer work at Kendall Regional Hospital.

After high school, Borges attended Miami Dade College, taking classes toward a business degree. But he wanted to get out into the field, so he began taking night classes at the Technical Career Institute in Miami to become a Medical Assistant, while working with his father at an electrical company during the day.

He always knew, he said, that the medical field was the professional path he wanted to pursue. Then came the accident and its aftermath, and all those plans were put on hold.

“I went into a depression. I had no insurance at that time.  I cried a lot, I thought ‘why me?’. But I saw psychiatrists and psychologists, and in rehab, I saw a lot of people who had it even worse than me, and that’s when it kind of hit me: it could be worse.”

He put his focus now into healing himself, enduring the years of boring and painful days and nights and working towards his recovery.

2015 was a good year for Borges. He met Dr. Eric Schiffman, an orthopaedic surgeon at Aventura Hospital, who performed the last surgery (for now), and he said, it finally worked.

“After the last surgery and rehab, I felt better than I had felt in years, and I knew it was time to get back on track and keep working towards the life I wanted,” he said.

In 2017, Borges went back to work as an assistant manager at a local retail store, where he met Kelly Edwards, VP at the Hollywood Jaycees/JCI Hollywood, who eventually became his significant other, and encouraged him to begin volunteering again, and to enroll in Broward College.

On December 11, 2019, Borges joined thousands of other Broward College graduates at the Hard Rock Hollywood when he celebrated completing his Associates degree, as a member of the Phi Theta Kappa Honor Society, the international honor society of two-year colleges and academic programs.

As a volunteer, “Patrick is a true asset to the Hollywood Jaycees, and his ability to go above and beyond in his volunteer work is extraordinary,” said Edwards. “He has many great project ideas that we plan to incorporate in the near future.”

For the next step to fulfilling his dream of working in the medical field, he has been accepted to the A.S. Nursing program at Broward College, and will begin classes this month to prepare for the NCLEX test, which determines readiness to begin practice as an entry-level RN. He plans to continue on for his Bachelor’s or Master’s degree to become a Nurse Practitioner or Nurse Anesthetist.

Meanwhile, he continues to volunteer with the Jaycees in various local projects, and we at Hollywood Gazette are sure that everyone reading this tribute will join us in wishing Partick Borges all the luck in the world in fulfilling his dreams, and hoping that he’ll be back to share his successes here with us in his adopted hometown of Florida’s Hollywood.

For information on Broward College’s Nursing and other programs, visit www.broward.edu