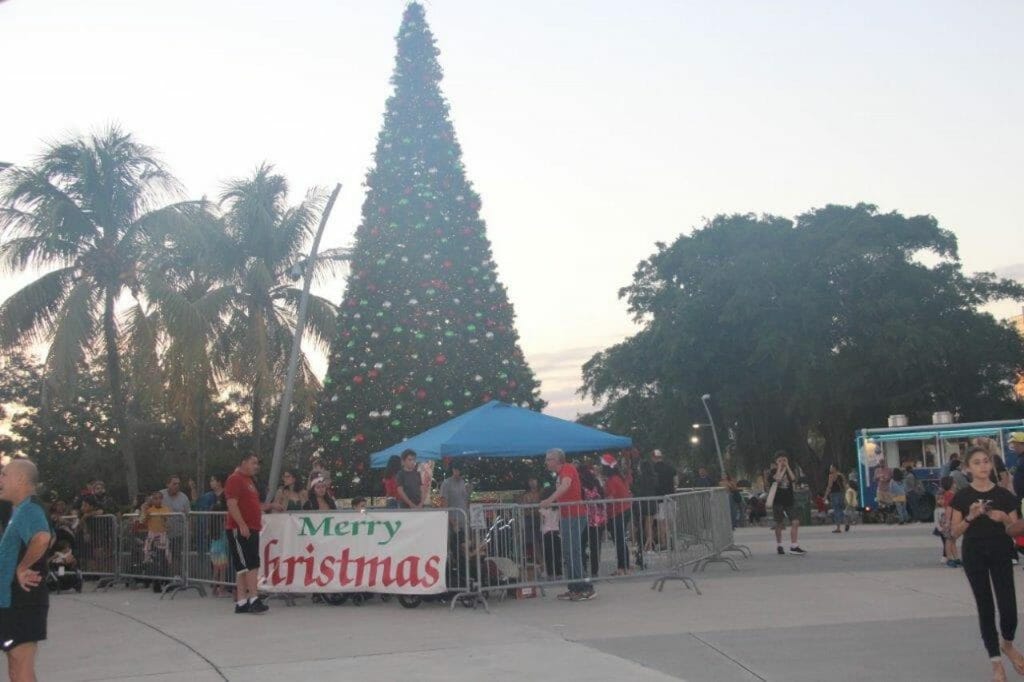 Christmas Near the Beach brings families together

Christmas Near the Beach took place at Hollywood ArtsPark on Dec. 14.

The participants in the Hollywood Gazette Scavenger Hunt were recognized for their efforts. Santa Claus arrived in a car and spoke to the audience. Baby Jesus, Joseph and Mary joined Santa Claus on the stage. Various musical groups performed. The Chaminade-Madonna High School drumline performed.

There were plenty of vendors including food trucks.

“Christmas is special and we want people from the community to come and have a good time,” said Bianca Blake, a leader of the event.

Young Circle experienced the festival of lights, as Hollywood residents gathered to participate in a Chanukah Menorah lighting event, led by Rabbis from area Chabads.

Nochum Rabin and Yisroel Dubov, both rabbis in training at Chabad of North East Hollywood and Dania, said that they want to inspire people in the community, and that they hope to spread light through the City of Hollywood in a dark time.

The director of the Chabad of North East Hollywood, Rabbi Mendy Tennenhaus shared the sentiments of the two rabbis in training.

During the ceremony where the menorah was being lit, it was announced that Chanukah is being celebrated more and more and that it is one of the most celebrated Jewish Holidays.

Her mother, Jessica Dominguez, was happy to see her daughter with a new bicycle.

Isabella Henriquez, another child, was also excited to receive a new bicycle.

The Dominguez and Henriquez were among a large number of families who enjoyed the Community Enhancement Collaboration (CEC) Holiday Toy Distribution at the Washington Park Community Center.

“I love helping families in the community,” said Nadine McCrea, founder and executive director of the CEC. “My goal is to help others and to help people in the community. We are also providing families with the food they need to have a Christmas dinner.”

Kim Newhouse, a vice president with the Hollywood Women’s Club, helped out with the event. “We support Nadine and we want to help her. We helped distribute the toys,” she said.

Mayor Josh Levy and Commissioner Linda Sherwood were also at the event.

“It’s all about the kids,” Levy said. “We are thankful members of the community contributed toys. I want the kids to have a good time.”

“I want the children in the community to have good holiday and I am glad to be a part of this,” Sherwood said.

McCrea and members of the CEC have worked to provide positive events and food for members of the community. Various faith and civic organizations worked to donate and collect toys to make the Toy Distribution event a success.