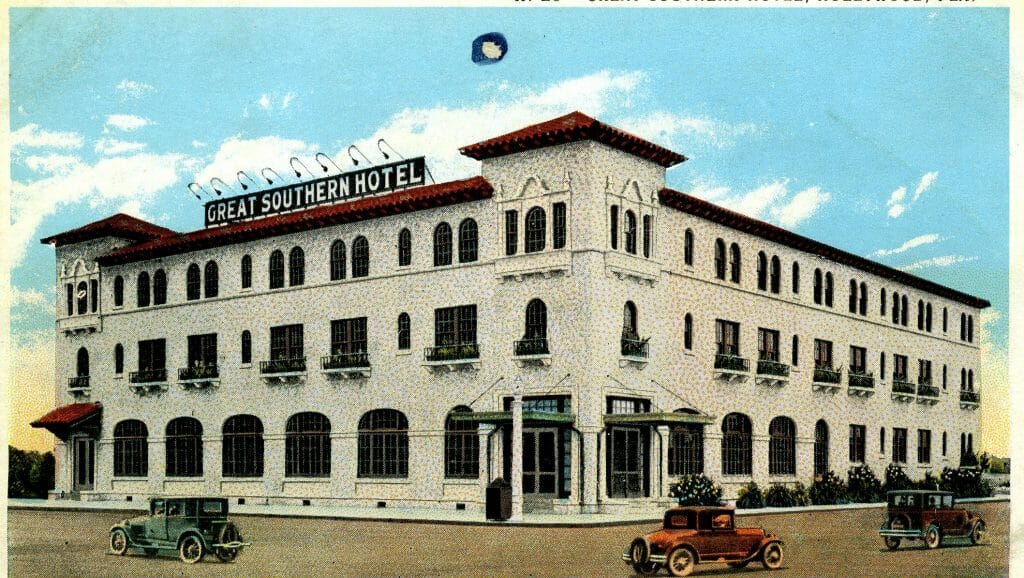 Some vignettes from the earliest years

We south Floridians are often accused of having no history, at least between Ponce de Leon and today. But when does “history” begin?

Surely anything a century old may be considered historic, and therefore I’m pleased to tell you that 2020 marks 100 years since the birth year of Hollywood By-the-Sea, Florida.

After the population rose to over 20,000 in 1925, founder Joseph W. Young had Hollywood incorporated. But Hollywood actually began to exist in 1920, when Young sent the first men to clear the initial site and lay in Hollywood Boulevard. Here are some vignettes about the city’s beginnings, to suggest its astonishing rise from empty land in 1920 to a “Planned Paradise” or Garden City in less than five years.

Future Hollywood began in an unincorporated part of Dania, a thriving community of Danish-Americans who farmed the fertile land along Flagler’s Florida East Coast Railway. Seeking a site where he could create a seaside city, Joseph W. Young, Jr., a Californian then living in Indianapolis, came to south Florida in January, 1920, by train to Miami. Perhaps he spotted the small town of sturdy frame homes and healthy farmland from his train window, for he soon hired a car to drive him north up the new Dixie Highway to Dania.

There, he apparently met with the mayor, Martin Frost, and was guided through the nearby uncultivated flat acres of palmetto and jack pines which he would soon buy. The seller, Stephen Alsobrook, with more acreage than he could farm, was surely delighted to receive $71 per acre for 1,700 acres straddling Flagler’s railroad and the Dixie Highway.

J.W. Young had no intention of farming. From the start, his plan was to create a city that welcomed everyone, from the “opulent” to the most humble. Throughout 1920, Young, wearing high-laced boots to fend off rattlers, scorpions, and chiggers, tromped all over his land and chose the site to begin an east-west “boulevard.” This was the spine of Young’s design, a wide roadway interspersed with ornamental park-like circles that led from the oceanfront to the edge of the Everglades. Once it was completed, there would be a grand hotel at either end, imposing monuments drawing motorists to explore the city from end to end.

It was 1925 before that could happen. Meanwhile, the first residents of Hollywood were those creating it, the engineers, salesmen, and laborers. Some commuted by bus from Miami or bunked in temporary dorms, frame structures that were torn down once an area was cleared and streets laid out.

My father, Tony Mickelson, head of the surveying parties, first stayed at Mrs. Bloom’s Hotel in Dania, a comfortable two-story frame structure where meals were included.

Then, like others on Young’s staff, in 1922 he bought himself two half-acre lots on the high ground in the Little Ranches, the section that lay between the Dixie Highway and 28th Avenue, intersected by Hollywood Boulevard. Here he erected a frame cottage, and when he was joined by five other engineers they hired a woman to cook for them. In those days of make-your-own entertainment, this soon became a party house with musical members playing banjos and ukuleles, and all singing along. The first permanent homes were also built in 1922, in today’s Parkside.

And where did the boss live as his land was being cleared and streets put in? In 1920-21, Young was back and forth by train from Indianapolis to Miami, so he bought the Granada Apartments on the Miami River, and also a large houseboat that he could bring up the Inland Waterway (now Intracoastal), stay overnight and entertain prospects.

For as soon as he began advertising Hollywood, the crowds came flocking in to become a part of this new city. Young realized the immediate need for a central hotel where prospects could stay as they made their decisions. Perhaps the key hotel to Young’s future success was his first, initially called the Hollywood Hotel, designed in his signature Mission Revival style and opened in 1922 on the east side of what is the present day Young Circle.

Imagine the impression this expansive three-story structure made to drivers on the bumpy Dixie Highway or passengers on Flagler’s trains to Miami. Out of vast miles of flat, empty land with occasional tiny houses rose a golden dome and taller tower, colored awnings at every window, with lights circling the tower at night. This unexpected palace successfully drew visitors down the broad boulevard to see what this vision was all about.

They weren’t disappointed. Young’s hotel was the height of 1920s resort comfort, with a marimba band adding entertainment.

Once the Circle in front of the hotel was landscaped, the name was changed to Park View Hotel. Very shortly, Young, with his wife Jessie and their sons, moved into the south wing, second floor, until their home was completed. The hotel remained on its own island, visible in aerial photos of Young Circle for decades. Eventually the name was changed to the Town House, and a swimming pool was added, with cabanas that could be rented by locals. Nothing like going for a swim in downtown Hollywood! Regrettably, a new owner decided to demolish the hotel in the 1960s and replace it with shops of uninspired architectural design. With those buildings now under the clock for demolition, it’s to be hoped that Young’s concept of a beautiful structure taking advantage of its central site overlooking the park and Downtown will be maintained.

Almost immediately after opening the Park View Hotel Young needed another hostelry for the crowds bustling in so he placed his second hotel directly across Circle Park from the Park View, on his main boulevard, as a cornerstone for Downtown Hollywood.

For this 1924 hotel, Young hired young Miami architect Martin Hampton, who had worked with Addison Mizner, and was designing Coral Gables buildings at the same time. As with all he did, Young spared no expense on this hotel, adding a ballroom, which the Park View lacked, for ceremonial occasions .

The U-shaped Great Southern Hotel (source of the name has yet to be discovered) faced east to capture the cooling trade winds. Both hotels were made with the finest materials, from poured concrete blocks to Dade County pine. Built to last, both stood solid through numerous hurricanes, even serving as temporary hospitals after the 1926 hurricane. During World War II, when the U.S. Navy took over two more of Young’s hotels for training schools, naval officers often stayed in the Great Southern.  From the late 1930s to the 1950s, Florence de Silva, an elegant (expensive!) ladies dress shop occupied the north-west corner. The first broadcast of radio station WFVL, took place there October 15, 1946.

The hotel continued to be used for local meetings and events for the next fifty years.  Sad to say, this key part of Hollywood history was approved for demolition in 2005, though other contractors sought unsuccessfully to make it a boutique hotel. Now the Great Southern, like the Park View before it, is currently under the wreckers’ ball. It will be interesting to see how the promise to preserve the north and west facades is carried out.

As a native daughter, I am baffled by what seems to be a concerted, if misguided, interest in destroying everything Hollywood’s founder, J. W. Young, created 100 years ago, thereby erasing his vision of a City Beautiful with a cohesive plan whose overall look of integrated architecture created pleasing vistas welcoming one and all to Hollywood By-the-Sea.

Joan Mickelson, Ph.D. was born in Hollywood to parents who both worked for Young’s Hollywood Land & Water Company in the early 1920s. An art historian and biographer, she graduated from South Broward High School, and has advanced degrees from the University of Chicago and Harvard University. She has published books and articles about early Hollywood. A past board member of the Hollywood Historical Society, she now enjoys serving as a volunteer registrar-archivist of their extensive collection of Hollywood documents.