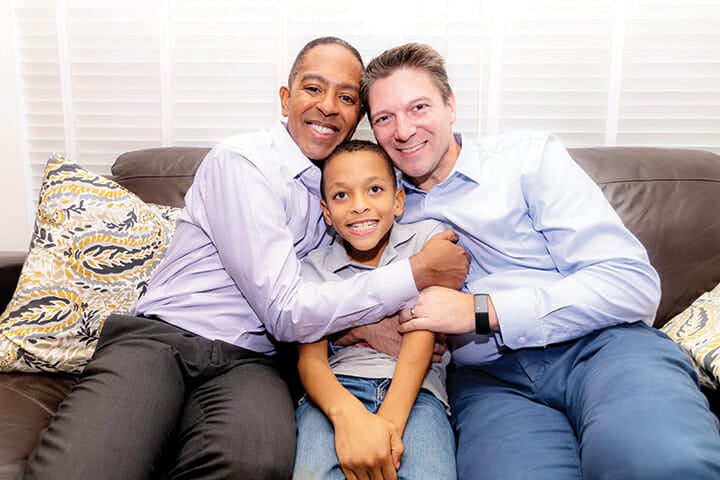 It’s a Hollywood story.  It’s a political story. It’s a historical story, a race-relations story, and perfect for February, it’s a love story.

It’s the story of Jeff and Todd Delmay of Hollywood: partners in life and business, parents, founding members of the Hollywood LGBGT+ Council, and “accidental activists” who made headlines when they were one of the first two same-sex couples to be married on January 5th, 2015, when Miami-Dade became the first county in Florida to legalize same-sex marriage, just hours before the rest of the state.

But of course, the story started long before that.

The Delmays, known then as Todd May and Jeff Delsol, met in December of 2002 at a business function, and have been together ever since.  They bought a house on Jackson Street in Hollywood and started a travel and event business in the back cottage, which still exists and is now located Downtown.

While Jeff and Todd had exchanged promise rings early in their relationship, marriage was not even on the radar for most gay couples yet. But they always knew that they wanted to be parents.

Jeff had a cousin who offered to be their surrogate, and in 2009, they began preparing for the birth of their son.

“He was ours from the start,” said Jeff.  “We were able to be there for the doctor visits, the labor, and the delivery. We cut the cord. We brought him home.”

They named him Blake, legally changed all their names to Delmay, and settled into domestic family bliss. But actually adopting Blake, who turns 10 in March, was not so easy.

In Florida at that time, it was still illegal for same-sex couples to adopt, even though single-parent adoptions were allowed. Jeff petitioned the court to adopt Blake as a single parent.

”We think the judge had an idea, of course,” recalled Todd, “and they were obligated at the time, if they suspected, to say something. But he actually asked our attorney if she wanted to do the questioning, which she did, and of course she never asked the question, ‘Are you a homosexual?'”

“Our attorney had told me to bring some friends to the ceremony, and try to ‘blend into the background.’ Most families take a picture with the judge when the adoption is being finalized. Our picture shows this kind of weird, awkward moment where it’s Jeff holding Blake, and me, sneaking in, trying to get a kind of family picture. But it’s blurry and you can see that we took it quickly, because we didn’t want to raise any suspicions.”

“If we’d have been able to marry back then,” said Jeff, “we would have been able to adopt as a family. There were a lot of injustices that at the time, and we’d think, ‘oh, it’s just sort of what you need to do to get by.’  But looking back on it, we wonder, ‘why did people put up with that for so long?”

“There was no other way then,”  answered Todd. “But there came a point when people had told their stories enough.

It’s one thing to sort of demonize ‘those people, over there.’  But when you see a real flesh and blood family in front of you, and you hear their story, that’s when the dynamics change.

Todd and Jeff had always had a dream of marrying one day, but they never really saw a possibility of it happening.

“In the early 2000s, we started to see the marriage equality movement happening in some states,” Todd explained. But in 2008, while several other states were beginning to allow same-sex marrriages, Florida voters approved Consitutional Amendment 2 banning same-sex marriage in the state.

“So at the same time that some people are coming up and saying we want to ban same sex marriages,” interejected Jeff, “there were other groups trying to allow it.”

Then in early 2014, they received a call from the National Center for Lesbian Rights, who were seeking couples to become plaintiffs in a lawsuit to sue for the right to marry.

“There were basically two main cases in Florida,” Todd explained. “One was a federal case, for those couples who’d gotten married outside of the state and were coming back home and saying, ‘we want Florida to recognize our marriage’.”  That went to the federal courts, and they overturned the ban, but delayed it taking effect until January 6, 2015.

“And then there was our case, which was filed in Miami, saying ‘we deserve the right to get married’.”

In January 2014, they joined five other couples and Equality Florida in suing the Miami-Dade Clerk of Courts, the first case of its kind in Florida. A Miami judge ruled that the 2008 ban on same sex marriage was unconstitutional, although the ruling was quickly stayed until further appeal.

Another case was filed in the Federal Courts, which also resulted in overturning the Florida ban, with a stay that was set to expire on January 6, 2015. But on January 5, the case including the Delmays was granted another hearing to address the conflict between the State’s stay and the Federal Order.

At the hearing, the judge lifted the stay– effective immediately, rather than waiting until the next day, giving Miami-Dade a half-day jump start on marriage equality. Todd and Jeff, along with a female couple in the case, had been told to be ready to get married in case that happened.

“We walked outside, and there was this huge celebration,” Jeff recalled, “And then our attorney came out and told us that the judge was willing to marry us right then!  So we and this other couple, with a herd of media, walked over to the clerk’s office, got our marriage licenses, paid our fees, and then went back to the courthouse where the judge then married us. And so we have 360 degree photos and video of our wedding because everybody was carrying it live.”

“Channel 10 ran 18 minutes without a commercial,” added Todd. “It was just this crazy, crazy moment. It was intense.”

And it didn’t end there. The next week, Debbie Wasserman-Schultz called and invited the couple to the State of the Union address. “So we consider that our honeymoon,” Todd smiled. “How many people can say that they took their Congresswoman on their honeymoon?!”

“In his address, President Obama used the words Lesbian, Bisexual and Transgender for the first time by any president. And he talked about how marriage equality had gone from being a wedge issue to being the law of the land, how things had changed, and how different it was. It was such a unique experience.”