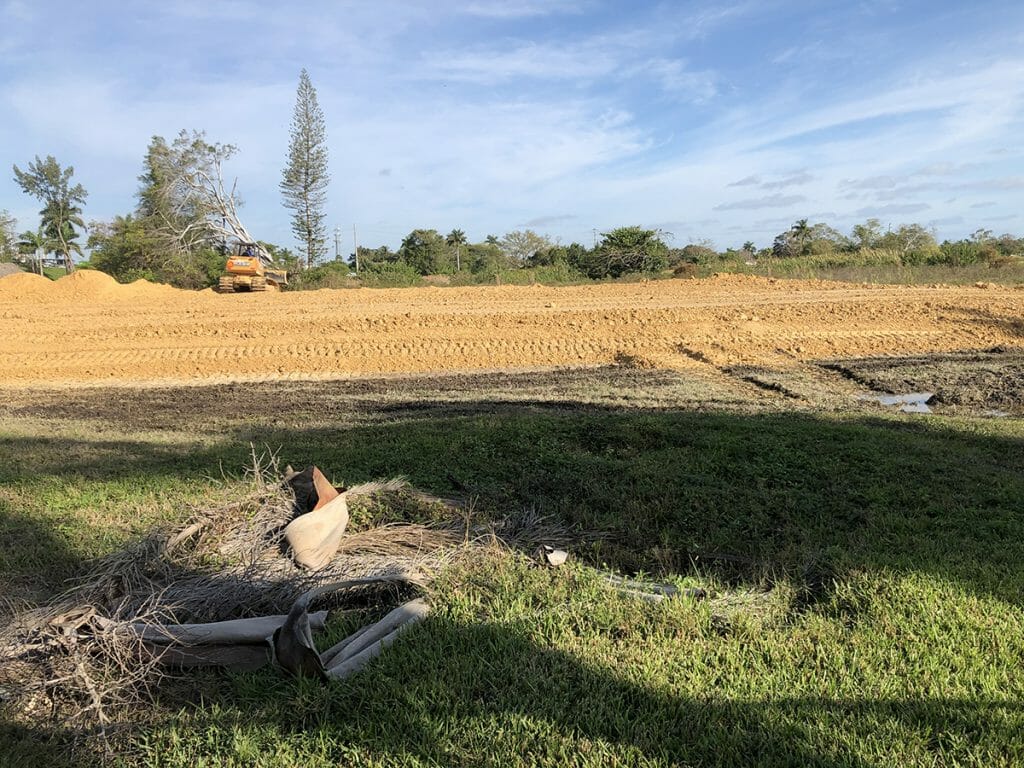 Hollywood’s plans to buy a former golf course and convert it into a nature preserve and passive public park are moving slowly amid concerns about the owner’s controversial decision to lay down a thick layer of lime sludge across the site.

The land is located just east of I-95, at 2727 Johnson St. Its purchase has been complicated because it is contaminated by arsenic, a problem common to ex-golf courses due to long-term use of herbicides and other chemicals to maintain grass and greens.

In August, a permit for a pilot “soil management test program” for the ex-Sunrise Golf Course was approved by Broward County. City records say the program called for spreading “water treatment residuals from the lime softening material used in the water filtration process at the City of Fort Lauderdale’s Charles W. Fiveash Regional Water Treatment Plant to be blended into the soil on a portion of the site.”

The use of sludge, mostly calcium carbonate, is allowed by the Florida Department of Environmental Protection as clean fill to remediate “low levels of arsenic found in topsoil,” the records say. “If the results show success, then the property owner can seek to expand the blending of clean fill into the soil to remediate the entire site.”

The blended lime sludge is intended to dilute the arsenic contamination concentrations “to below residential target levels,” said David Vanlandingham, an Engineering Unit Supervisor who manages Broward County’s Cleanup and Waste Regulation Programs. “As they say, dilution is the solution to pollution.”

The owner is Richgreens, a limited partnership led by Richmond Italia, a Canadian businessman Richgreens obtained a county Environmental Assessment and Remediation (EAR) license that allowed it to conduct the pilot program on one-third of the 45.3-acre site.

Richgreens has offered to sell the property – acquired in 2016 for $2 million – to the city for $14.3 million. Last month, after the extent of the environmental problems had become known, the city counter-offered $9 million. Negotiations are continuing.

Italia could not be reached for comment. An attorney at the Fort Lauderdale law firm that represented Italia when he incorporated Richgreens in 2016 –  Hackleman, Olive & Judd – did not respond to a request for comment.

Property manager Shannon Stough also did not respond to requests for comment.

The old golf course property is particularly sensitive because it is low lying. “When you look at drainage in the area it’s a bull’s-eye for where water goes,” said Broward Commissioner Beam Furr, whose district includes the property.

While Richgreens secured the EAR license, it has yet to obtain a county surface water management license. That license, applied for on Jan. 10, is needed because a layer of up to 14 inches of sludge applied to the land might “alter the natural flow and level of surface water,” according to information put out by Furr’s office last week.

Carlos Adorisio, who oversees Broward’s surface water management licensing, said Monday that “we are not granting the license at this point because the information they submitted is not sufficient.”

About two months ago, when Richgreens told the county it was going to begin spreading nonhazardous sludge at the site as part of the pilot program, county officials advised against it until the second license was secured. Nevertheless, the county had no power to stop it from proceeding, officials said.

County environmental officials recently sent Richgreens a “notice of a potential  enforcement action” while a “notice of violation is prepared for the unauthorized fill placed on the site.”