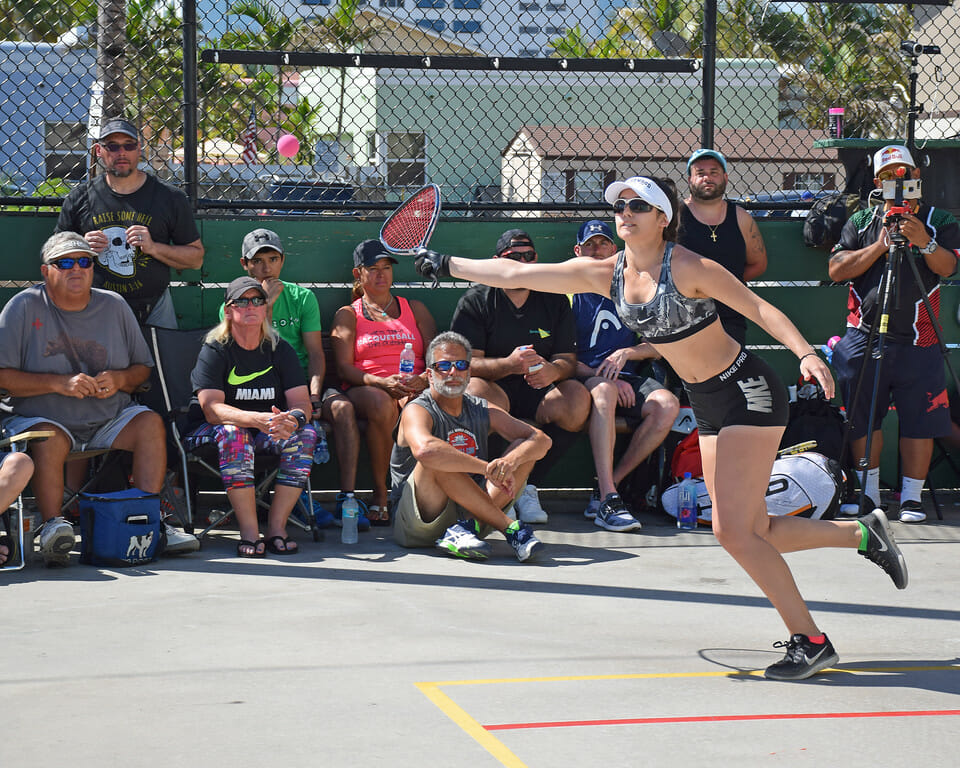 Hundreds of competitors and spectators from around the world will descend on Hollywood Beach for the 13th annual World Outdoor Racquetball Beach Bash set for March 19 – 22.

Spearheaded by World Outdoor Racquetball Hall of Famer Vic Leibofsky with an all-volunteer staff of 12, “the tournament is designed to have the maximum participation of people who come here– not to determine who’s the best player in the world, but to enjoy this beautiful beach and get out of that cold frozen up-north,” he said. “It brings a bunch of racquetball players that play indoors, in the snow, or don’t play at all during the winter.”

Leibofsky also plays in every Beach Bash, and was Men’s Open Singles champion a few years back.  In 2019, he won the Men’s Combined 100 with his partner Cliff Swain.

Over 200 people have registered to compete in both at various skill levels, while the pro division will feature some of the top-ranked players in the world.

“There are always people from at least 20 or 25 states and four or five countries,” said Leibofsky. “We get people from Alaska, from Hawaii… last year, we had guys from South America, from Mexico, from Ireland, from Australia.”

Leibofsky believes what makes this event so popular is how it brings together people who wouldn’t normally play against each other. “Indoor and outdoor and New York style are all three separate styles, except once a year at Beach Bash,” he explained.

Beach Bash Brings Out the Best of the Best

Hall of Fame racquetball players like Cliff Swain who finished as the #1 player on the International Racquetball Tour six times and Marty Hogan who won more than 100 international or national titles and six U.S. national championships during his 14-year career have been coming every year since the beginning.

And it’s not just the indoor pros who show up in Hollywood. The one-wall game has traditionally been dominated by the pros out of New York, led by Hall of Famers Robert “Iceman” Sostre (holder of over 100 professional titles in paddleball, handball and one-wall racquetball), and his partner Alfredo Ramirez, (12 consecutive undefeated years in pro/open doubles) who have won more Beach Bash Pro Doubles Championships than any other team.

The pros play for money, explained Leibofsky, while the amateur players do not, but over the years, the event has become known as the most fun tournament they play all year, and to Leibofsky, “that’s just what I’m trying for.”

Paddleball: a Gateway to Racquetball

As a teen in Hollywood, Leibofsky played paddleball, but, he said, when he went to college “I picked up Racquetball and then I never looked back. I would come back once or twice a year and play Paddle, but my sport, my passion, was racquetball.”

The main difference between Paddleball and Racquetball is the equipment — the racquets, the balls, and normally, it’s mostly played indoors, with four walls, but here outdoors, is often played with three.

“So,” he recalled, “not many people played racquetball here until 2001, when two guys named Scott Hirsch and Wally Schmidt, the guy who saved these courts at Garfield Street, decided to host a racquetball tournament here on these hallowed courts.”

“The Beach Bash wasn’t designed to have the best players in the world compete in it, but it does so by accident,” said Leibofsky .

Born in Brooklyn, Leibofsky moved to Hollywood, Florida at 13, offering his Bar Mitzvah money to help his family with the relocation costs.

Upon leaving that position, he segued into only running events, ultimately settling into running only the Hollywood Beach Bash, one of the three largest tournaments in outdoor racquetball. The others are the world championships in Huntington Beach, California, which he ran for two years, and the three-wall championships in Las Vegas, for which he’s been on the planning committee since it began in 2000.

What made his induction unique for the Hall of Fame committee, they said, was that he has done his unceasing work usually in the background, without taking credit for his significant achievements.

“It’s just my gift to the community,” he said.  “As you know, I have a real job. I am not registered as a non-profit, so I make a point to make sure I don’t make any money. Honestly, I probably kick in two or three thousand dollars a year into the racquetball, you know about half of that into my tournament the other half of that chipping in for food or prizes or helping people out with entrance fees when they need it.”

In 2018, Leibofsky was described by the WOR as “a legendary outdoor racquetball contributor who is the only person in our sport’s history to have directed all three major national outdoor championships.”

“For his continuing efforts and leadership to the outdoor game of racquetball, he was named the sport’s inaugural recipient of the Greg Sheffield Award, the highest service honor in outdoor racquetball. The inscription reads: Presented annually to the player who exhibits honor, integrity and true love for growing the game. Vic Leibofsky helped create the WORLD rankings, the WOR 1-wall rules and he integrated the R2 Sports platform into outdoor racquetball. Vic is a once in a generation leader.”

For information about the Beach Bash, contact Leibofsky via email at Vicheatfan@yahoo.com.