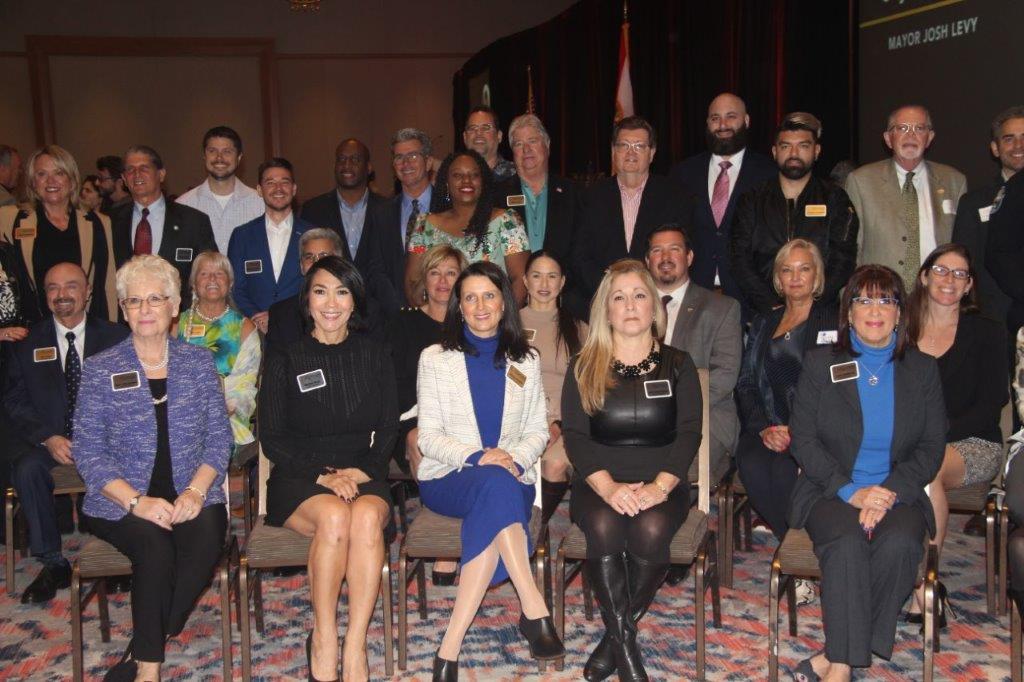 The Greater Hollywood Chamber of Commerce held its annual Business Leaders Awards and Board Installation Luncheon at the Diplomat Beach Resort last Friday.

Business leaders some with many years of success and accomplishments and others who are getting a solid start on their careers were honored. Broward Commissioner Beam Furr was the keynote speaker.

“I am excited about Hollywood and I think the city is doing very well,” said Furr. He said that Hollywood voters made a good decision by approving the General Obligation Bond. He believes the bond will pay for many needed improvements throughout the city.

The 2020 honorees included an all-star list of people who have achieved in business and the professions.

Michael Cassel, a lawyer received the Rising Star, Young Leader award. He is the managing partner and co-founder of Cassel & Cassel and an alumnus of Leadership Hollywood 43. He focuses on the representation of residential and commercial policyholders in property damage claims against their insurance companies.

Hollywood Police Chief Chris O’Brien earned the Community Service Award. He began his career with the Hollywood Police Department in 1998 and quickly rose through the ranks to major. In 2014, O’Brien held duel responsibilities as Acting Assistant Chief of Operational Bureau and in 2015 was promoted to Assistant Chief of Police. As chief his main goals for the department are to improve pubic safety, including Hollywood schools, leveraging limited funds to better equip and train the department and employee morale.

Michael Feinstein, the founder and CEO of Buro won the Community Impact Award. He is considered to be a pioneer of the shared office industry. Feinstein provides small companies and freelancers with a more stylish and flexible work environment. He set about re-imagining how a shared office space should look, feel and function. The Buro community includes more than 50 growing companies.

Luis Riquezes, JQ Group of Companies received the Business Partner Award. He has over 21 years of experience in construction with an extensive portfolio spanning the United States and Venezuela. He has managed and executed the completion of more than 35 million square feet with an approximate value of $1.5 billion.

Barbara Goldberg, the founder and CEO of O’Connell & Goldberg won Business Woman of the Year. Her public relations firm is highly regarded in Florida and has been in business for 26 years. She has led decades of memorable public relations campaigns and effective strategies for an array of top companies to keep them relevant in people’s minds.  She uses social media innovations, effective storytelling and the ability to build strategic partnerships. The agency is recognized for influencing, engaging and motivating key audiences to act.

Dr. Brijesh Mehta, a NeuroInterventional Surgeon at the Memorial Neuroscience Institute and Director of the Comprehensive Stroke Centers for the Memorial Healthcare System earned the Visionary Award. His passion and research interests are building high efficiency acute stroke processes and workflow.

Theo Xidis the owner of Medworks Painting & Finishing won the Small Business Person of the Year. He has contracts with most major hospital systems in South Florida. He does medical cabinetry work, painting and maintenance.

Barry Faske, Faske Enterprises won the Leadership Hollywood Award. He has played an active role in seeking to create a better environment for future generations in Florida. He has been an active member of the Florida Green Building Coalition for ten years.

Helen Vella-Basilone, Vella Coaching won the award for Ambassador of the Year. She has been involved I philanthropy for most of her life having been on the board of several non-profits.