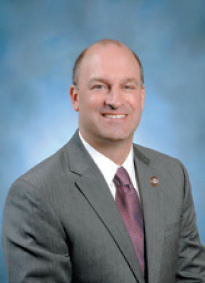 Jonathan Daniels has been selected as the new chief executive and port director of Port Everglades. The announcement was made by Broward County Administrator Bertha Henry.

“Port Everglades is a dynamic economic engine for Broward County that will benefit from Jonathan’s business and economic development expertise,” Henry said. “The search for a director who could lead our seaport into the future was exhaustive, and I am confident that we made the right choice, as demonstrated by the Commission’s confirmation of his appointment.”

Daniels comes to Port Everglades from the Port of Gulfport, Mississippi where he worked as the executive director since 2013.

“I am honored to have been selected,” Daniels said. “I look forward to working with the Board of County Commissioners, the County Administrator, the hard-working and dedicated employees of Port Everglades, and its diverse business clientele.”

In addition to his maritime experience in Gulfport, where he led a $570 million restoration and expansion project, Daniels also served as the Executive Director of the Port of Oswego in New York from 2007-2013, managing director of the Port of Greater Baton Rouge, and Port Director for the Eastport Port Authority in Maine.

Daniels also has an extensive background in economic development. He worked as the Chief Executive Officer of Eastern Maine Development Corporation, where he oversaw the day-to-day operations and development efforts of the six-county economic development district, and as the Director of the City of Bangor, Maine Office of Economic and Business Development. He also served as Senior Trade Advisor and Director of the Maine International Trade Center, which is responsible for the State of Maine’s international trade development efforts for eastern and northern Maine.

Port Everglades is currently undergoing a $1.6 billion port expansion effort and is considered a global gateway for cargo, cruise, and petroleum.