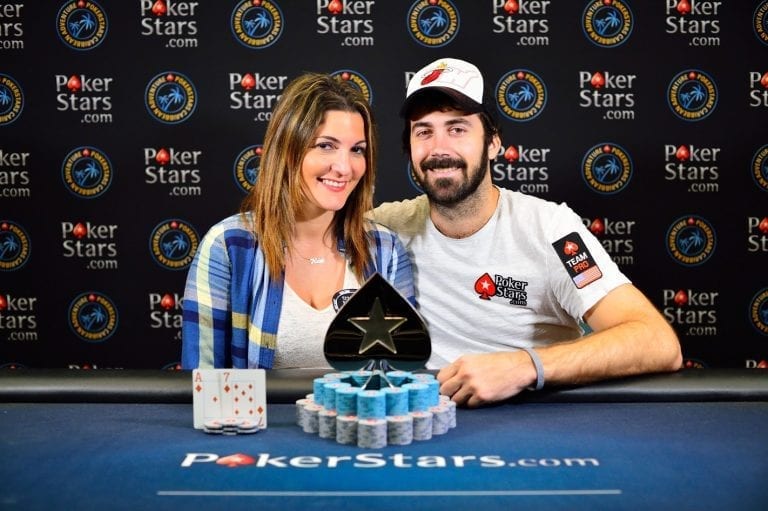 His victory also clinched him the WSOP Player of the Year title.

At 29, he’s the third-youngest player to win five career WSOP bracelets. The only two others who won five at a younger age are poker legends Phil Ivey and Phil Helmuth.

Taking a moment out of his current tournament trip in Barcelona, where he will play 6 to 8 tournaments over 12 days, Mercier shares some of his remarkable story with his South Florida home base.

Making a career of poker

“They were against gambling altogether,” shares Mercier. “They have a very conservative Christian background and I struggled for a few years until I proved that I could make a good living. When I told my dad I won $50,000 in a month, his jaw dropped!”

Mercier attended located on Stirling Road, but started playing poker at the age of 15. “I was very competitive,” he recalls.  At 18, he played at the and did well, which led to playing much more frequently online.

“I was playing everyday. It’s how I became really good at the game.”

Mercier went on to and intending to become a math teacher or a sports coach.

“I was coaching Varsity Basketball at Sheridan Hills (his alma mater). It was a fun experience, but I kept playing on Poker Stars (before it was shut down by the Department of Justice) and soon figured out I could make a living at this. I started playing 40 to 45 hours a week. Multiple tables at the same time, 12 tables at the same time. And I was making money… for real money.”

Mercier is certainly ambitious, persistent and goal-oriented. He attributes his hard work ethic and drive to his parents, who are blue collar workers still living in Hollywood. “My Dad is my biggest fan now.”

“In 2008, I played my first live tournament in the Bahamas. I didn’t do well but the following April, I went to Italy and won first place. I’ve been on the road ever since.”

In poker, luck favors the skilled…

Mercier is proficient in about 100 different forms of poker. His favorites are Pot Limit Omaha, a variation of Texas hold’em, and Open-face Chinese poker.

Early on, Mercier discovered he had a knack for numbers. “I loved playing cards with friends and always felt a good knack for games like chess, and I was good at math. I caught on to numbers very quickly. Poker was a combination of all these things: game theory, strategy and math. It was very intriguing.”

So far, Mercier has cashed in eleven times in the 2016 WSOP with two victories, a runner-up finish, and four total final tables, winning more than $900,000. To date, his total WSOP winnings measure $4.5 million, and his overall poker winnings add up to more than $17 million.

Daniel Negreanu, one of the best players and ambassadors of the game, has been someone Mercier has looked up to during his run. “We talk about the poker industry,” shares Mercier. “He’s like a mentor to me.”

Mercier met his fiancée Natasha about 5 years ago through mutual friends. The two are set to tie the knot in November.

Ready to become a married man, Mercier looks forward to some additional, professional competition from Natasha, who also just surpassed the $1 million total winnings mark as a poker player.

While his base is in Fort Lauderdale, Mercier’s parents and two of his siblings are still living in Hollywood.

What does he love most about Hollywood? The beach, the restaurant, and of course, the Poker Room at the Seminole Hard Rock Hotel and Casino.