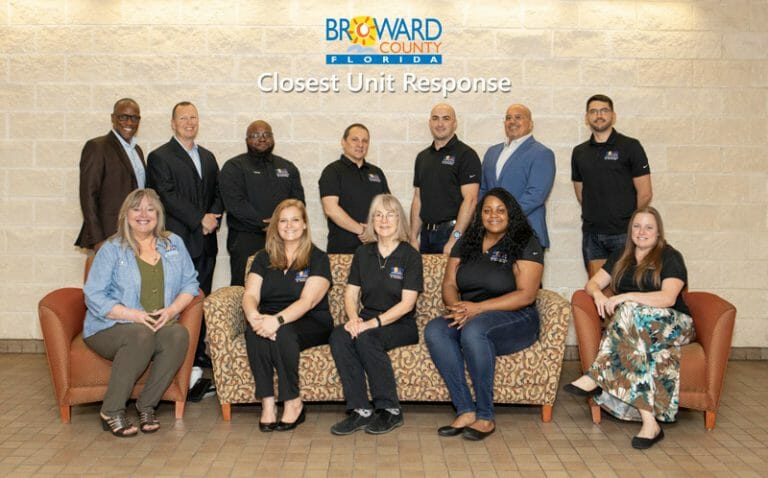 By the end of March, six municipalities will be participating

After over a decade of planning, Broward County is launching a system of “Closest Unit Response” which was first approved by county voters in 2002. Phase one of Closest Unit Response successfully rolled out on Monday, March 2, 2020 in the Cities of Sunrise and Lauderhill. That will be followed by launches in North Lauderdale, Oakland Park and Tamarac on March 16th, and Fort Lauderdale on March 30th.

In all, 87 front-line fire rescue vehicles have been equipped with new computers to support Closest Unit Response,  a primary component of the new Regional 911 system, overwhelmingly approved by voters.

The launch follows years of planning, more than $93 million in capital expenditures on the purchase and installation of new equipment and infrastructure, and thousands of hours invested in dispatcher and responder training.

“We know this will save lives. In just the first 24 hours during the system’s pilot program, two lives were saved thanks to Closest Unit Response – a victim of cardiac arrest, and an unconscious person. As we all know, minutes matter and seconds count when lives are at stake and people in crisis don’t care what patch a first responder is wearing on their uniform.”

Broward County’s new Computer Aided Dispatch (CAD) system, installed in March 2017 with an investment of $5.3 Million is at the heart of this new capability. If an equipped, capable, and available Fire Rescue unit is within two minutes of a life-threatening emergency, the CAD system uses GPS to locate and automatically dispatch that unit to that emergency, no matter the jurisdiction. If an incident requires more than one fire rescue unit, the closest unit will respond, supplemented by unit(s) from that municipality’s jurisdiction.

“Closest Unit Response means that in a life-or-death situation, dispatch will send out any equipped, capable and available fire rescue vehicle within two minutes of the emergency, even if they are from a different municipality,” said “It’s anticipated all municipalities participating in the Regional 911 system will be online by the end of 2021. We are all glad it will be in place and saving lives in Broward County.”

“This is a transformative update to our 911 Communications System.”

The Regional 911 System was consolidated in 2014 and has been growing and improving ever since, with the addition of a new Computer Aided Dispatch System in March 2017, Text to 911 in April 2019, new radio communication towers and improvements to existing towers (ongoing), the implementation of new emergency Fire (December 2018) and Police (March 2019) protocols, and now the “pièce de résistance” – Closest Unit Response.

“We are fortunate in Broward County to have a great community of professional first responders, and a great team of public safety professionals. We appreciate the efforts of those professionals and our Regional Emergency Services and Communications team, led by Tracy Jackson,” said Deputy County Administrator Monica Cepero. “Broward’s residents and visitors deserve our best, and this is another step toward that goal.”

Closest Unit Response is being launched in four phases. By the end of 2021, all municipalities that participate in the County’s Regional 911 System will be utilizing it.

City of Hollywood officials have been informed that Broward County plans to proceed with a 15-tower site Regional System. The remaining tower of the Regional System (West Hollywood) is currently under construction, and all constructed sites are concurrently being reviewed and finished.

System migration and cutover plans are in development, and stakeholder meetings are being planned to keep everyone informed of the path forward.

For the yet to be determined East Hollywood site, the city of Hollywood is in the process of talking with Broward County vendor, Motorola, to determine the cost and scope of building a tower that would be owned, operated and maintained by Hollywood, at a location of their choosing.

Hollywood’s system won’t include County-installed equipment but must meet the County’s system specifications to operate effectively and efficiently as a stand-alone site with interoperability into the Regional network.