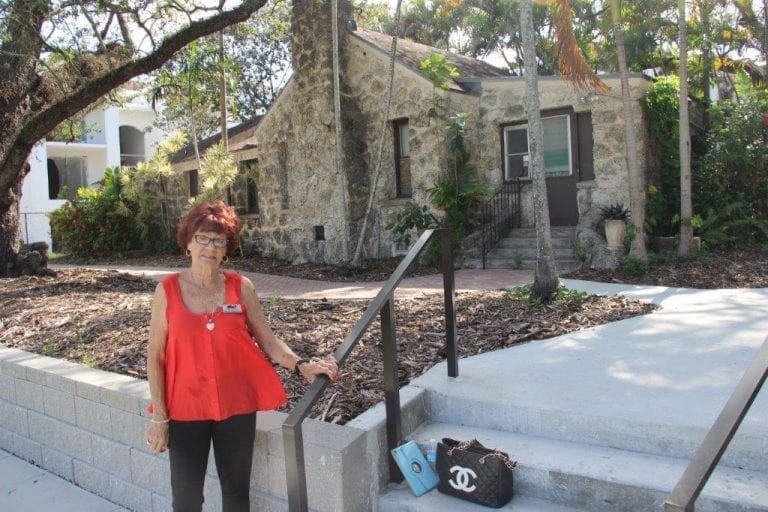 The Hollywood Commission recently passed an ordinance to amend the zoning and land development regulations to designate the Butler Rock House within Charles F. Vollman Park as an Historic Property Overlay Site.

The Butler Rock House was built in 1925, and is a one-story, approximately 2,000-square-foot, Arts and Craft broad Bungaloid style with a modified rectangular plan, gable-in-hip roof, enclosed porch and an exterior prominent gable fireplace chimney. The walls and chimney are constructed or finished in oolitic limestone. The roof has composition shingles, and the house sits on a masonry pier foundation. It is located in a hardwood hammock that is part of the 40-acre Sheridan Stationside Village development. The Butler Rock House is in good condition. It does, however, require some restoration and upkeep to reinstate its architecturally significant features.

The Butler Rock House has long been a part of Hollywood’s history. In the 1920s, the Hollywood area was undeveloped and consisted mostly of pine forests and dense undergrowth. At that time, Joseph W. Young came to South Florida to build his “Dream City in Florida,” now known as Hollywood. He created miles of roads and sidewalks, and built commercial and residential developments. Ben Butler came to Hollywood at that time as a builder to work on the Young Company Hollywood Beach Hotel. He also bought a small wood frame house on Cleveland Avenue that was built in 1925.

In 1926, the Sea Board Airline Railway came to the City. Although the first Seaboard passenger train arrived in January 1927, the station did not open until 1928, in what was then a remote part of Hollywood.

Butler bought five acres of land, moved his small wood frame house from Cleveland Avenue to the present site in 1941. He then built additions constructed of oolitic limestone encasing the original wood frame portion of the house. He became a dairy farmer as well, and in 1965 he sold his 300-acre parcel to B.L. David for $4,500. At that time, Butler and his wife, Queenie, moved into the house on Park Street owned by his son, Robert, and Robert’s wife, Mildred. Robert was given the dairy cattle and moved to Okeechobee where he established a dairy farm in Lorida, Highlands County, Fla.

In 2007, the entire 40-acre site was sold to Ram Development to develop Sheridan Stationside Village. At that time, the Broward County Historic Commission requested an archeological survey of the site prior to its development. Archaeological site models of the area had indicated that the parcel had a moderate to high probability of containing archaeological sites because of its location on a remnant oak tree island that was adjacent to a transverse glade; open space in forest. The Archaeological and Historical Conservancy Inc. conducted the cultural resource assessment survey of the Sheridan Stationside Village parcel in 2007 to locate any sites of archaeological and/or structures of historical significance.

The survey found that the 40-acre Sheridan Stationside parcel encompasses much of a remnant oak tree island, which was one of a variety of large islands that were part of the Atlantic Coastal Ridge. The southern portion of the parcel, where the Butler House is located, contains oak trees that appear to be close to 100 years old. All test holes from the survey were negative for archaeological materials. Findings, however, did determine that one historic structure was located on the survey parcel known as the Butler Rock House.

According to City of Hollywood information, the archaeological survey concluded that the structure was locally historically significant and possibly eligible for listing in the National Register of Historic Places.