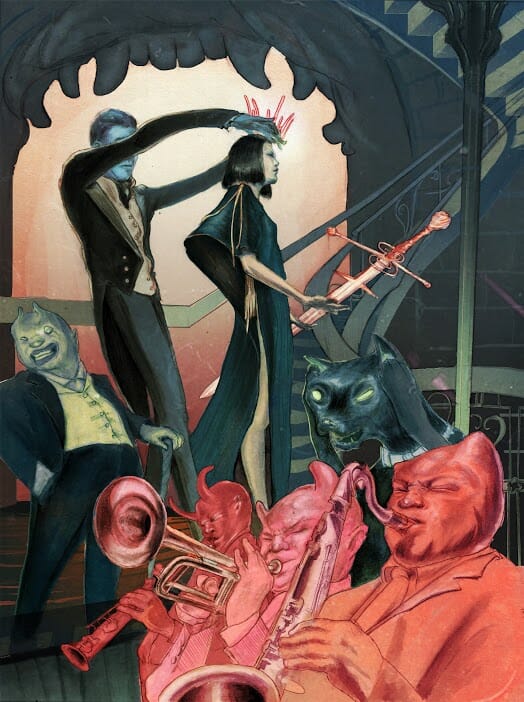 Danny Bitton, a recent graduate of the NSU University School at Nova Southeastern University,  has been named a winner in the Illustrators of the Future contest, put on by science fiction and fantasy publisher Galaxy Press.  The contest, which honors twelve illustrators and also twelve authors each year, is now in its 36th year.

As part of the prize, the winners are flown to the other Hollywood, in California, for a week-long professional workshop and awards event, which was originally set to be held in early April. In addition, some of the winning pieces will be published in the company’s annual anthology, which has made bestseller lists numerous times in past years.

“I’m looking forward to the workshop,” said Bitton.  “I have been to a similar one run by industry professionals, the Illustration Academy in Kansas City, where we had the chance to work directly with our favorite artists and mentors.  We learned a lot about the business side of the industry, and it was a great networking opportunity.”

Bitton has been drawing for as long as he can remember.  He grew up in Davie before his family moved to Hollywood, where they own a screenprinting business.

As a child, he helped out in the warehouse and eventually, as his skills developed, he was able to contribute some of his designs to the business as well.  He received a BFA in illustration from the Maryland Institute College of Art in 2019 and attended The Illustration Academy in Kansas City in the summer of 2018.

He loves to depict fantastic characters and tell stories through his illustrations, which are inspired by dreams, myths, and history. Through a mix of layered digital and traditional media, Bitton’s work primarily focuses on themes of dark fantasy with historical allegories for book covers, usually for a Young Adult audience.

The highlight of the awards ceremony in April will be the announcement of the year’s two Grand Prize winners, who will each receive $5,000. Quarterly winners also receive cash prizes from $1,000 to $500, along with publication in the annual anthology.

Celebrities, best-selling authors and famous artists in the genre will be on hand at the gala and the workshop honoring the winners.  Among them are Kevin J. Anderson (Dune prequel series), Orson Scott Card (Ender’s Game), Eric Flint (1632), Larry Niven (Ringworld), Tim Powers (On Stranger Tides, on which Pirates of the Caribbean IV was based), Brandon Sanderson (Mistborn series, Stormlight Archive) and Robert J. Sawyer, referred to as Canada’s Dean of Science Fiction.  Award-winning artists expected include Bob Eggleton (11 Chesley Awards and 7 Hugo Awards), Larry Elmore (Dungeons & Dragons book covers), Rob Prior (art for Spawn, Heavy Metal comics and Buffy the Vampire Slayer), and Ciruelo (Eragon Coloring Book), who will all serve as presenters.

Throughout the contests’ 36-year history, over 774 writers and illustrators have been recognized as winners. “What’s amazing to me is that a good 60 to 70% of winners go on to successful careers,” says New York Times’ best-selling author Anderson. “You could call it ‘The American Idol’ for writers—long before there ever was such a show.”

The intensive mentoring process has proven very successful. The 428 past winners of the Writing Contest have published 1,150 novels and nearly 4,500 short stories. They have produced 32 New York Times bestsellers and their works have sold over 60 million copies.

The 358 past winners of the Illustrating Contest have produced over 6,000 illustrations, 360 comic books, graced 624 books and albums with their art and visually contributed to 68 TV shows and 40 major movies.

Bitton currently lives in Philadelphia doing commission art and design work while pursuing a full-time career in illustration.  He applied for the contest in his senior year of college in the hopes of receiving some scholarship money, and is of course excited to be named a winner.

“It’s nice seeing how much they give to people in this genre,” he commented.

To see more of his art, visit https://www.danielbittonart.com or contact him at dannybittonart@gmail.com