Hollywood History: The Early Days of Leadership Hollywood — 44 Year of Creating the City’s Movers and Shakers 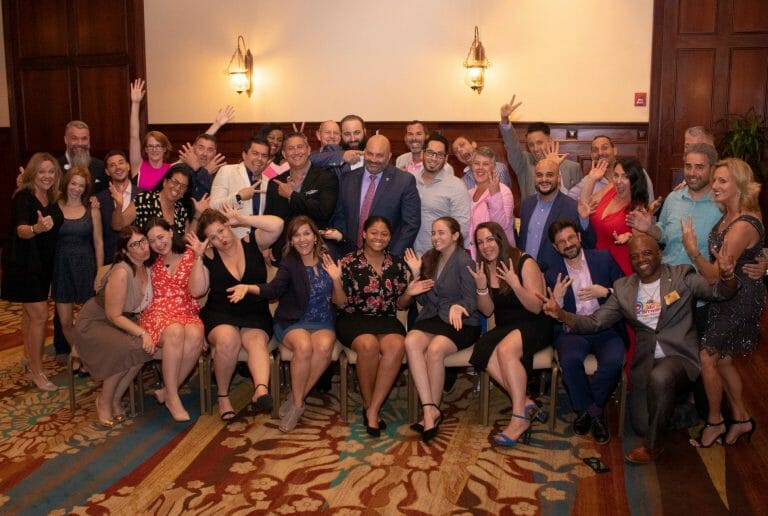 Blattner, who was in Leadership very early on — “I know it was in the single digits, Leadership Six or Seven!” he joked — recalled the fledgling days of the program.

“I remember that in terms of process and procedure we would meet and get a lecture, usually from someone in the Chamber, but I wanted to get out into the streets and see what was going on,” recalled Blattner.  “Well, I probably mouthed off about it, and the leader said ‘well, if you don’t like it, come up with something different’.”

That was the beginning of the field trips and different outside speakers, instead of chamber staff acting as teachers. “We would go out and have judicial day, and spend time in courts, or go to a jail or visit a hospital to have a program, or sit in on a commission meeting or play the role of a commissioner.”

The Community Projects soon followed, and have become one of the most meaningful pieces of the program.

“The projects are one of the things I enjoyed the most,” said Blattner  “In my first year, we planted mangroves in West Lake Park, to supplement nature. We destroyed our tennis shoes, waded through the muck, and then had a pizza party to decompress.  (Broward County Judge) Ken Gottlieb spearheaded that project. We had a great time. We always had fun.

“Hollywood was growing very rapidly, and the older ‘founder’ generation was retiring;  some of the people needed to be replaced,” he recalled. “That was maybe why they decided to use the Chamber as the vehicle to develop new leadership.”

Blattner ran the program for several years until Casey took it over, and it has operated basically the same way ever since.  Except, quipped Casey, in 1994, he changed the class names to Roman numerals, saying he thought it sounded more majestic.

“Leadership Hollywood introduced the community to me, and me to the community,” said Casey.  “Through this program, I got to know my city so much better – its beauty, its ugly, and its everything in between.  Leadership Hollywood proselytizes proudly about the many great aspects of our community, but also pulls no punches about the challenges we face and the need to address them.

“Leadership Hollywood takes people who merely live and work in Hollywood and enables them to become real citizens of and for Hollywood.  It was a great experience, packed with info I would never have found anywhere else, and a network of people that I would never have met, in the city I had lived in for a very long time.”

“Leadership Hollywood gave me a great deal of knowledge, understanding and direction,” he declared.

Indeed it does, said Bob Giacin, who actually helped build Hollywood when he later served as Chairman of the South Broward Park District and was instrumental in creating TY Park and CB Smith Park in Pembroke Pines.  And, although Leadership Hollywood was formed originally to create new, qualified people to run the city, it also helped the Hollywood Chamber of Commerce figure out how best to support the community.

John Primeau, executive vice president of Centennial Bank, and a high-ranking official of several other banks before that, was also a member of the first Leadership Hollywood Class.  He recollected:

“It was a good time for Hollywood. The City was really starting to come up, between Miami and Fort Lauderdale.

“In the first class, we were sitting around, saying ‘what are we starting to do here?’  It was still a new concept. No one else had it, that I recall.

“So, besides preparing people to run the city, and to be part of the Chamber, we were also thinking about what direction the Chamber wanted to go.  Hollywood was growing and we talked about things from what are they doing with Young Circle to what are really the responsibilities and goals of a Chamber and how can we help the community and the people.

“And it was really a joining thing.  We had a lot of projects but the Chamber didn’t have a lot of funds, so we got people involved.

Our job was to qualify people to guide the City and to guide the Chamber, to create leaders, and to help figure out what the city needed and how we could provide it.

“I also became very involved with charities, and made relationships that lasted forever.”

For his Leadership One classmate Nicki Grossman, Leadership Hollywood was the thing that made her future path clear.

“Honestly, I remember every one of the speakers,” she said.  “I became interested in the Chamber, and I later became CEO. I learned about Port Everglades, county government, city government, all the different departments, met the people that really run the city, that do the work, get the job done.  I got a real hankering for helping to run the city that I lived in.

“And one of things that was so exciting about being the first class was getting the understanding that this will be a city that must be responsive to the residents now, but with an eye open to the future.  A year later, when I was elected to the city commission, I knew from what I had learned how important it was to find the projects that the people would be willing to fund, which ultimately we did.”

In the old days, said Bob Giacin, “one of the neat things that we used to do was to take one of the guys’ little planes and fly the local candidates to Tallahassee for the day.”   It was, he said, a good stepping stone to what we have today, and a way to have more informed people running for office.

And while he believes that there is always room for Leadership Hollywood, like anything, to evolve and grow, he remains quite proud of the program, and the leaders, he helped to create.

For more information on Leadership Hollywood, visit https://hollywoodchamber.org/leadership-hollywood/# or call Marie Suarez at the Hollywood Chamber on 954.923.4000