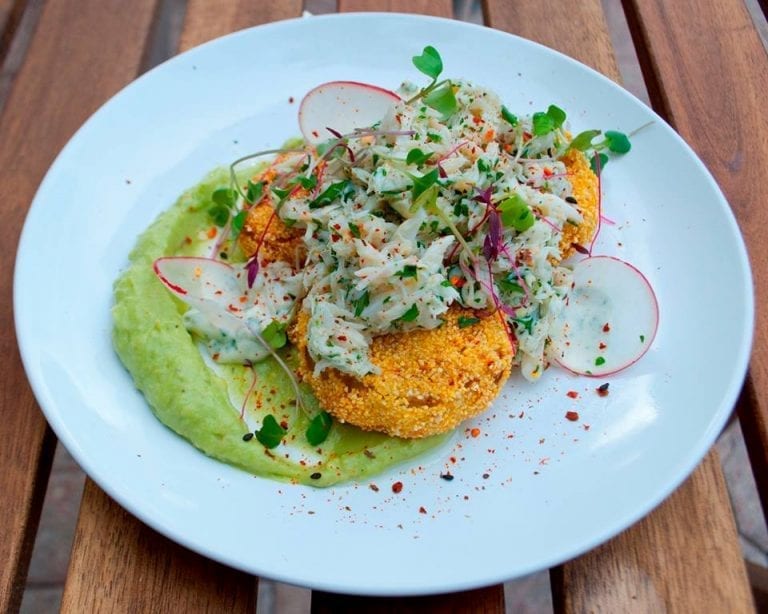 Acclaimed South Florida food truck chef Kevin Dreifuss traded in his wheels for a stationary restaurant with the recent opening of Ends Meat Eatery, a hip bistro in Downtown Hollywood inspired by the evolution and combination of Northern California and South Florida cuisine.

Since Ends Meat opened March 20 at 1910 Hollywood Blvd., diners have been raving about the exceptional food, wine, atmosphere and service at the new gastropub, which serves up trendy yet casual lunches, inventive seasonal dinner menus, craft beers and an impressive wine list.

“The reviews have been great. Everybody’s been really happy with the menu items and wine list,” said Dreifuss, a chef for the past 20 years who owns Ends Meat Eatery with his wife Georgianna.

After serving as a chef at several restaurants around the country, Dreifuss owned and operated the Pescados Unidos food truck for two and a half years, during which time he participated in the popular Food Trucks at ArtsPark event held Mondays in Downtown Hollywood. Pescados Unidos was renowned for its fresh Latin-inspired seafood, and Dreifuss’ popular Fish Sausage was one of the featured dishes at the 2013 Food Network South Beach Wine & Food Festival’s Trucks on Midtown’s Tracks.

Dreifuss’ new venture, Ends Meat Eatery, occupies a 1,100-square-foot space accented by an assortment of table and floor lamps hanging upside down from the ceiling, and a 24-foot bar covered in pennies that the couple spent three days gluing in place.

“The décor is eclectic. It’s very cool,” Dreifuss said. “It’s not like your cookie-cutter restaurant, by any means.”

Like the ambiance, Ends Meat’s brunch, lunch and dinner menus, which change every month, are extremely creative. Brunch, served on Saturday and Sunday, features selections such as The Benedict (fried green tomato, poached egg, lump crabmeat and sauce Béarnaise) and The Savory (smoked pork belly, blackened shrimp, grits and Vermont cheddar), as well as a variety of add-ons like Duck Fat Potatoes or Spanikopita.

Raw oysters, half-shell clams and seasonal ceviche are served with apple mignonette and house cocktail sauce at lunch and dinner. Desserts include a variety of seasonal pies and cakes.

Dreifuss, who has lived in Hollywood with his wife and two children for three years, was drawn to the eclectic historic downtown arts, music and entertainment district when it came time to choose a location for his new restaurant.

“Downtown Hollywood’s got a lot of character.  There has been a lot of new investment in the area and more young professionals live in Downtown and the surrounding neighborhoods” he said. “And I like the fact that it’s historical.  The historical aspect also attracts a lot of tourists that are staying on the beach.”

For more information, call 954-391-7400 or visit www.EndsMeat.com. Orders can be placed online for pickup or delivery. Catering services are also available.