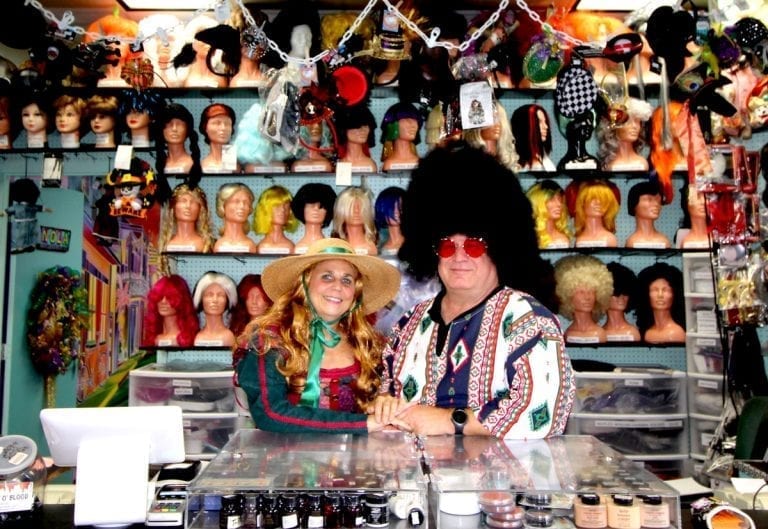 Her office is decorated in a purple New Orleans Mardi Gras theme, and his is filled with Beatles memorabilia. She takes French and modern dance lessons, and he studies the ukulele. They share a love of travel and do so whenever they can. She does most of the design, buying and merchandising in the store, and he’s the numbers guy, who also buys make-up, masks and boas (the scarves, not the snakes).

Who are these people?

Strangely enough, the thing the Rapps hear most from walk-in customers is “I’ve been living in the area for many years, I’ve seen you here forever, but I never came in,” and “Now that I know you, I’ll definitely be back!” said Indee, whose mother started the business 43 years ago. “And that’s our greatest joy,” she added, “When people come back with friends and family.” Once there, almost everyone becomes enchanted with the old-school set up and the wide selection of unique costumes for men, women and children.

Indee and Lenny met three times when they were in different middle schools in south Florida before they realized that they’d found their soul mates. When Lenny’s family moved to Texas, they had regular “long-distance” phone calls and when it came time for college, Indee enrolled in school there so they could be together. When Lenny’s family moved back to Florida, the young couple stayed on and married, and with the birth of their first child Jason, they returned to Florida and their families. Indee took jobs in property management and advertising sales, and Lenny worked as a tax accountant. Soon after, their daughter Scarlett was born.

Meanwhile, Indee’s mother, Barbara, an extremely talented seamstress, had built a small business sewing pageant gowns and costumes for local schools and dance groups. By 1974, she had opened a storefront location at 5723 Hollywood Blvd., and soon noticed an ongoing demand for more generic costumes. In 1991, Barbara helped her daughter set up a retail costume shop in Lauderhill, and in 1996, Lenny joined the business at the Hollywood location, turning it too into a retail space. The entire enterprise was renamed Masquerade Costumes.

In 2001, the Hollywood store moved to its current location at 5801 Hollywood Blvd.  The building itself has a quirky history, having served over the years as a home, a spiritual center, a warehouse, an optical shop, a restaurant, a fabric store and a funeral home. In 2013, after 22 years in business in Lauderhill, the store was merged into the Hollywood location. Lenny and Indee run the place together and look forward to another Halloween, the 43rd consecutive year of the family business.

“I didn’t inherit my mother’s amazing sewing talents,” said Indee, “but I did get her love of costumes.”

Today, the business thrives as one of the very few year ‘round costume stores in south Florida, and the only one in Hollywood.

The Renaissance Festival is always a huge draw – Masquerade carries a huge collection of skirts, corsettes and Steam Punk accessories — as are Mardi Gras parties, Masquerade Balls and the frequent ‘20s, ‘60s and ‘70s parties 3-inch platform shoes for men and small to HUGE afro wigs which would make any old hippie or disco star proud.

Kids always need costumes for plays, careers days and heritage days and teachers for presentations. People come in for costumes and wigs for comic, anime and cosplay conventions. In addition, many city and county agencies use Masquerade to fulfill their costuming needs for local events.

“We also get a lot of people buying costumes for cruises, when frequently they have theme nights, plus we work with a lot of amateur and professional theatre groups, who often take advantage of our rental costumes, which are generally made more like real clothes, with richer fabrics and more ornate trims,” noted Indee.

But it’s Halloween, of course, which remains the core business at Masquerade Costumes. The rush begins as early as August for ideas and begins in earnest by late September. The store carries a full range of costumes for newborns to plus and XXL sizes.

Customers always praise the knowledgeable and friendly staff at Masquerade Costumes. Everyone on staff has been working for the store for years, knows the stock, and works closely with the customers to help them find a costume that makes them feel fabulous.

“Nothing makes me happier than to help a customer find their “inner Halloweenie,” said Robin, a salesperson who has worked with the Rapps for the past seven Halloweens and during busy periods in between. “We laugh a lot and have so much fun in the store that it hardly feels like a job…except for those last few days before Halloween; then it sometimes feels like work!”

“We suggest that people start buying in early October,” said Indee, “because that’s probably when we have the highest level of inventory.” This is especially true for people who wear extra small and extra large sizes, which tend to sell out quickly.

But alas, most people wait till the last minute, when the store has, even with extended hours and extra staff on hand, lines out the door.

Coming in person — far in advance of need — and trying on remains the best way to buy any costume, said Indee. “We get so many people who tell us that they bought a costume on line, and that when it finally arrived, it didn’t fit,” she proclaimed. “Then they come here, and it’s often already late in the season.”

Masquerade Costume encourages customers to try on their costumes and again, to come early for the best selection and fit. The store’s personalized customer service helps to make customers’ decisions much easier and more fun.

In addition to packaged costumes, Masquerade Costumes carries an unrivaled collection of accessories — wigs, hats, jewelry, shoes, theatrical make-up, masks, fake facial hair and various unique pieces that can complete any look. Plus, they have an extensive selection of theatre-quality rental costumes, with a strong emphasis on historical era pieces. Made from better fabrics and more like theatrical costumes or real clothing, the rental costumes can also be purchased if desired.

One of the perks of the costume business, noted Lenny, is the ability to predict the outcome of elections. “Last year, we sold one more Trump mask than Hillary mask,” he said. “And see, the results were just that close!”

This year, the Rapps took on their newest identity: Grandparents! The couple are hopeful that Carter, the newly born son of daughter Scarlett and her husband Chris, will one day become the fourth generation costume store owner in the family. At the same time, their son Jason just became engaged to Nguyen, a lovely woman he met while teaching English in Southeast Asia.

While sorting a huge shipment of wigs, Indee wonders what to dress her new grandson in for his first Halloween, while Lenny figures out how he’ll get his daughter away from her baby and into the store for the Halloween rush this year.

Clearly, it’s the Rapps’ love of costumes that makes Masquerade Costumes one of the best places to shop for Halloween and any other costuming needs throughout the year. Lenny and Indee really live and breathe the costume industry all the year through. Between buying trips, special events and using the down times to organize the warren of rooms behind the main shop, it’s clearly their focus all year long. And it shows, for anyone who enters the store, definitely returns.

Find your inner Halloweenie at Masquerade Costumes, at 5801 Hollywood Boulevard, one traffic light east of 441, directly across Hollywood from the new Walmart. Call 954 322 MASK (6275) for holiday hours.