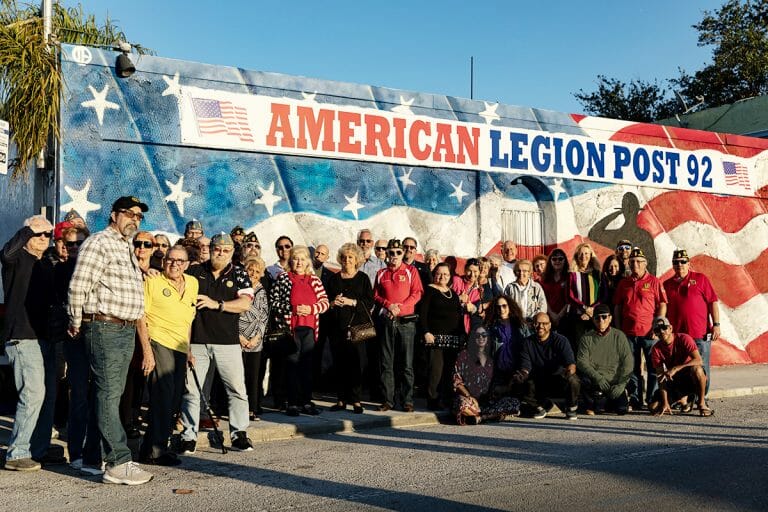 The award-winning Downtown Hollywood Mural Project’s latest outdoor art installation holds a special significance for both the artist who created it and those who occupy the building it adorns.

The 60-by-20-foot mural, which depicts a waving American flag with a soldier proudly saluting, fittingly covers the main façade of the American Legion Post 92 building at 211 N. 21st Ave. The artist, Joel Blenz, is a Navy veteran.

Blenz’s mural — the latest large-scale work of art completed through the Downtown Hollywood Mural Project (DHMP) — was unveiled Feb. 28 at a public celebration at the American Legion.

Blenz crafted the mural with wire, metal and paint to create a 3-D illusion of a real flag.

“As a Navy veteran, I think the idea of a realistic flag is symbolically powerful to show allegiance and strength for the U.S.,” said Blenz, a Queens, N.Y., native who served as a Navy aviation technician for six years out of high school.

After many years working in the banking industry, he quit to pursue a passion for art that he’d had since the age of 6.

“When you do what you love, what’s better than that?” Blenz said.

A self-taught artist, he began his career as a graffiti writer close to 40 years ago and transitioned to studio work about 10 years ago. While Blenz has created 40 to 50 murals, the patriotic piece presented unique challenges because of the construction aspect, which required a staple gun and concrete staples to affix the wire and metal.

“That’s what makes it fun,” Blenz said. “It’s challenging. We’re taking our work to another level.”

He was assisted in the project by his wife Alice Mizrachi, an artist who worked on another Downtown Hollywood mural — assisted by Blenz — in 2018.

Blenz and Mizrachi said the members of American Legion Post 92 have been very welcoming and are excited about the new mural.​

“Joel knows what it’s like to serve his country. They treat him like their brother,” Mizrachi said. “It’s a beautiful thing.”

“Everyone just wanted to find a way to help,” he said.

Including Blenz’s work, the Downtown Hollywood Mural Project now boasts 26 outdoor murals. Launched in August 2012 by the CRA, the mission of the DHMP is to beautify and add culture to the downtown area one wall at a time, transforming ordinary building façades into stunning works of art. To learn more, visit DowntownHollywoodMuralProject.org.