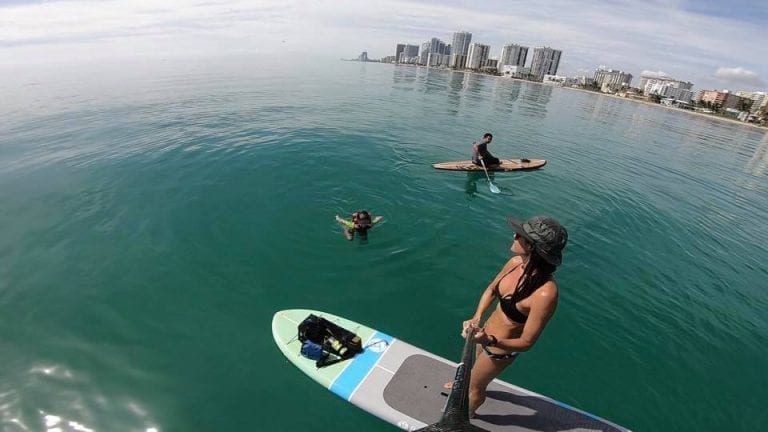 ** This story has been updated to clarify: the city’s proposed pilot program has not officially launched and is only under consideration.

Stand up paddle boarding has become a popular activity in the past decade, and those who enjoy it, like Cat Uden, have been making waves about being denied access to launch and paddle on Hollywood Beach for months.

Following some discussion at a recent commission meeting, the City of Hollywood has agreed to consider a pilot program that will add two additional launch zones for stand up paddle boarders — one at Nevada Street and the other at Harrison Street.

But Uden says the proposed pilot program gives stand up paddlers only two tiny launch spots (Nevada and Harrison) on the Broadwalk, “and we’ll have to stay a ridiculous distance from shore.” The two new spots in the pilot proposed by the city are for launch and landing only– requiring them to paddle “in a straight line” until they’re at least 100 yards offshore, moving them closer to boats and jet skis.

Below (right) is the proposal to open up space for paddle boards on Hollywood Beach from the Broward Chapter of the Surfrider Foundation.

“Originally, my main issue was that I had to launch at unsafe areas by myself,” adds Uden. “Now I am fighting for the entire stand up paddle community, including paddlers who live at buildings on Hollywood Beach and are denied access to the ocean.”

In total, Hollywood Beach has about 24,300 feet of space, and only 2,200 feet of that space can be used for stand up paddleboarding.

“The city is proposing a launch spot 10 blocks from my friend’s building, forcing her to load boards on her roof, drive 10 blocks, pay to park, and unload her boards just to be able to paddle at her own beach,” said Uden.

Uden calls into question the logic behind the city’s decision making.

“We’ve not been presented with any data that justifies the city’s fear of stand up paddlers. In addition, Hollywood has always allowed swimmers in our “surf” paddle zone, and never clears them from the water when we paddle,” she said. “Yet, I have never heard of an accident between a stand-up paddler and swimmer. So, basically we have had a pilot program for the past 20 years, and there is no data presented that shows a danger to swimmers,” noting that most paddlers are only going to be out there if it’s ‘like a lake.’

“I got a $50 ticket from the police for paddling in at the wrong spot on an empty beach by an empty ocean,” said Uden. “The ticket says ‘landing a boat.'”

Under current city regulations, surfing is permitted from Franklin to Meade Streets and Georgia Street to Azalea Terrace. Other areas of the beach may be designated for surfing at the discretion of the fire chief and his or her designee. Such areas are currently designated by the appropriate black flag being posted in the area.

The launching of non-motorized vessels is permitted between Meade Street and Custer Street, between Bougainvillea and Azalea Terrace and eastward of the beach access walkway south of 3101 South Ocean Drive and north of 3505 South Ocean Drive.

“I don’t just ‘go to another beach’ because I live less than a mile from the beach and I have an annual resident sticker that allows me to park at my beach all year,” explains Uden. “It would be expensive to go to another city and pay to park every morning.”

Uden has offered to take the commissioners out for a paddle to celebrate an ordinance change. She’ll even supply the boards!

“Hollywood Fire Rescue and Beach Safety has been assessing the restrictions other local municipalities have on paddle boarding in an effort to update our rules and create additional access points while ensuring the safety of all on the beach, in and on the water.” says Joann Hussey, Communications Manager with the City.

“The City Commission will be considering the paddle board issue and the possibility of a pilot program at an upcoming Regular City Commission meeting. It’s the best place to for the public to have a chance to hear all the facts, have an opportunity to voice their concerns and offer their suggestions.”

Commissioner Caryl Shuham said the regulations are old and may need to be updated. She respects the concerns of Hollywood Beach Safety on stand up paddle boarding but believes there could more launch areas. “I think we could have more access than we do and that the two proposed locations would expand access for stand up paddle boarders further,” said Shuham.

Mayor Josh Levy said he believes stand up paddle boarding is a good activity and one that the City should seek to accommodate. He believes that greater access to the beach could be allowed during times such as the early morning hours when there are few swimmers on the beach. “The City is looking to update the beach recreation ordinance to allow greater access to the beach for stand up paddle boarders.”