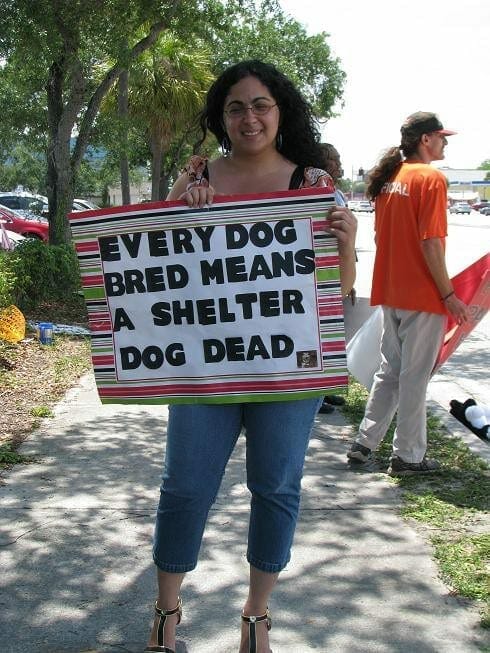 Local animal activists let their voices be heard at a recent Hollywood Commission meeting to urge prohibition of the sale of so-called “puppy mill” dogs in retail pet stores in Hollywood, and switch to a humane business model.

This is a first reading to move an ordinance forward, specifically targeting Hollywood’s Puppy Palace, which has been regularly protested and involved in lawsuits for well over a decade.

Judy Norford, the store’s owner, believes the business has a right to sell the puppies. “We believe as an American you should have the choice of where you can adopt or buy a pet,” Norford said.

“We have worked with most of our breeders for decades. I have personally visited where our puppies come from. My requirements are even more stringent than the USDA. It’s important to me how our puppies are socialized from birth, they receive quality food and are given all necessary vaccines. ”

If an ordinance passes, Hollywood would be following a nationwide trend.  To date, there are about 130 municipalities who have passed ordinances with 45 in Florida, in an effort to shut down puppy mills.  Instead of selling dogs, ‘puppy-friendly’ pet stores have shifted their business model and offer adoptable shelter animals.

Problems with Puppy Palace are not new. Protests outside the pet shop, dozens of lawsuits, scathing online reviews and Better Business Bureau filings have all accused the owner of selling sick puppies and buying them from puppy mills. Last year, a dog with a rare congenital condition, purchased from the Hollywood pet store, was reported by Local 10 News.

But not all customers have had complaints.  Shani Brenner has been a loyal customer since 1996. “I’ve gotten three puppies from Puppy Palace,” said said. “Puppy Palace has been wonderful to my family over the years.”

Hallandale Beach City Commissioner Michele Lazarow purchased her puppy from Puppy Palace in 2004. He was chronically ill for 10 years before he died in 2014.

Lazarow is now part of a movement in the United States and Canada to ban the sale of commercially bred dogs and cats.  The ban would not prohibit the sale of dogs and cats that have been rescued.  Last month, she made a presentation at the request of Commissioner Dick Blattner at a Hollywood Commission meeting to educate them on problems involving the industry.

“In respect of the democratic process I want this on the agenda so all sides can weigh in. We welcome anyone who wants to discuss the issue,” Lazarow said.

Norford has stated that she only buys only from selected breeders that she inspects personally.  “We don’t take dogs from puppy mills,” she declared in a Sun-Sentinel interview.

However, her ex-husband Steve Kruse, is a notorious large-scale breeder and the owner of StoneHenge Kennels in Iowa since 1986.  Prior to StoneHenge, he operated one of the biggest hog farms in the southeastern part of the state.

In a phone conversation in August of 2004, Kruse told a correspondent from the Companion Animal Protection Society (CAPS) that “a gal”, whom he later admitted is his wife, owns a pet store in Florida he sells to. He added that she drives up from Florida to pick up puppies in Illinois, Iowa, Arkansas and Missouri before going back to Florida.

Often, pet store owners will assure prospective buyers all of their puppies come from “USDA-inspected facilities.” But being USDA or government-inspected does not mean that the business is not a puppy mill, any more than a driver’s license guarantees a good driver.  In 2010, The Office of Inspector General released a report criticizing USDA’s history of oversight of dog dealers under the Animal Welfare Act.

Represented by lobbyist David Scott until January 2016, Kruse had not received one violation until the USDA inspector was replaced in January 2015. The new inspector found multiple violations on his first and second inspection.

In July 2015, the new USDA inspector, accompanied by an Iowa state trooper, found no fewer than 13 dogs with visible veterinary issues at Stonehenge Kennels, including some with open, bleeding wounds. Two subsequent inspections uncovered even more veterinary issues at the facility, according to the Humane Society of the United States.

On January 12, the USDA cracked down and suspended StoneHenge’s B license, which allows it to sell its puppies and (also re-sell others’ puppies) to pet stores and labs across the country, but only for 21 days. Despite violations uncovered during investigations by CAPS and dozens of complaints on RipOffReport.com, Norford defends their reputation. “Puppy Palace has worked with StoneHenge Kennels and Steve Kruse continuously for over a decade,” she said in an email to Hollywood Gazette. “I find the organization and Mr. Kruse to be of the highest integrity. Although this facility was found to have minor violations stemming from a July 2015 review, the February 2016 follow-up review of the facility disposed of all findings.

A long history of protests

Puppy Palace owner’s son, Mitchell Sunderland, describes his view from the “doggy dynasty” he grew up in. “Every few years, obese vegans living off welfare picket our flagship store in Hollywood, Florida,” he wrote. “Because they read articles online claiming we buy from puppy mills and execute the dogs that don’t sell—which is bizarre considering, as Mom likes to say, “Cute puppies are monaaay! Why would we kill something we could sell?””

Sunderland goes on to boast about the tactics espoused by the family to antagonize the activists. “Dad asked me to find friends willing to counter-protest PETA for cash and I was able to find about ten teens who would wave signs for drug money,” he writes in a screed against the protesters who regularly picket Puppy Palace.

“I really wish all of us who endured the protests outside of Puppy Palace show up Wednesday,” urged Hollywood animal advocate Ana Campos.  “If no one shows up, Puppy Palace wins. After the corruption behind interfering with the protests we all owe her a visit. You get two minutes to speak and speak your truth. People need to show up.”

Norford wants the community to know that “Puppy Palace has been a proud part of this community for more than 30 years.”  They have rescued animals from the streets, abandoned by their owners and “have even gone to Miami Dade/Broward County Animal Services to save some.”  Recently they donated a puppy to a child with autism whose family was unable to afford it. “The child barely spoke to anyone before he received his puppy, said Norford. “The best outcome was that he was speaking full sentences within two days.”

The ordinance will come before the Commission for a second reading probably in May but a date has not been set. The Commission does not want pets being sold in Hollywood from large commercial breeders.

Both sides continue urging supporters to come out and speak up. If you can’t attend, you can e-mail your mayor and commissioners.

“Although I feel that the hearts of the proponents are in the right place, moving this ordinance forward will not have the stated effects that they hope to achieve,” said Norford. “However, I will go on to state that I hope that the proponents of this ordinance elect to meet with me, so that we can all work together on improving the treatment of animals throughout the world and if appropriate, a compromise ordinance providing further comfort that pets coming into our community for purchase, are well cared for.”