The Story of Sam Horvitz, the Second Father of Florida’s Hollywood 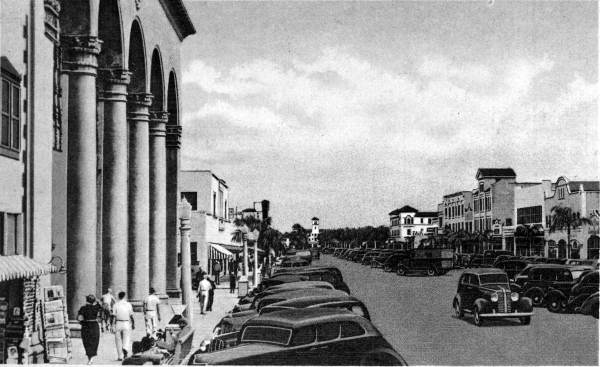 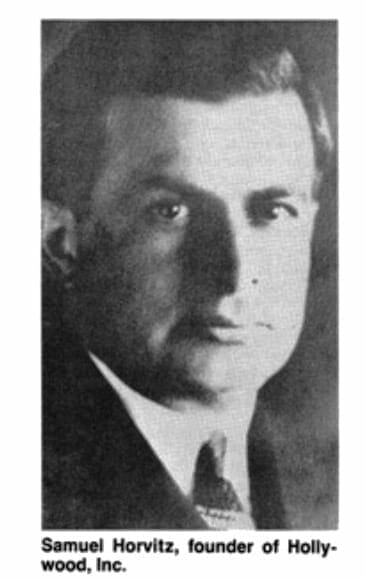 Most people know of Joseph Young, the man who rightfully gets credit for being the founder, developer, and master promoter of Hollywood. But in reality, he wasn’t the only one who built our beautiful city. There was actually another man who picked up where Young left off.

Those interested in the City of Hollywood’s history, may have heard of the company called Hollywood, Inc.  Many confuse it with Young’s Hollywood Land & Water Company, but it was an entirely different entity owned by Ohio native Sam Horvitz, the other very important developer of Hollywood.

Horvitz doesn’t have the same name recognition or the respect that our original founding father gets, but maybe it’s time to re-examine his role in the fulfillment and completion of Joe Young’s original “Dream City”.

According to the Jewish Virtual Library, (Copyright American-Israeli Cooperative Enterprise – Reprinted with permission), “No family was more influential in the development of the City of Hollywood than the Horvitzes through their Hollywood Inc. In the 1920s, Sam Horvitz entered into a contract to build sidewalks and streets for Hollywood, and with the bust he ended up controlling more than half the vacant land in the city. With nearly 25,000 lots, Horvitz began building and selling single-family homes; after World War II, he introduced the first planned residential community, then Hollywood Mall, considered at the time of its opening in the 1970s as a prototypal mall.”

Joseph Young arrived in South Florida in 1920, and soon started buying property in what would become Hollywood-by-the-Sea. The by-the-Sea phrase always followed the name Hollywood in any promotional publication that was being used during the ‘20s and into the ‘30s.

This was done to prevent any confusion with Hollywood, California, which at that time was not the movie capital of the world- it was merely a subdivision in Los Angeles County, and Joseph Young liked the name.

I do too, especially when it‘s followed with “by-the-Sea”.

(In fact, the original Hollywood, California was called “HollywoodLand”. Joseph Young had developments in Long Beach before coming to Florida, and brought the name along with him.)

Young had big plans for this section of South Florida and got to work building one of the most exciting new developments the early pioneering residents had ever seen. The population quickly rose from five families in 1920 to 18,000 by 1924, swelling to 30,000 during the winter tourist season!

In practically no time, there were two major hotels in downtown, a beautiful railroad station, a world class golf course and country club, a bascule drawbridge to the beach, and the “Hollywood Beach Hotel”, one of the largest hotels in the country. At the time, Hollywood Boulevard was the widest paved street in Florida. Many other streets and sidewalks were wide and welcoming. Hollywood had a 10-acre circle park at the center of the city, broad public access to the ocean via the “Broadwalk” (the only one in Florida) and public access to the waterways of North and South Lakes.

But by 1925 some cracks were starting to appear in the real estate and stock market boom.

The rapidly rising values of property and stocks combined with easily available bank loans created an unsustainable economic environment. (Gee, that sounds familiar, huh? I wonder why? Something about not remembering your history or you will repeat it?)

Then in 1926, along came one of the most powerful storms to hit south Florida in years, and the meteoric rise of Joseph Young’s Hollywood-by-the-Sea got stopped in its proverbial tracks. In practically no time, the population of Hollywood dropped to 2,500, many leaving mortgages unpaid with Joseph Young left holding the bag.

Horvitz dropped out of school during the 8thgrade after his father died. He made a living shining shoes, all the while reading and educating himself. When he married, he joined his father-in-law’s paving business; he soon took over, and brought it to new heights.

Mr. Horvitz didn’t take criticism well. When his paving company received an unfavorable review in a local newspaper, he simply bought the paper. He went on to buy more publications during his business career.

During the frenzy of building activity in South Florida, Horvitz brought the Highway Construction Company of Ohio to Hollywood, and was busy paving the city’s beautiful streets all the way west to 46th Avenue.

And when the market went bust, Horvitz, President of Highway Construction Company, was holding a stack of signed contracts with Young, which were now unable to be fulfilled.

In a shrewd legal maneuver, the eighth-grade dropout Mr. Horvitz threatened to sue Young for breach of contract, unless he agreed to sign a document stating that he did indeed owe Horvitz two million dollars. In exchange for signing the document, he gave Young three months to scrounge up the owed amount.

Unfortunately, things only got worse for Young. He couldn’t pay Horvitz and then just like that, overnight, Mr. Joseph Young lost his dream and his city to a poor kid from the slums of Cleveland.

Many of the citizens resented this move by Horvitz, but some say had the tables been turned, Young would have done the same thing. It was just business.

Still, there remained a lingering animosity for years after this takeover. The local government became frustrated with having to deal with one entity owning so much undeveloped property in the city. In the years that followed, the city continuously pressured Horvitz’s Hollywood Inc. to release some of its holdings for development, but Sam held out, not selling a single parcel. The company maintained control of all its land instead of selling out cheap to developers, reasoning that it was the only way to ensure quality controlled planned development over piecemeal communities with no continuity.

Sounds a little like Mr. Young if you ask me.

Some of the paving work the Ohio Paving Company had done during the roaring twenties for Young included many of the streets west of 95. Streets and sidewalks were paved to nowhere, just waiting for development to come. Kids who grew up on the edges of the developed part of the city had miles and miles of sidewalks and roads on which to play. As time went on, the underused pathways became overgrown with vegetation.

After the war, while Fort Lauderdale and other neighboring cities were building out west, Hollywood Inc. sat on their holdings. The area remained undeveloped until the 1950s, when they finally started to finish the job that Joseph Young had started so long ago.

Soon after Sam Horvitz died, his son William took the reins of Hollywood Inc., and continued to fulfill his father’s and Joseph Young’s dreams.

In 1954, the company began extending the city westward, with carefully controlled development adhering to the concept of quality communities.

It finally started its first planned neighborhood adjacent to the Orangebrook golf course.

The Hollywood Hills section of Hollywood was a community of 5,000 homes on large lots with big swales and sidewalks. Soon after came Emerald Hills, and then the Hollywood Industrial Park.

Had this land been parceled out on the courthouse steps to individual builders who did their own thing with no regard for the type of community that Sam and Young envisioned, we may have had a very different tax base.

And rumor has it that Horwitz donated the land on which Memorial Regional Hospital was built, though this is completely unsubstantiated.

The last big parcel that Hollywood Inc. set off to complete was the area known as West Lake Park and North Beach.

These sensitive wetlands and coastline were going to be the final chapter in the completion of what Joe Young had planned for Hollywood (see article from 11/18). Unfortunately for Hollywood Inc., they saved the best for last, only to be too late.

Environmentalism had kicked in by this time, and the pressure to preserve our last remaining wetlands and beachfront was strong. The city realized that we had the last, intact, historic coastal barrier island and mangrove estuary.

The relationship between the city and Hollywood Inc. once again turned sour, when the company began planning to develop their last remaining Joe Young property. Hollywood Inc. was proposing high rise condos with as many as 3,500 units for the North Beach area, and a development of single family homes throughout West Lake.

Now, instead of begging Hollywood Inc. to develop its holdings, the city was trying to do everything in their power to stop the company from developing.

Ironic how the roles were reversed.

At the end of the day the city won out, and Hollywood Inc. sold its holdings to the county to be preserved for future generations.

As a result, Hollywood remains the location of one of the largest coastal natural areas in South Florida.

Our historic development is our strength and our asset.

So, although he was initially resented at the time of the takeover and in the years that followed, Sam Horvitz turned out to be good for Hollywood. He was a man with a vision, or should we say a man who shared the same vision as the founding father of the city we live in today.

Every year in Hollywood, we celebrate Founder’s Day on Joseph Young’s birthday. Perhaps, from now on we should add a toast to what one newspaper called our city’s Stepfather, Sam Horvitz, as well.

Published with thanks as always to our friends at the Hollywood Historical Society.