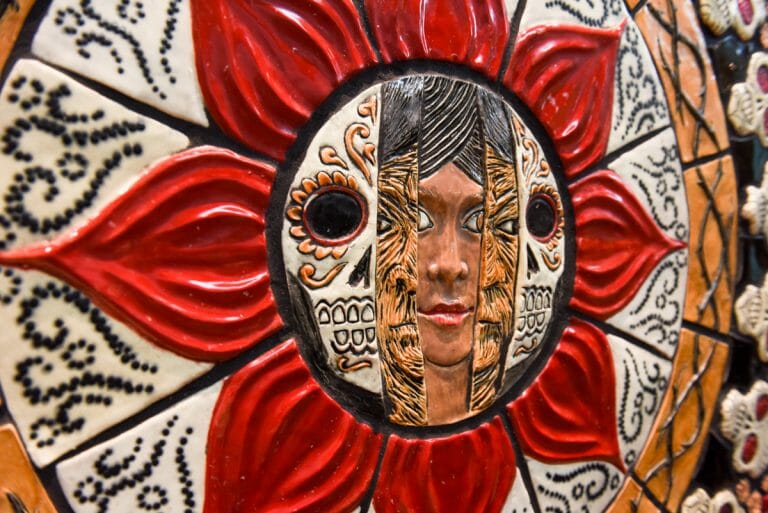 The first ZES opened on Las Olas Blvd, in July 2019, and the second, at 2021 Hollywood Blvd, followed in November.  Through their databases and social channels including ZES quickly found the first five artists to fill the space. Over 100 had applied.

“I was not connected with many other artists here in Hollywood,” shared local artist LuRu Rudawsky, owner of Tortuga Tile Works, and one of the first to come on board.

Rudawsky said that her business had outgrown the craft show circuit, and she had been working at home and out of the public eye for four years.

“I was really starting to lose that connection with other artists,” she declared. “Coming in here and working with the other artists — it’s just a different environment, and it’s not in an industrial space, it’s on a thoroughfare. And having interested people come in — during the last ArtWalk, we were so busy, all night, we literally had to push people out the door at 11:15!”

“Where else can you have some local culture purveyor bringing interested people into your space and giving you a platform and a microphone to talk?” interjected Snow. “ The last one we had almost 50 people!”

“You actually have some of the most prolific artists in South Florida living in Hollywood,” noted Martineau. “And I would say not just your everyday artists, but really accomplished artists that have actually done major shows. That’s one of the reasons why we were so excited to be able to have this space.”

The way-below-market rent, generally about $300 to $600 per month, includes utilities and liability insurance. All studios are accessible to artists 24/7, and the agreements require that the space be activated daily, with the artists rotating the schedule. Each artist also is given their own page on the ZES website.

While the temporary nature of the lease could be a detriment to the occasional artist, the benefits far outweigh the issue. Indeed, that very fluidity is one of the biggest benefits to the property owners. Snow reports several inquiries into long-term leases in the Las Olas locations, with two new tenants signed.

“In our first Las Olas space,” Snow recalled, “a guy, who eventually became the future tenant, came in and said ‘I like the energy in the space’.  Well, no art studio, no energy, probably no tenant.”

Creative marketing consultancy UniteUs Group is the company behind Zero Empty Spaces and Choose954, as well as Art Fort Lauderdale, the Fort Lauderdale Art & Design Week, FemAle Brew Fest and other cultural and community events and initiatives.  ZES currently has locations at Beach Place on Fort Lauderdale Beach, the Galt Ocean Mile, and is now preparing to open in Old Town Pompano Beach.

“In three years we’ve done over 250 events,” reported Snow. “We’ve had over 50 talks as part of the speaker series that we host. We’ve had four art fairs, and two art weeks. We have 21 artists in four artists’ studios. We have a beer week and a beer festival, and I’ve done over 70 podcasts.”

“Everything is aimed at cultivating culture and community, which is our overall mission and goal for this project.”

At this time, the firm has four businesses and a non-profit, all self-funded and Broward-centric. Snow reports that they have received multiple inquiries asking about Zero Empty Spaces in other cities, but that for now, they’re concentrating on building Broward.

“We’re really the only non-non-profit entity that’s actually doing this initiative, at least in Florida,” he believes.

With these low rents and self-funded projects, how is this non-non-profit making a profit?

“The answer,” said Martineau, “is that by doing this, essentially we have the biggest accumulation of affordable artist studio spaces in South Florida, and potentially in Florida.

“And for us, it’s all about having more spaces. We’re big believers that a rising tide raises all ships, and if we can sustain this without losing money, and we keep building this, we’ll have this really robust creative community, and we’re all going to benefit later on, and so it’s more of that bigger picture kind of vision.”

“It’s not something that we’re getting wealthy off of,” continued Snow, “but it’s more of that long vision of trying to build a community. As we start having more and more artists working together, you are going to really start seeing things just start to spring up off of that. Even now, people are coming up with other ideas for other spaces for activating more of the Boulevard.”

Martineau and Snow want everyone to know that throughout its infancy, no one has been more supportive of the concept of Zero Empty Spaces than the Hollywood CRA and the people of Hollywood.

“It has been rewarding to see and experience the Hollywood community embrace the Zero Empty Spaces Downtown Hollywood location,” said Lisa Liotta, Redevelopment & Operations Manager for the City of Hollywood CRA. “Their opening and presence has further enhanced Downtown Hollywood’s ‘art-centric’ brand and provides yet another reason to visit and patronize Downtown Hollywood.”